The first repatriation flight from India following the government’s controversial travel ban is now expected to arrive in the Northern Territory half full.

More than 70 people who hoped to return to Australia from the COVID-stricken country will not be allowed to board the aircraft.

Around 40 of those people returned a positive COVID-19 test on Friday (AEDT), with a further 30 identified as their close contacts.

The flight has the capacity to seat 150 people, meaning less than half of those expected to return to Australia on Saturday will be on the plane.

It is highly unlikely that anyone will be able to fill those empty seats, without sufficient time to obtain a COVID-19 test.

There could also be more passengers barred as rapid antigen test results are returned later on Friday evening. 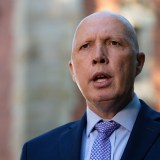 We can cope with India arrivals: Dutton 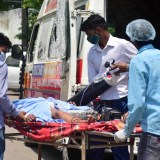 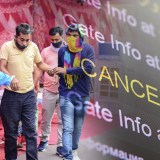 Parentless in India: The 173 unaccompanied children desperate to come home

Both the PCR and rapid antigen tests are a prerequisite for being able to board.

The 26 per cent positive rate is far higher than the 3.5 per cent rate registered in passengers on the March repatriation flights.

The Department of Foreign Affairs and Trade is working to put other passengers on the flight but it may prove difficult given the testing requirements.

Anyone hoping to take up a repatriation flight must be tested for COVID-19 at least 48 hours before boarding.

The government has made it clear that it would prioritise bringing home the most vulnerable people from India following the lifting of the ban.

But Prime Minister Scott Morrison was also adamant anyone hoping to come home would first need to test negative to the deadly virus.

Australia’s High Commissioner to India Barry O’Farrell said while it was disappointing that those people will have to remain in India, the flight is still performing a valuable role.

“Obviously, I’m disappointed, as are those Australians who will not be on today’s flight,” Mr O’Farrell said.

But he said the flight would serve a “double blessing” as it was carrying vital medical supplies to India as well as bringing Australians home.

Mr O’Farrell also said that those who had tested positive and their family members would still be considered vulnerable and would be given priority on future flights.

Australian citizen Sunny Joura has been stranded in India since May 2020 and was due to board the first repatriation flight.

Mr Joura told the ABC he had received a positive COVID-19 test on Friday.

He said that before the flight ban was put in place, he had tested negative and would have been able to return at that time.

An “extremely disappointed” Mr Joura had a message for the Australian government.

“Get your act together please, get more quarantine facilities,” Mr Joura said.

“I’m not saying that if I’m positive take me on the flight, but there were opportunities in the past; this is the third time my flight got cancelled.”

“If I die, the Australian government will be responsible.”

Mr Joura said he suspects he may have caught the virus in the hotel where he is staying as part of the repatriation process.

The travel ban made it a criminal offence for anyone to enter Australia if they had been in India in the 14 days prior to arrival, with a penalty of up to five years jail and a fine of more than $65,000.

Meanwhile the number of COVID-19 cases in India has surpassed 24 million, while its virus death toll has risen to more than 262,000.

India has reported 343,144 new coronavirus cases in the 24 hours to Friday afternoon, taking its overall caseload past the 24 million mark, while deaths from COVID-19 rose by 4000 in one day.

The South Asian nation has added nearly 1.4 million cases and over 16,000 deaths this week alone.

Its total caseload stands at 24.05 million while total fatalities are at 262,317, according to health ministry data on Friday.