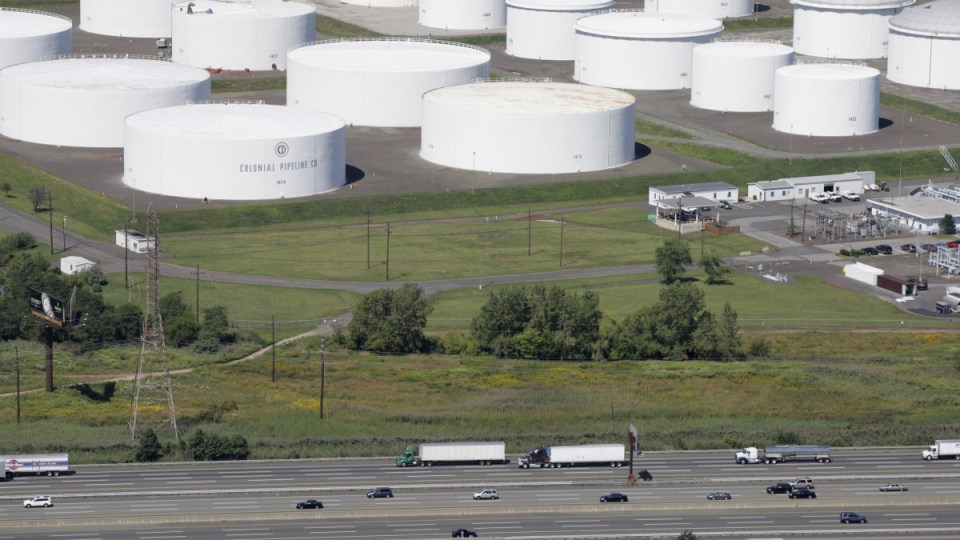 The Colonial Pipeline Company shut down its network after a cyber attack. Photo: AP

The biggest US petrol pipeline will not resume full operations for several more days due to a ransomware cyberattack blamed on a shadowy criminal network called DarkSide.

The attack on the Colonial Pipeline, which carries nearly half the fuel consumed along the US east coast, is one of the most disruptive digital ransom schemes ever reported.

While the impact remains to be quantified, the pipeline shutdown will reduce fuel availability in the near term, push up prices and force refiners to cut production because they have no way to ship the fuel.

The privately owned company said on Monday it was working on restarting in phases with “the goal of substantially restoring operational service by the end of the week”.

The FBI attributed the cyberattack to DarkSide, a group believed to be based in Russia or Eastern Europe. Its ransomware targets computers that do not use keyboards in the languages of former Soviet republics, cyber experts said.

President Joe Biden said there was no evidence thus far that Russia’s government was involved.

A statement issued in the group’s name on Monday said: “Our goal is to make money, and not creating problems for society.” Its statement did not mention Colonial Pipeline by name.

Ransomware is a type of malware designed to lock computers by encrypting data. The hackers demand payment to let the owner regain access. It is unknown how much money the hackers are seeking, and Colonial has not commented on whether it would pay.

Anne Neuberger, deputy national security adviser for cybersecurity, told reporters the Biden administration was not offering advice on whether Colonial should pay the ransom.

Colonial on Friday shut its 8850-kilometre pipeline network, which moves fuels including petrol, diesel and jet fuel, to protect its systems.

Colonial restarted some smaller lines on Sunday between fuel terminals and customer delivery points, releasing fuel stored locally to customers. On Monday, it also began manually operating its 700,000-barrel-per-day multi-product fuel line between Greensboro, North Carolina, and Maryland for a limited time while it has existing inventories.

The outage hit before the summer holiday season, when petrol demand and airline travel tend to peak.

The American Automobile Association said the national average petrol price climbed to $US2.96 ($3.78) a gallon and could climb to its highest level since 2014.

If the disruption stretches on, fuel suppliers could ship by truck and rail instead. The Department of Transportation on Sunday lifted driver restrictions on fuel haulers in 17 states affected by the shutdown.

US fuel importers are booking tankers to bring petrol from Europe. US refiners including Motiva Enterprises and Total cut output at Gulf Coast plants on Monday because of a lack of transport.