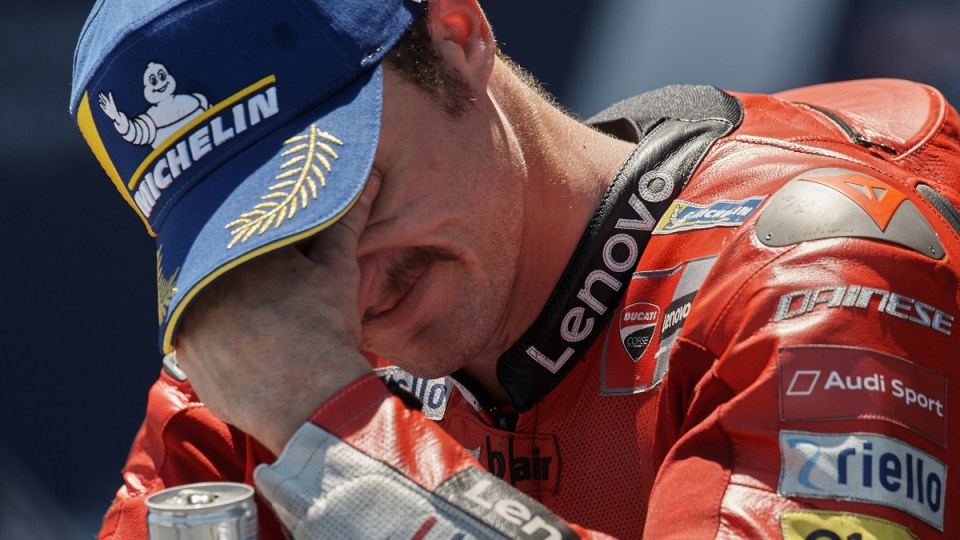 Australian daredevil Jack Miller has for so long been seen as a fun-loving, outspoken and gutsy nearly-man in the MotoGP world – but now, more importantly, he can see himself as a winner.

It was an emotional Sunday for the popular Townsville rider after enduring the most wretched of starts to the season as he finally landed his first triumph in five years – and only the second MotoGP win of his career – at the Spanish Grand Prix at the famed Jerez track.

The crazy, exultant scenes among his Ducati team as they engulfed the Queenslander with hugs gave an idea of just how well-received the victory was in Miller’s 103rd Moto GP race.

The reason for that is simple: everyone likes Jack.

But the 26-year-old’s jovial nature had been tested like never before in 2021 as his big chance as a Ducati factory rider seemed to be passing him by as Miller found himself embroiled in a whole series of unwelcome dramas.

He’d had two under-par ninth-place finishes followed by a crash last time out, and he’d also undergone surgery three weeks before when he suffered from ‘arm pump’.

He also had to come off social media for a week after being criticised online for his part in a high-speed clash with world champion, Joan Mir, who had accused him of dangerous riding.

But, finally, the man who had started the season as one of the favourites for the title after superb pre-season testing, got it all right in his first win since a Dutch Grand Prix triumph in 2016.

He’s been close a few times in the intervening years – second three times and third on six occasions – but he reckoned this triumph, that thrusts him from 12th to sixth in the championship, was the “most precise” race he’d ever delivered.

He was brilliant from the start, powering from third on the grid to immediately grab the lead before Yamaha’s Fabio Quartararo had the pace to overhaul him by the end of the fourth lap.

But, when the French leader himself struggled with his own ‘arm pump’ issues, his form dipped and Miller regained the lead with 11 circuits left, forged clear and then repelled a late charge from his teammate, runner-up and new championship leader Francesco Bagnaia, to win by 1.9 seconds.

“I’ve never rode that precise, that good in my whole entire life. I don’t think I’ve done 25 laps in a row like that in my life. It’s out of this world, honestly,” Miller said of his win.

“Ever since that chequered flag, I’ve been on this bloody rollercoaster and it just keeps going.

“I’m crying and I’m sobbing like a baby, next minute I’m so angry.

“I don’t know, it’s too hard to put into words what I feel today.”

This win, he reckoned, was much harder than his Dutch race.

“This one I’ve definitely worked my arse off to get,” he smiled.

He offered a big thank you to his team for sticking by him when many in the sport were beginning to question whether the Italian outfit had made a bad decision in throwing their resources behind a maverick.

“I want to thank them for believing in me,” he said.

And to his parents back home in Queensland, he had a similiar message.

“I know they’ll be celebrating. I can’t thank my mum and dad enough. It’s just a flood of emotions right now.”

‘Out of this world’: Miller time as Aussie enjoys emotional win