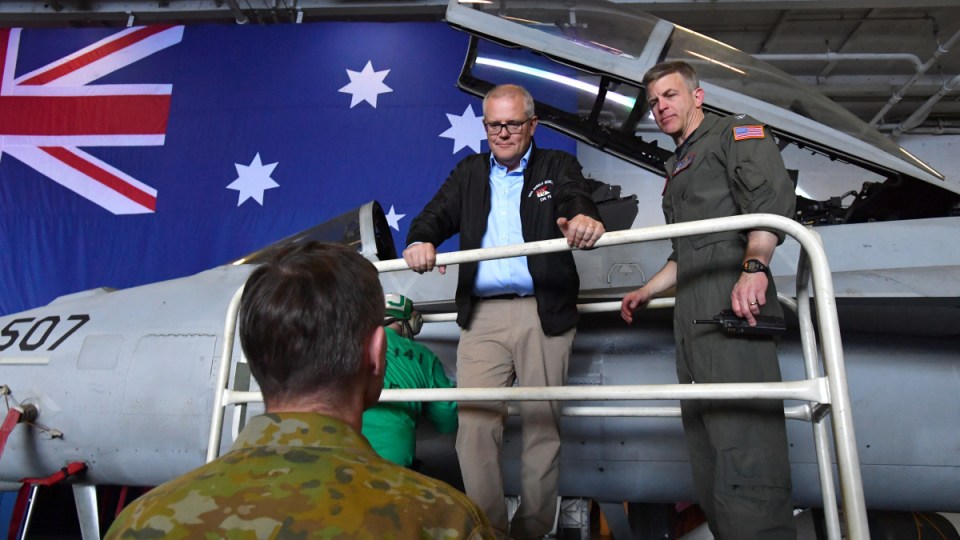 Prime Minister Scott Morrison, seen here in 2019 with the Commanding officer of the USS Ronald Reagan during a joint training exercise, is expected to announce sweeping upgrades of military training bases on a visit to the Northern Territory. Photo: AAP

The federal government has earmarked almost one billion dollars to upgrade Northern Territory military training bases and ranges used by both the Australian Defence Force (ADF) and US Marines.

The upgrades are seen as preparing for expanded “war gaming exercises” with the United States and come as tensions grow over China’s expansion into the South China Sea and its threats to invade Taiwan.

The spending is part of a previously announced joint Australian and US government program to invest $2 billion on infrastructure works and facilities at existing ADF sites in the NT.

The move follows Home Affairs Department secretary Michael Pezzullo’s warning the “drums of war are beating”. In his Anzac Day message to staff, Pezzullo said Australia must be prepared “to send off, yet again, our warriors to fight”.

Pezzullo’s message came amid growing military tensions between China and the US over Taiwan, and in it he highlighted the “protection afforded to Australia” by its 70-year-old ANZUS military alliance with the US and New Zealand.

Prime Minister Scott Morrison is expected to travel to Darwin on Wednesday to announce the five-year $747 million defence infrastructure package.

The four bases in line for the funding are used by the ADF and US marines based in the Top End.

The overhaul is expected to include upgrading weapons firing ranges, lengthening the Northern Territory’s Bradshaw Field Training Area airstrip to support heavier aircraft, and new training facilities for ADF personnel and US marines.

“Working with the United States, our allies and Indo-Pacific neighbours, we will continue to advance Australia’s interests by investing in the Australian Defence Force, particularly across Northern Australia,” Mr Morrison said in a statement, published by The Australian.

“Our focus is on pursuing peace, stability and a free and open Indo-Pacific, with a world order that favours freedom.