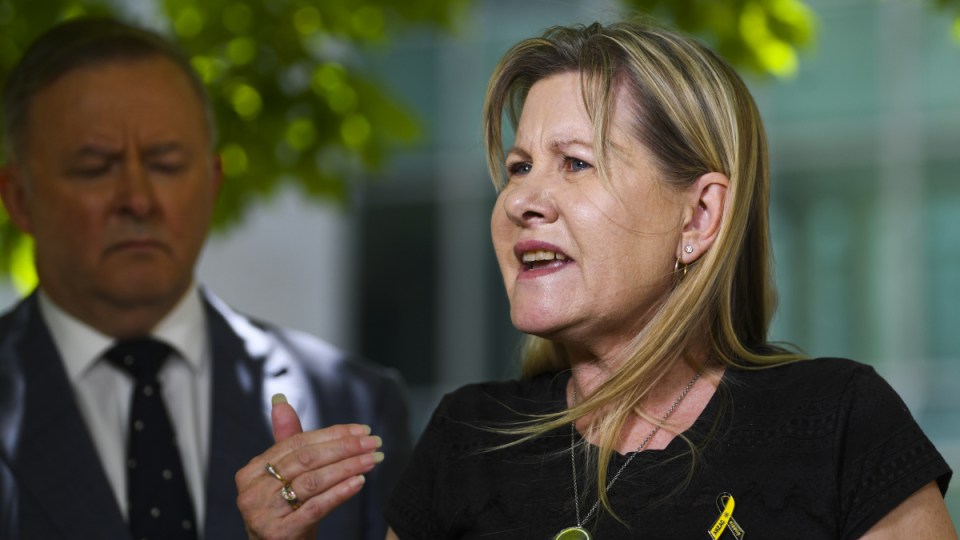 Julie-Ann Finney, mother of the late veteran Dave Finney, spoke out about the terms of the royal commission. Photo: AAP

Veterans’ advocates have warned of “major flaws” in the government’s proposed royal commission into suicide, blasting Scott Morrison’s proposal that the inquiry not make findings of criminal wrongdoing.

Even as defence groups and former soldiers cautiously welcome the long-awaited confirmation of the royal commission, many have warned it will only be the first step in a long process.

The PM said the royal commission, expected to begin in July, will probe “unacceptably high” rates of suicide in the defence force.

The inquiry will run for up to two years, and is currently out for a four-week consultation period.

The draft terms of reference call for an investigation into “systemic issues” including recruitment and transition into the Defence Force, training, quality and availability of health and support services, monitoring of mental health, and family support services.

But one particular part of the draft terms has already been met with criticism.

The condition the royal commission “will not be required to make findings of civil or criminal wrongdoing or findings about individual defence and veteran deaths by suicide” has been labelled a major shortcoming.

Retired Army officer Stuart McCarthy said the inquiry would be “flawed” if it did not address misconduct by specific officers.

“Unless the royal commission is empowered explicitly to do that, it’s not going to get to the bottom of all the matters that need to be fully dealt with that are contributing to the suicide problem,” he told The New Daily.

Previous royal commissions, like the 2014 inquiry into trade unions, have made recommendations of criminal charges.

Mr McCarthy, whose 28 years in the army included deployments to Afghanistan and Iraq before he was medically discharged in 2017, has been a long-time campaigner for a royal commission.

He has specifically pushed for help for soldiers who experienced serious side effects after taking anti-malarial drugs while on deployment, as well as pushing for wider accountability.

“One of the key factors contributing to suicidality among veterans is all sorts of abuse and cover-ups,” Mr McCarthy claimed.

He contributed a submission into the government’s proposed legislated national commissioner last year, calling for a royal commission with specific powers to “investigate evidence or allegations of criminal misconduct”.

“I’m contacted almost every day by veterans or their family members who are suicidal. This is something that has been needed for years,” Mr McCarthy said.

“I’ve been making very specific requests for help for specific individuals, who haven’t had that help and ended their own lives. This is very close to me, and I’m not the only one.”

She echoed similar sentiments to Mr McCarthy about the terms of reference excluding criminal findings.

“I wasn’t happy when I first heard that,” she said, when asked about that provision on the ABC’s Radio National on Monday night.

“We need to make recommendations that charges be laid … We need to be recommending charges where necessary.”

Veterans and families have long pushed for a royal commission, as have Senator Jacqui Lambie and the Labor opposition.

But the government previously rebuffed suggestions of a royal commission, preferring separate plans for a permanent national commissioner on veterans’ suicide.

Ms Finney said she was “thrilled” the government had established the royal commission, but warned officials to “get it completely right”.

She also pushed back against Mr Morrison’s pledge to separately set up the national commissioner, a plan already rejected once by the Senate, to run in parallel with the royal commission.

She called for that body to not be brought in now, as Mr Morrison proposed, and only be established if recommended by the royal commission.

When asked if it was the type of royal commission she hoped for, she said “no”.

Opposition Leader Anthony Albanese said it was “about time” the government established the royal commission, but echoed Ms Finney’s concerns about the national commissioner.

“Labor, along with many in the veteran community, has said it is open to a permanent body to tackle this issue, but only if this is a recommendation coming out of an independent royal commission, which must happen first,” he said in a statement.

Senator Lambie, an army veteran, has pushed for a veterans royal commission since she entered Parliament.

She said it was “desperately needed”.

“We can all rest a little easier tonight knowing that our time to be heard is coming. This is the first step to getting veterans the justice they deserve.”