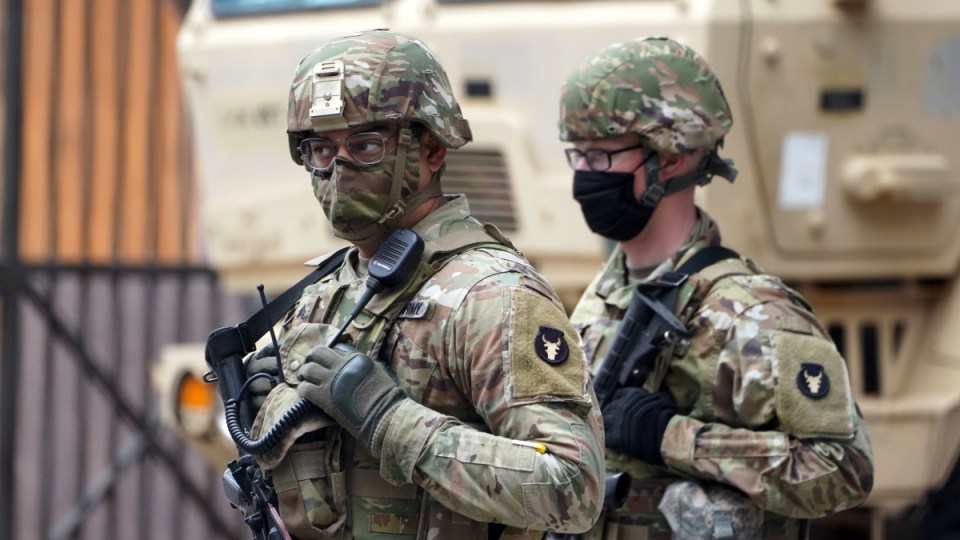 National Guard members at an intersection in downtown Minneapolis, shortly ahead of the jury going out to consider its verdict. Photo: AAP

Police departments across the US are preparing for further protests as lawyers present their closing arguments in the trial of former Minneapolis policeman Derek Chauvin, accused of the murder of  George Floyd.

Mr Floyd’s death in May 2020, during his arrest by Mr Chauvin, sparked the global Black Lives Matter protests.

In Minneapolis, plans are in place to clear government buildings in advance of the verdict, and the tower where the courtroom sits is ringed by barbed wire, high barriers and armed soldiers from the National Guard.

Nearby businesses have boarded up their windows.

During the trial, over and over again, Steve Schleicher, a prosecutor with the Minnesota attorney general’s office, has repeated the phrase: “Nine minutes and 29 seconds” – the length of time Mr Chauvin was captured on video kneeling on the dying Floyd’s neck.

Mr Schleicher emphasised that the jury was weighing the guilt of only one man, although their verdict will nonetheless be widely seen as a reckoning in the way the US polices black people.

“This is not a prosecution of the police,” Mr Schleicher told jurors.

He cited the motto of the Minneapolis Police Department, which fired Mr Chauvin and three other officers involved the day after Mr Floyd’s arrest: “To protect with courage and to serve with compassion.”

Mr Chauvin, who is white, pushed his knee into the neck of Mr Floyd, a 46-year-old handcuffed black man, outside the grocery store that had accused Mr Floyd of using a counterfeit US$20 banknote to buy cigarettes.

“George Floyd was not a threat to anyone,” Mr Schleicher said.

“He was trapped with the unyielding pavement beneath him, as unyielding as the men who held him down,” Mr Schleicher said before playing some of the extensive video of Floyd’s death.

He waived his right to testify before the jurors and his lead lawyer, Eric Nelson, was due to present his own closing argument later on Monday.

Chauvin says he was following his training

Mr Chauvin’s lawyers argued that he correctly followed the training he received over 19 years with the Minneapolis Police Department and sought to raise doubts about the cause of Mr Floyd’s death.

For the second-degree murder charge, 12 jurors will have to agree that prosecutors proved beyond a reasonable doubt that Mr Chauvin committed a felony, in this case assault, that was a substantial cause in Mr Floyd’s death.

They do not have to find that the police officer intended to kill Mr Floyd.

That crime carries a punishment of up to 40 years in prison, although Minnesota sentencing guidelines call for a shorter sentence of up to 15 years for someone such as Mr Chauvin with no prior convictions.

US news networks carried live broadcasts of much of the testimony after the first of more than 40 witnesses took the stand three weeks ago, although the coverage was sometimes interrupted by fresh episodes of police violence caught on camera.

The closest instance occurred just a few kilometres from the courthouse in downtown Minneapolis when a white police officer fatally shot a black motorist, Daunte Wright, on April 11 in the suburb of Brooklyn Centre after trying to arrest him on the belief he had missed a court appearance.

The officer, Kimberly Potter, had meant to use her Taser to stop him driving away but pulled out the wrong weapon, police say.

She has been charged with manslaughter.