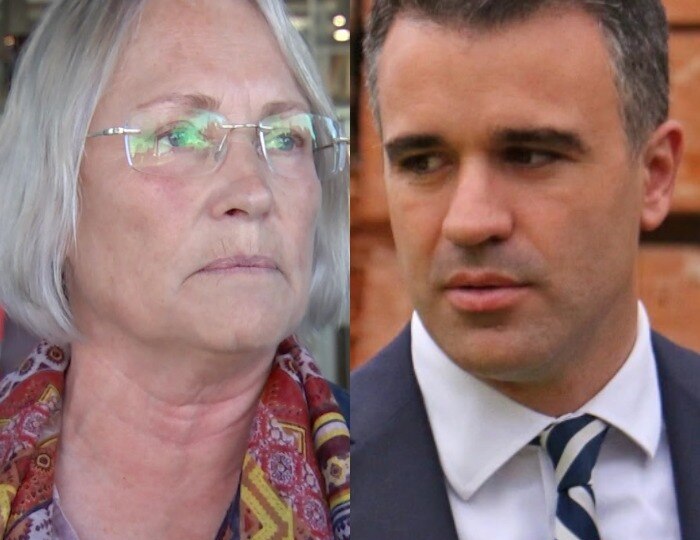 A former South Australia Labor MP and her husband have been arrested and charged with blackmail offences, after allegedly threatening the leader of the opposition Peter Malinauskas.

Annabel Digance was a Labor MP in South Australia from 2014, until her defeat at the 2018 state election.

Police said shortly after 7:00am this morning, a 60-year-old man and a 63-year-old woman were arrested at a property in Strathalbyn, south of Adelaide.

Police say they have been charged with blackmail, which has a maximum penalty of 15 years imprisonment.

Ms Digance and husband Greg will appear in the Adelaide Magistrates Court later on Wednesday.

Ms Digance has recently spoken out about what she described as bullying and intimidation by the Labor Party.

She said she was intimidated into not speaking out about a racist flyer which was used as part of her 2014 election campaign.

Ms Digance spoke out about the flyer — which targeted a Liberal candidate — just over a fortnight ago prompting an apology from state secretary Reggie Martin, who approved it.

The flyer asked: “Can you trust Habib?” and featured a wall ridden with bullet holes.

Carolyn Habib — who has since married and changed her name to Carolyn Power — lost the 2014 election to Ms Digance but won in 2018.

Ms Digance said she and her family had “suffered from this pamphlet as well” because of the impact on her reputation.

“I was named racist, my husband was labelled racist as well, so we had our surname associated with being apparently racist. We are not racist people,” she said.

Digance said she would not rule out another run

At the time of her comments about the flyer, Ms Digance was asked about a possible political comeback and said she had “categorically” not had any preselection discussions with Labor ahead of the 2022 state election.

But she did not rule out running if the opportunity arose.

“I would never say no to any opportunity, I think life can deal some really interesting opportunities,” she said.

Ms Digance is currently an associate professor at Flinders University’s College of Business, Government and Law, where she has lectured in health administration with a focus on aged care and ethics.

She has worked as a nurse and a midwife, and her university profile also lists her as leading a family retail business with up to 100 employees.

She was the Australian College of Midwives’ SA chapter’s midwifery advocate of the year in 2017.