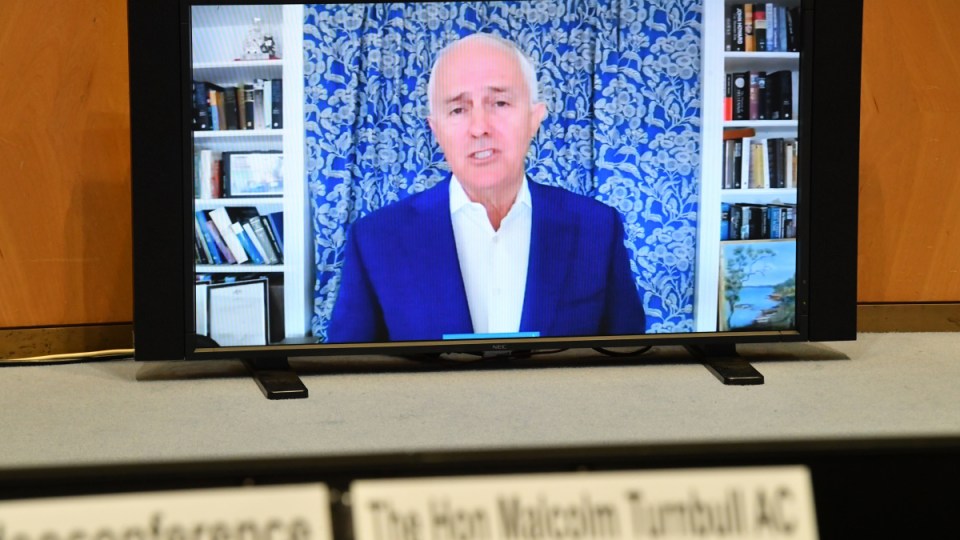 Malcolm Turnbull has accused News Corp of “terrorist” tactics, alleging there was an “unhinged” plan to depose him and return Tony Abbott as prime minister.

“There is now a market for crazy,” Mr Turnbull claimed.

“We face a real threat to our democracy.”

A new report, also released on Monday, revealed News Corp owns nearly 60 per cent of the metro and national print media market, earns 40 per cent of TV revenues, and is part of a profitable trio controlling a mind-boggling 90 per cent of metro radio licences.

Mr Turnbull has repeatedly and ferociously criticised News Corp – owner of The Australian, the Daily Telegraph and Sky News among other outlets – since he was ousted as PM in 2018.

He joined fellow former PM Kevin Rudd in calling for a royal commission into the Murdoch empire, a campaign that led to the Senate convening an inquiry into media diversity.

On Monday, Mr Turnbull appeared before that inquiry via video link and levelled another series of blistering critiques of the company.

“The most powerful political actor in Australia is not the Liberal Party or the National Party or the Labor Party. It is News Corporation, and it is utterly unaccountable,” Mr Turnbull told the inquiry.

“News Corp has evolved from being a traditional news or journalistic organisation, to one that is essentially like a political party, but a party with only one member.”

“What is so frustrating is that these voices on the populist right, particularly from Murdoch’s organisation, are essentially doing the work of the terrorists,” Mr Turnbull said, in one particularly explosive allegation.

The former prime minister has regularly compared the tactics of his opponents to those of terrorists.

Mr Turnbull last week called News Corp “thugs” and “bullies” after he was sacked as chair of a NSW government climate change board, which he claimed came after a campaign against him in the Daily Telegraph.

On Monday, he claimed the news company had a particular “vendetta” against him, including during the 2018 leadership challenge that saw him ousted and Scott Morrison promoted as PM.

Mr Turnbull claimed Rupert Murdoch had “acknowledged” News Corp editors were trying to bring him down, in what he claimed was an attempt to reinstate former PM Tony Abbott.

“There was this crazy agenda that Rupert acknowledged to me, that was being pushed by [then-Daily Telegraph editor] Paul Whittaker, and apparently with Lachlan [Murdoch]’s support, which was that my leadership should be overthrown or damaged to an extent that, one way or another, we would lose the 2019 election and Tony Abbott could come back as opposition leader and then return us to glorious victory in 2022,” Mr Turnbull told the inquiry.

“This sounds completely unhinged, and it may well be so, but there’s no doubt that was being undertaken.”

Mr Guthrie, a former editor at The Age and Herald Sun newspapers, later said he thought of News Corp as an “intimidating force”.

He said he was sacked as editor at Melbourne’s Herald Sun in 2008 after he “reported too vigorously on a friend of a Murdoch”.

He also spoke of being reprimanded for profiling celebrities who featured on an unwritten “black list” of those disliked by the Murdoch family – including TV presenter Andrew Denton.

In a statement to the committee, Mr Guthrie, who has also edited The Weekend Australian magazine, claimed News Corp reporting “increasingly … looks and reads like political boosterism”.

“That is now a fact of Australian life … there’s no realistic chance of going back,” he said.

Mr Fray said he hoped to see “government-assisted expansion” of the media industry, including a public fund to support start-ups and small newsrooms.

He also suggested giving Australians a tax credit for subscriptions to news sites, and fostering “news hub” partnerships between the ABC and smaller media outlets.