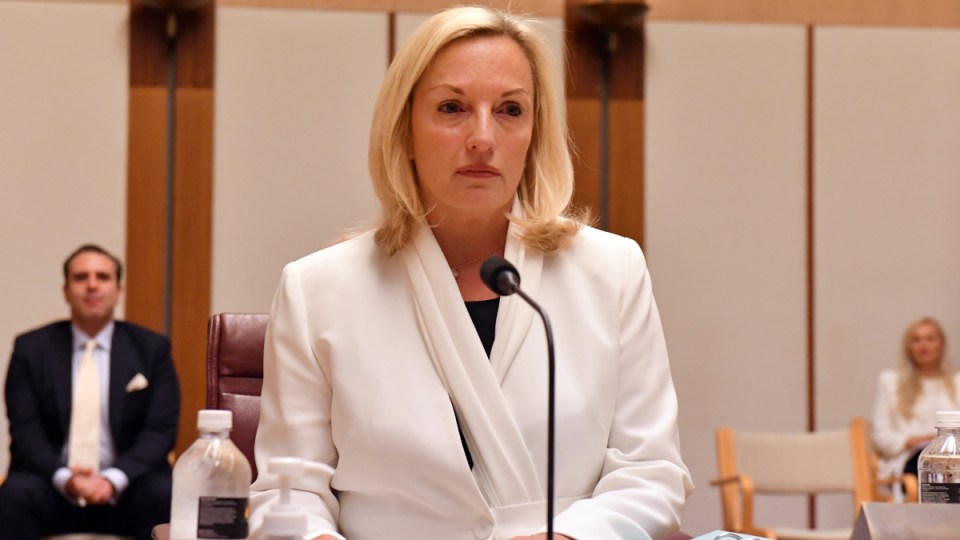 Christine Holgate before the Senate inquiry on Tuesday Photo: AAP

Christine Holgate has sensationally claimed Australia Post’s chair “bullied” her out of her job as CEO, saying she never agreed to stand down and that she was fired to “curry favour” with the federal government.

Ms Holgate, who was pushed out as Australia Post chief executive in late 2020 after it was revealed she bought luxury watches as bonuses for staff, claimed Prime Minister Scott Morrison “humiliated” her, despite her having “committing no offence”.

She said she was left “suicidal” and on medication following the high-profile criticism from Mr Morrison, and claimed she never agreed to stand down, alleging she was pushed out for political reasons.

In an explosive opening to Senate inquiry into the Cartier timepieces on Tuesday, Ms Holgate contrasted her sudden sacking to federal government ministers being allowed to stay in their jobs despite being accused of “terrible atrocities”.

“I was bullied out of my job … I was thrown under the bus so the chair of Australia Post could curry favour with his political masters,” she said.

“I don’t know why the Prime Minister took the action he did.”

“I’m putting to you that I was unlawfully stood down … I’ve only ever asked for respect, and I’ve never been allowed it.”

Ms Holgate revealed in an October Senate hearing she had approved the $20,000 purchase of four watches for employees who helped secure a $200 million deal to facilitate banking at post offices.

That admission was met with sudden outrage, with Mr Morrison standing up in Parliament just minutes later to thunder that “she has been instructed to stand aside. If she doesn’t wish to do that, she can go”. Labor leader Anthony Albanese said her position was “untenable”.

An internal investigation later cleared Ms Holgate of any wrongdoing. She has previously accused Australia Post chair Lucio Di Bartolomeo of lying about the circumstances in which she left the company. On Tuesday, she claimed she was pushed out by Mr Di Bartolomeo in an attempt to “curry favour” with communications minister Paul Fletcher, and that her purchase of the watches was well within established guidelines for spending.

“I have not done anything wrong,” she said on Tuesday.

“There was no basis to stand me down.”

On Tuesday, Ms Holgate – who appeared furious – took aim at both her former boss, and Mr Morrison. She said she was, in fact, authorised to spend up to $150,000 on such expenses, and that the watches had been signed off by the Australia Post board, and the expenses properly authorised.

“I lost my job, a job I loved, because I was humiliated by our Prime Minister for committing no offence,” she said.

Despite being forced out of her job, with her replacement as CEO named only on Monday, Ms Holgate claimed neither Mr Morrison nor any relevant minister had spoken to her directly about the watches incident.

Ms Holgate claimed she was told not to speak to media or other people about the episode, alleging Australia Post “silenced” her. She also said she was left suicidal and on psychological medication following the public criticism last year.

Ms Holgate said she had tried to meet with finance minister Simon Birmingham in the wake of the watches scandal, but that he did not agree to a meeting. She alleged she was “hung, run over by a bus, and reversed again” by Mr Morrison.

“You would have hoped I’d deserve the opportunity for either the minister nor the Prime Minister to speak to me,” Ms Holgate said.

She claimed Australia Post board member Tony Nutt, a former director of the Liberal Party, told her she was being stood down at the request of Mr Morrison. Ms Holgate alleged she was told by Mr Nutt “you have to understand, it is the Prime Minister so they needed to find something”.

She also disputed claims from Mr Di Bartolomeo that she had voluntarily stood down, saying she had never agreed to do so, and suggested the Senate formally request phone records of herself and Mr Nutt to verify her timeline of events. Ms Holgate said her lawyers had repeatedly asked Australia Post for any documentation proving she volunteered to stand down, but had been provided with none.

In protesting her treatment and criticisms from the government, Ms Holgate referenced a November investigation on Four Corners, which alleged misconduct by ministers Alan Tudge and Christian Porter.

“[Mr Morrison’s] response was, ‘that was two years ago’. I gave four watches in reward to people who brought an incredible contribution to Australia Post two years ago,” she said.

“He has people in his cabinet accused of the most terrible atrocities to women, proven with one of them, and they’re allowed to remain in their jobs and represent our country. I was forced to stand down.”

Mr Di Bartolomeo will appear before the inquiry later on Tuesday, along with other Australia Post executives.

Officials from the Department of Finance, which administers Australia Post, will also appear.

We are inviting men and women to unite to support an end to workplace bullying and encourage those around them not to look away. Bad things happen when good people do nothing. Often it is hard to know what to do as an individual. #WearWhite2Unite can make a difference. pic.twitter.com/LSoxtdSbub

“Thousands” of Australia Post employees and regular citizens had sent her letters of support, Ms Holgate said. She also referenced a solidarity campaign from Post employees, to wear white jackets in support of her Senate appearance – a reference to the jacket she wore on the day of the October Senate hearing, and on Tuesday.