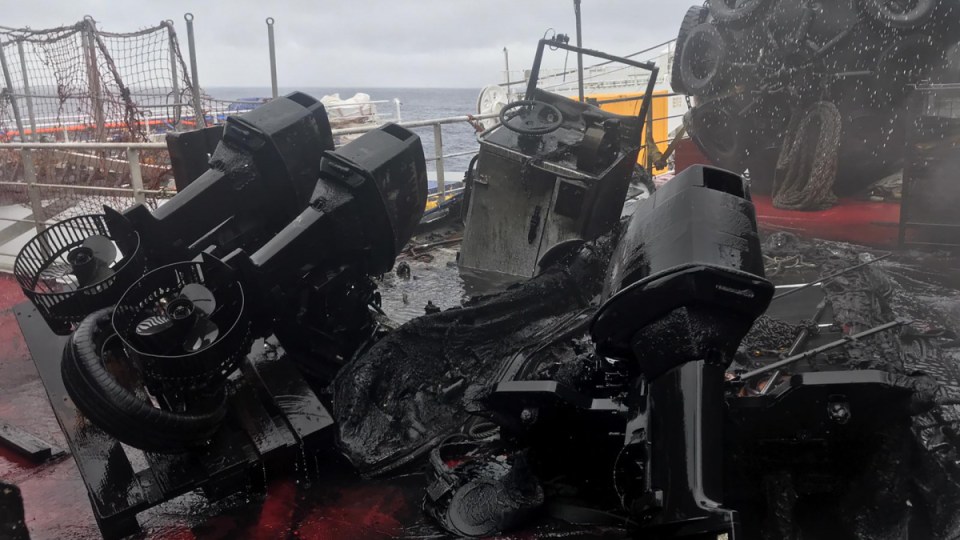 The damage caused by an engine room fire on the MPV Everest in the Southern Ocean. Photo: Australian Antarctic Division/AAP

Australia’s fire-damaged Antarctic resupply ship will soon return to the country carrying expeditioners, some who haven’t seen home in more than a year.

MPV Everest, sailing on auxiliary power after fire tore through its port side engine room last Monday, is expected to reach Fremantle on Tuesday night.

The chartered ship was originally set to dock in Hobart but was diverted to a closer port following the blaze, which destroyed two inflatable boats on deck.

None of the 109 people aboard, including some 70 expeditioners, were injured.

Some of them had been in Antarctica for almost 18 months, well beyond their scheduled stay due to coronavirus which played havoc with transport plans.

“When they left Australia, there was no COVID. They’re coming back to quite a different and changed world,” Australian Antarctic Division operations and safety manager Charlton Clark told AAP.

“They’ve done an outstanding job to respond to being away so long. It wasn’t intended for them to be away this long.”

A support ship sent from Fremantle is expected to rendezvous at sea on Tuesday with Everest, which has taken a more northerly route to dodge bad weather in the Southern Ocean.

UPDATE: Ahoy @AusAntarctic expeditioners onboard MPV Everest – a support vessel is on the way! Offshore tug GO Spica left Fremantle tonight and is heading south to meet MPV Everest and accompany it back to Freo. There’s now just 400nm between them – ETA Tuesday! pic.twitter.com/WwolfEYnor

“They’ve still got strong winds over 60 knots and big seas but it wasn’t anywhere near as bad as forecast,” Mr Clark said.

“For the last day or two they’ve actually had some favourable conditions and made pretty good progress.”

Mr Clark said expeditioners have been offered extra support and flights out of Western Australia have been arranged.

“The focus is getting our expeditioners home. I’m sure they’re quite keen to catch up with their loved ones,” he said.

The fire, which occurred four days into a two-week journey, is being investigated by the boat’s Dutch owners, the Maritime Safety Authority and the Australian Transport Safety Bureau.

Everest had been charted for this summer’s resupply trips after the delivery of Australia’s new $529 million icebreaker RSV Nuyina was delayed due to COVID.

It had made stops at Davis and Mawson research stations in Antarctica.