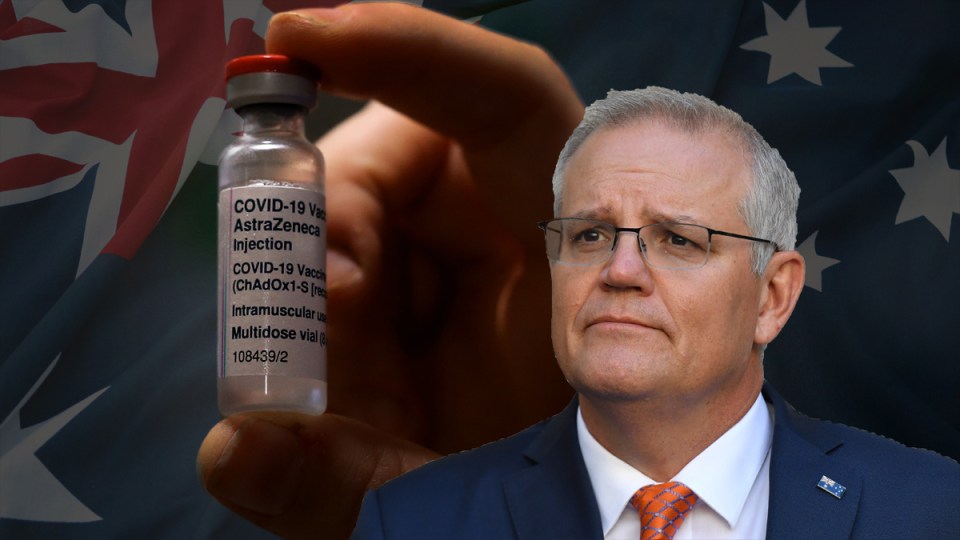 Australia’s embattled vaccine rollout has been dealt another major blow, with people under 50 recommended not to get the key vaccine the federal government has been relying on, forcing an urgent “recalibration” of the plan.

Following rare instances of blood clotting issues overseas, most younger Australians will not be given the AstraZeneca shot – a bombshell decision that could further delay the vaccination rollout past October, and mean lockdowns and the international border closure stretch into 2022.

“We expect that this will require some changes to the arrangements we have as part of the vaccination rollout,” Prime Minister Scott Morrison said at a snap briefing on Thursday night in Parliament House.

“This includes when we might expect our first doses to be able to be offered to all Australians.”

The Australian Technical Advisory Group on Immunisation (ATAGI) said the AstraZeneca vaccine was safe and effective for those older than 50, but that it should be given to those under 50 only “where benefit clearly outweighs risk for that individual’s circumstances”.

It is understood those under 50 will still have the choice to have the shot, but it will be a decision made in collaboration with a health professional.

Meanwhile, the Western Australian government has reacted and banned residents younger than 50 from getting the AstraZeneca COVID-19 vaccine.

WA chief health officer Andrew Robertson said from Friday, AstraZeneca vaccinations would be given only to those over 50.

“People under 50 who are booked in to receive their AstraZeneca vaccine will have their appointments cancelled,” he said.

People in the 1a and 1b vaccination program cohorts – including health workers – who are under 50 and have already had their first AstraZeneca vaccine, should “not be alarmed”. They should go ahead with their second jab.

“You should not cancel your second vaccination booking,” Dr Robertson said.

Tasmania followed WA with a similar decision on Friday morning.

Australia was relying on 54 million doses of AstraZeneca to vaccinate much of the population.

It has been repeatedly described as the “workhorse” or bedrock of the national vaccine rollout by federal ministers and health officials, who initially advised that most Aussies should expect to receive this shot.

“I want to reiterate that we are strongly encouraging those 50 and over to take up the AstraZeneca vaccine. It is a highly effective vaccine at preventing severe COVID,” Professor Murphy said.

ATAGI said it made the Thursday night ruling after growing evidence of “a rare but serious side effect involving thrombosis (clotting) with thrombocytopenia (low blood platelet count)”.

Australia’s caution does not go as far as Britain, which earlier on Thursday ordered a different vaccine be given to under-30s.

The issues have been found in just four to six cases per million vaccinations, Professor Kelly said.

Instead, Australia has recommended the Pfizer vaccine for younger people.

The Pfizer vaccine has a slightly higher efficacy rate against COVID than AstraZeneca. But Australia has contracts for only 20 million doses of Pfizer, with the company and government not able to give any solid timeline for delivery beyond “by the end of 2021”.

“We’re confident that, at some stage in the near future, we will get improved supply of Pfizer,” Professor Murphy said.

In contrast, AstraZeneca was the biggest piece of Australia’s vaccine plan, with 54 million doses.

The federal government had planned to offer all Australians at least their first vaccine shot of the two-dose Pfizer or AstraZeneca regimens by October.

That timeline was already in doubt due to the slower-than-hoped rollout, with fewer than one million Australians vaccinated, in contrast to earlier projections of four million by now.

Mr Morrison repeatedly refused to answer if the AstraZeneca decision would blow a hole in the October hopes, but admitted there would be forced changes to the rollout.

“There will be a recalibration of how the program will need to be adjusted to take into account the decision the government has taken,” Mr Morrison said on Thursday night.

“The longer-term timeframe for the program is being reviewed following this medical advice,” a written statement from Mr Morrison and Mr Hunt stated.

The federal government had tentatively pencilled in the end of October as a potential date to reopen Australia’s international borders.

It was no coincidence this was in line with the initial timeline to get all Australians vaccinated. Mr Morrison would not confirm whether the October deadline was now out of reach, but it will be difficult to reopen international borders if too few Australians are vaccinated.

“We’ve learnt this at seven this evening, and I think we have to take the time to assess the implications,” the PM said.

“When we’ve done that, we may be able to form a view. But I don’t think anyone should expect that any time soon. This will take some time to work through the implications.”

The federal government will likely come under renewed criticism from Labor, for locking in just three vaccine deals.

“The world’s best practice is to have five or six deals, so that we spread the risk around. We don’t know which vaccine is really going to come through,” Mr Bowen said.

It is not expected to be available until October. But Australia has 51 million doses on order, and the vaccine has scored highly in clinical trials – in the region of 95 per cent efficacy, on par with Pfizer.

However, clinical trials continue and Australia’s Therapeutic Goods Administration has not received an application to approve the jab.

Australia may now look at locking in further vaccine deals.

“We are now reviewing all of the vaccine purchases we’ve made. We have 51 million Novavax coming later in the year. We’re looking at when we can bring other vaccines forward,” Professor Murphy said.

The rollout plan changes are expected to be announced in coming days.

Amber Heard’s sister and friend give evidence
‘Should have been a penalty’: Boy crash-tackled by PM gives his verdict
Russian Google to file for bankruptcy
Man arrested at NSW school for bestiality
Concern about COVID-19 deaths in aged care
Oceans hotter and more acidic in 2021 as sea levels, human-induced greenhouse gases rise: WMO
Seven people who had the AstraZeneca vaccine tell us its side effects
Today's Stories