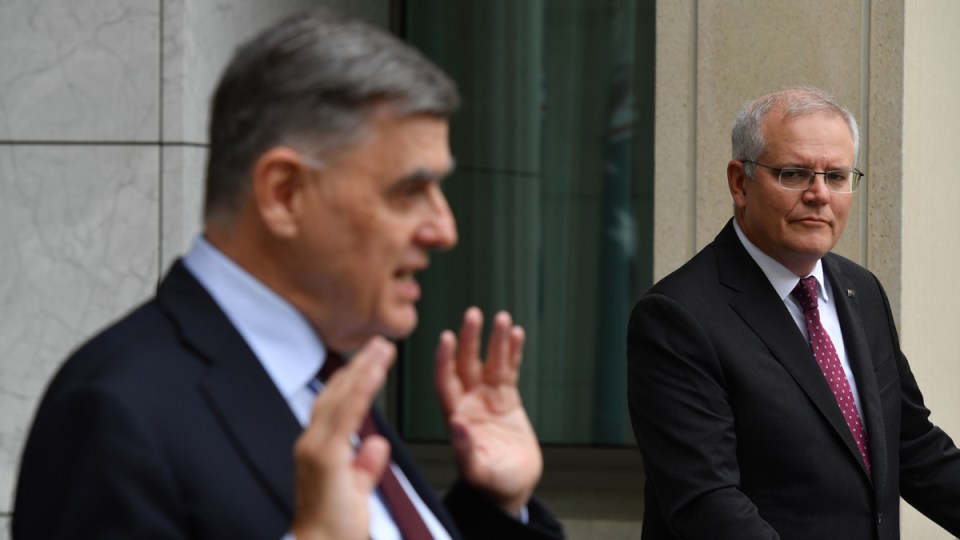 Scott Morrison has hastily walked back criticism of the European Union in explaining delays to Australia’s vaccine rollout, after the important trading partner shot down suggestions it was blocking doses destined for Down Under.

A tense public argument has broken out between Australian and European officials, after federal ministers slammed the EU for restricting vaccine exports and derailing our vaccine strategy.

It’s a claim the Europeans have tersely denied.

“[Vaccine exports from Europe] have not been approved. And if you’re not approving, it’s the same as effectively you’re blocking,” Treasurer Josh Frydenberg said on Wednesday morning.

The federal government has come under fire for one of the slowest vaccine rollouts in the world. Fewer than 900,000 Australians have been vaccinated in the six and a half weeks since the rollout began, with the nation languishing about 90th in the world for total jabs given.

Australia had ordered 3.8 million doses of the AstraZeneca vaccine from Europe, to be used before locally produced doses from Melbourne’s CSL plant became available. However, just 800,000 have arrived, following export restrictions from Europe.

The Australian government has long blamed European controls for the shortfall of three million vaccines. On Monday, deputy Nationals leader David Littleproud claimed the EU had “cut us short” and “undercut” the national vaccine rollout, saying Australia had been “badly let down” by the EU. Other senior government figures have also blamed European supply issues.

WATCH: Here's how the fight with the EU has intensified over the past 3 days. First up, David Littleproud on Monday morning. @10NewsFirst #auspol pic.twitter.com/qQtEsVjWt2

On Tuesday, Mr Morrison appeared to suggest the contracted doses had been blocked from being imported to Australia.

“In early January, we had anticipated we would have those 3.1 million vaccines,” he said.

“Those 3.1 million vaccines were not supplied to Australia, and that explains the difference between the numbers.

But overnight, EU spokesman Eric Mamer said there had been “no new decision to block vaccine exports to Australia or to any other country”. Instead, the EU insinuated AstraZeneca had actually not submitted export requests to ship doses to Australia.

Mr Frydenberg, speaking to the ABC, said that “not giving approval is effectively the same as blocking”.

Soon after, in a press conference of his own, the Prime Minister said he had “simply stated a fact” on Tuesday when he said there was a multimillion-dose shortfall. He tried to clean up any offence the Europeans might have taken at comments from his government.

“At no time yesterday did I make any comment about the actions of the European Union, nor did I indicate any of the background reasons for the lack of supply that we have received from those contracted doses,” he said at the swiftly-arranged Canberra press conference.

“Any suggestion that I, in any way, made any criticism of the European Union yesterday would be completely incorrect.”

Instead, Mr Morrison painstakingly set out the timeline from Australia’s point of view, including how 250,000 doses were blocked for export by the EU in February, and how the federal government had repeatedly asked the EU and AstraZeneca to release more doses since then.

Following Mr Mamer’s statement, the PM said he would again request the vaccines were released.

“I’ll be very pleased, as will [Health Minister Greg Hunt], to write to AstraZeneca, to seek the export licences for the full amount of the doses, the 3.8 million, to be provided to Australia,” Mr Morrison said.

One million of those doses, if they arrive, would be sent to Papua New Guinea as part of the federal government’s pledge to help the developing nation battle its own COVID outbreak.

“The only thing that is limiting the rollout is vaccine supply. And obviously, the initial issue with vaccine supply related to that 3.1 million doses of AstraZeneca, which really put us back in those first weeks because we didn’t have those doses,” Professor Murphy said.

Mr Morrison denied the government had erred in publicly pointing the finger at Europe for its vaccine delays.

The PM also batted away questions about why the government had not factored in such supply disruptions to its ambitious vaccine goals, such as the missed milestone of four million jabs by April.

“Circumstances change. There are a lot of variables in this process,” Mr Morrison said.

“Supply chains get disrupted. Medical evidence comes forward that requires us to address it, and may cause us to make changes to the program in the interests of public health.”

“There is an expectation of certainty and of guarantees here, that the environment does not provide for. It be very unwise to suggest that level of certainty exists around this. It simply doesn’t.”