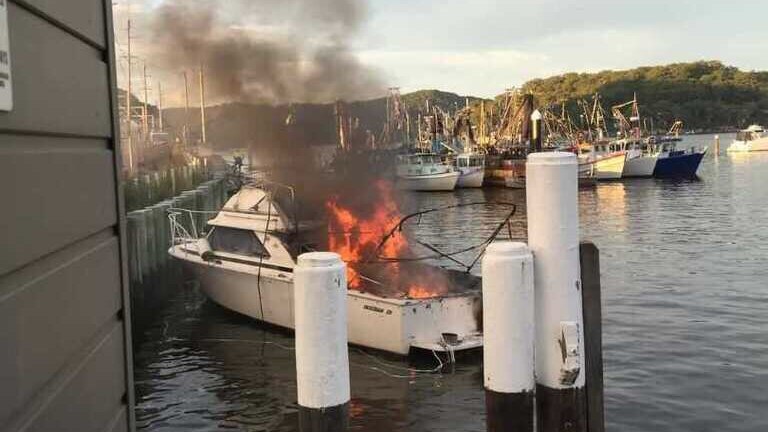 An Easter Sunday outing on the Hawkesbury River ends in disaster after eight people injured in a boat explosion. Photo: Fire And Rescue NSW

One woman remains in a critical condition and another three are now stable after a boat explosion north of Sydney on Easter Sunday.

A man and two women on board who were taken to Royal North Shore Hospital in a critical condition were downgraded to a serious but stable condition on Monday.

Another woman taken to the same hospital remains in a critical condition.

Earlier, four passengers were placed into induced comas after the 9-metre cruiser they were on on the Hawkesbury River north of Sydney exploded into flames on Easter Sunday afternoon.

They were part of a group of eight on board the boat, some of whom suffered smoke inhalation.

More than a dozen emergency search and rescue crews were called to a marina at Brooklyn near Dangar Island about 5.10pm on Sunday after reports a vessel was alight.

A mother and her daughter narrowly escaped serious injury after eight people suffered burns and smoke inhalation in the explosion.

Hornsby Group captain for the Rural Fire Service, Grant Wargren told the ABC there were two separate incident scenes, one with the group of injured passengers being treated at the marina, the other with the floating boat on fire just 40 metres away.

“You had two separate scenes being managed simultaneously. People were starting to take charge of the situation here with the patients, keeping the public away and managing that situation,” he said.

One eyewitness said it was a “horrific scene”.

Immediately after the accident, the four critically injured people on board were rushed to Royal North Shore Hospital under police escort. Another two patients were transferred to Westmead Hospital in a serious condition, while the remaining two others were treated at the scene.

“NSW Ambulance along with other emergency services established a triage area to assess all of our patients,” NSW Ambulance inspector David Morris said in a statement on Sunday evening.

“Once the area was established, patients were reassessed by NSW Ambulance medical teams.

Fire and Rescue NSW said firefighters were tasked with driving ambulances to allow paramedics to treat patients in transit because of the seriousness of their injuries.

The vessel has sunk in shallow water with a slow fuel leak, with hazardous materials experts called in to contain it.

The cause of the fire is under investigation.

One person remains in critical condition after boat explosion