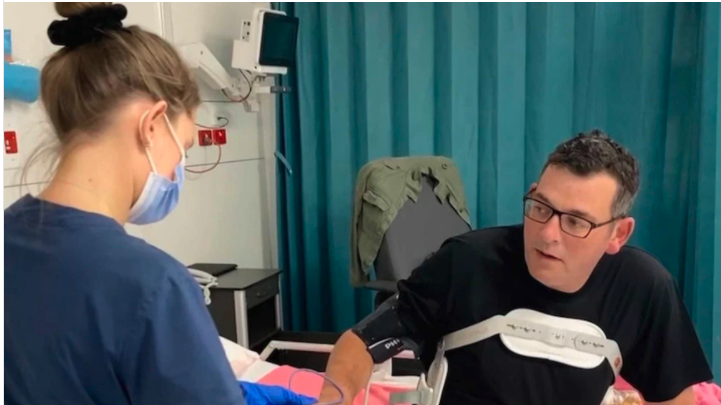 Mr Andrews posted a photo of himself in hospital when he was moved out of intensive care. Photo: ABC/Twitter

Victoria’s Premier Daniel Andrews said he was back walking for 18 minutes a day during a “pretty painful” recovery from a back injury suffered in March.

Mr Andrews broke five ribs and fractured his T7 vertebra when he slipped and fell on stairs at a holiday home on the Mornington Peninsula on March 9.

In a series of social media posts on Sunday night, Mr Andrews thanked the public for messages of support and shared an update on his recovery.

Mr Andrews described the past couple of weeks as “pretty painful” but said he was making steady progress and being diligent with his physio exercises.

Mr Andrews said he had built his daily walking up to 18 minutes.

The Premier is expected to be off work for at least six weeks.

He said he narrowly avoided permanent spinal damage in the heavy fall on slippery wooden steps.

He is wearing a spinal brace during his recovery.