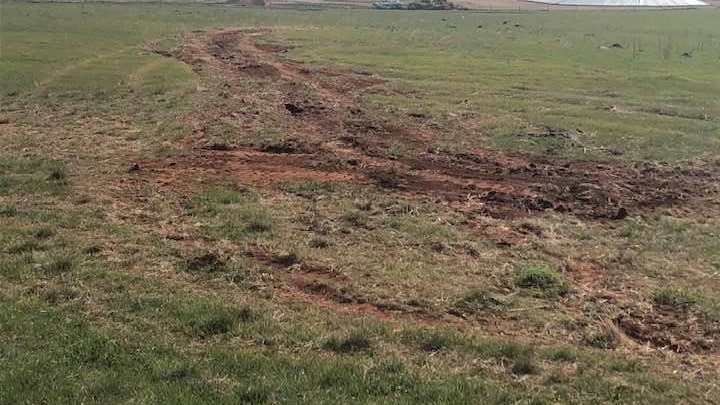 Traditional owners say the partial destruction of an Aboriginal stone arrangement shaped like an eel in western Victoria over the past week has left them traumatised.

The 176-metre structure at Lake Bolac curves across the landscape and is believed to have been created more than 1500 years ago.

The landmark, which sits on private land, is registered with Aboriginal Victoria and known as the Kuyang Stone Arrangement.

The Eastern Maar Aboriginal Corporation is the Registered Aboriginal Party for the area and the organisation’s cultural heritage manager John Clarke said an inspection of the arrangement from the fence on Monday showed up to 60 metres of the stones had been removed to make way for a path.

“It’s traumatic to see such a beautiful and important place in the state it is in,” he said.

“It’s heartbreaking, to say the least.”

Eastern Maar has alerted Aboriginal Victoria to the damage and the organisation has launched an investigation.

An Aboriginal Victoria spokesperson said the organisation was aware of “allegations of harm” to the site in south-west Victoria.

A team will visit the site,  described as a “highly significant Aboriginal place”, on Tuesday.

“We are working with … Eastern Maar Aboriginal Corporation to investigate these allegations,” the spokesperson said.

“It is an offence to cause harm to Aboriginal cultural heritage under the Aboriginal Heritage Act and substantial penalties can apply.”

Mr Clarke said the stone arrangement at Lake Bolac had been a major gathering place prior to European colonisation.

“Different language groups and different nations would come into this space to celebrate the life cycle of eels,” he said.

“Such is the cultural importance of the eel, it was the basis of our aquaculture industry.

“In many ways it made up the cultural identity of who we were as people.”

The volcanic plains of western Victoria are also home to the oldest aquaculture system in the world, with a series of stone-lined channels and pools in the Budj Bim Cultural Landscape established to harvest eels.

Well-known musician and Lake Bolac resident Neil Murray raised the alarm about the partial destruction of the arrangement in the town after noticing the changes on Sunday.

He said the southern arc of the eel was completely gone.

“In the distance you can just see in the corner of the paddock that’s where the stones have been dumped in the paddock.”

Mr Murray said he was “gutted”.

“Aboriginal or non-Aboriginal, if you love this country in a deep way, it’s automatic you have reverence and respect for the Indigenous heritage of this land.”

Part of the eel arrangement was removed to make way for the Glenelg Highway decades ago.

Mr Murray said he hoped the stone arrangement could be restored.

“I just hope some good can somehow come out of this,” he said.

“I hope it can bring the community together.”

A member of the family that owns the property where the stones were moved said the land had been in his family for 120 years.

He said he knew some relatives had been doing work on the property,  but wasn’t sure what they had moved and whether or not they had been aware of the stones being part of an Aboriginal site.