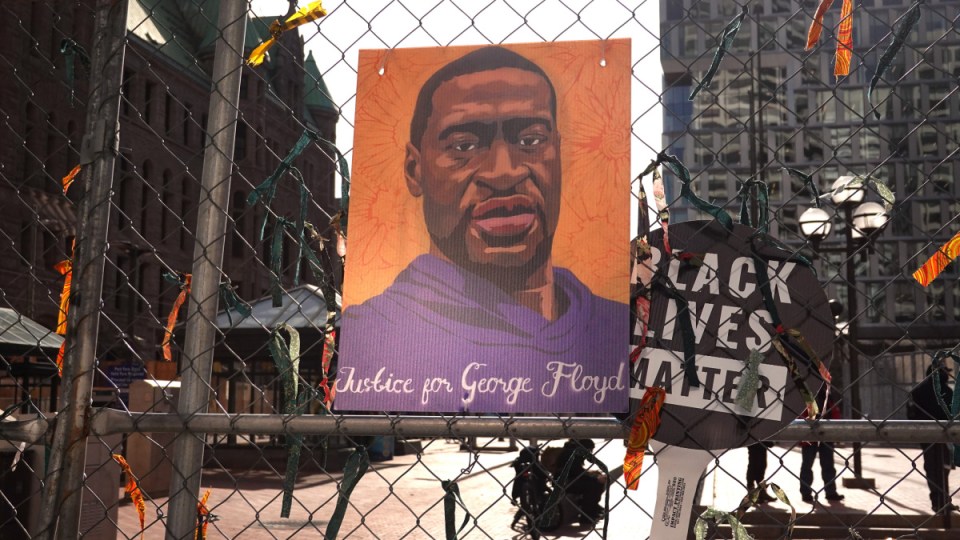 The teenager who filmed George Floyd’s final moments has testified that she began recording because she saw he had been “suffering” under the weight of a white police officer.

Darnella Frazier, 18, said she is filled with regret for not intervening when she saw sacked Minneapolis police officer Derek Chauvin kneel on the 46-year-old black man’s neck for more than nine minutes.

“It’s been nights I stayed up apologising and apologising to George Floyd for not doing more and not physically interacting and not saving his life,” she told jurors on Wednesday morning (Australian time).

Ms Frazier had been walking to a local shop with her nine-year-old cousin when she came upon the three officers.

She said she sent the girl into the shop because she didn’t want her to see “a man terrified, scared, begging for his life”.

“It wasn’t right, he was suffering, he was in pain,” Ms Frazier said.

In an off-camera testimony, the nine-year-old said she was “sad and kind of mad” when she saw Mr Chauvin press his knee against Mr Floyd’s neck.

“It felt like he was stopping his breathing, and it was kind of, like, hurting him,” she said.

Another onlooker, Donald Williams, who shouted at Mr Chauvin to get off Mr Floyd, said he believed he “witnessed a murder”.

The former wrestler who is trained in mixed martial arts including chokeholds, said he watched Mr Floyd “slowly fade away… like a fish in a bag”.

“You could see that he was going through tremendous pain and you can see it in his face from the grunting,” he said.

Prosecutor Matthew Frank played back Mr Williams’ 911 call, on which he is heard telling the dispatcher that Mr Chauvin has kept his knee on Mr Floyd’s neck despite warnings that his life was in danger.

She offers to switch him to a sergeant.

As he is being switched, Mr Williams can he heard yelling at the officers, “Y’all is murderers, bro!”

During cross-examination on Tuesday, Mr Chauvin’s lawyer Eric Nelson sought to show that Mr Chauvin and his fellow officers found themselves in an increasingly tense and distracting situation, with the crowd of onlookers getting agitated over Mr Floyd’s treatment.

Mr Nelson pointed out that Mr Williams seemed to grow increasingly angry at police on the scene, swearing at and taunting Mr Chauvin with “tough guy,” “bum” and other names, then calling Mr Chauvin expletives, which the defence lawyer repeated in court.

Mr Williams initially admitted he was getting angrier but then backtracked and said he was controlled and professional and was pleading for Mr Floyd’s life but wasn’t being heard.

Mr Williams said he was stepping on and off the curb, and at one point, Officer Tou Thao, who was controlling the crowd, put his hand on Mr Williams’ chest.

Mr Williams admitted under questioning that he told Mr Thao he would beat the officers if Mr Thao touched him again.

He told them the number to remember was nine minutes, 29 seconds – the amount of time Chauvin had Mr Floyd pinned to the footpath “until the very life was squeezed out of him”.

Mr Nelson countered by arguing: “Derek Chauvin did exactly what he had been trained to do over his 19-year career.”

The defence lawyer also disputed that Mr Chauvin was to blame for Mr Floyd’s death, as prosecutors contend.

He said Mr Floyd’s drug use, combined with his heart disease, high blood pressure and the adrenaline flowing through his body, caused a heart rhythm disturbance.

“The evidence is far greater than nine minutes and 29 seconds,” Mr Nelson said.