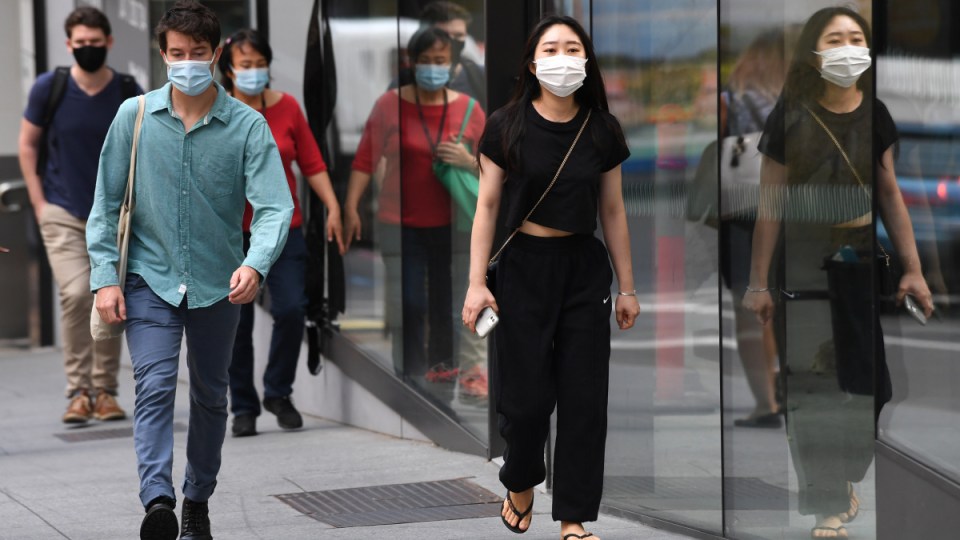 Further south, NSW Premier Gladys Berejiklian is bracing for COVID-19 cases to emerge in northern NSW after urging people to ditch plans to holiday in Queensland this Easter. Photo: AAP

Queensland has 10 new COVID-19 cases, including six locally acquired cases, two in the community that are under investigation and a further two in hotel quarantine.

The first is related to a doctor at the Princess Alexandra Hospital while the second has been traced back to a nurse who worked in the COVID ward at the same hospital.

Both clusters are the highly contagious British variant of the coronavirus.

Dozens of exposure sites have been listed on the Queensland Health Department website shopping precincts in Gladstone.

NSW Health has also expanded its list of exposure sites in Byron Bay after the nurse, and her sister – who also has the virus – spent the weekend in the northern NSW town for a hen’s party.

Tuesday’s expansion of the outbreak came as more than 2.5 million people in greater Brisbane woke to their first day of a lockdown. They are working from home, schools are shut, masks are mandatory and people can leave home only for one of four reasons – grocery shopping, medical appointments, exercise and essential service jobs.

Premier Annastacia Palaszczuk said “the good news is that these cases are linked”.

“We now believe that there are two distinct clusters. We have a cluster linked, of course, to that PA doctor … and we have a second cluster linked to the PA nurse,” she said.

“We are keeping our fingers crossed that this current outbreak can be contained in the three days, which will allow people to go ahead and enjoy their Easter plans.

“We needed a sharp, hard lockdown. We need to do this because this is the highly infectious strain.”

Brisbane’s snap lockdown arrangements will be reviewed on Wednesday night.

NSW had no new coronavirus cases on Tuesday, but Premier Gladys Berejiklian said she expected some after the women’s visit to Byron Bay.

“We hope that we do not have any cases arise in NSW but I would not be surprised if we did, so we must brace ourselves,” she said.

The state’s borders are still open but “if cases are identified in NSW, we will have to respond. I’m hoping it doesn’t come to that”, Ms Berejiklian said.

She also urged people in NSW to “please change your plans” if they intended to travel to anywhere in Queensland for the Easter break, warning there was a chance they could end up trapped in a lockdown.

And 166 people who visited The Farm last Sunday have also been contacted and asked to test and isolate.

Among them were the PA Hospital nurse’s sister, a Stafford man and his brother, and a Strathpine man who is friends with the Stafford man.

Two colleagues of the Strathpine man have also tested positive.

The nurse was not vaccinated when she worked one shift in the PA Hospital’s COVID-19 ward. The doctor who was also infected before being vaccinated.

Ms Palaszczuk said that was “unfortunate” as 7000 Queenslanders had been fully vaccinated and 41,000 had received their first dose.

She has blamed the outbreak on the surge in active cases in state hospitals in recent weeks.

“It’s been a huge increase in workload and the number of people who are positive with COVID that are currently in our hospitals is a large number,” she said.

As concerns grow about the vulnerability of front-line workers to infection with the virus, Dr Young will order all mandatory vaccination of anyone working directly with COVID-19 patients in public hospitals.

Taking that path would halve the state’s health workforce, she said.

“That is not safe, that is not sensible, you can’t do that, no state’s doing that,” Ms D’Ath said on March 15.

Those schools have closed until next week.

Amid criticism of the slow rollout of the national vaccination program, Australia’s chief nursing and midwifery officer, Alison McMillan, said Queensland Health was working hard to get the jab to healthcare workers as quickly as possible.

But she conceded it could take several more weeks.

The Morrison government wants everyone who wants to have the vaccine to receive their first dose by October – a target that is far short of initial promises.

Vulnerable people in aged care are another national concern. Professor McMillan said supply had increased and 89,000 had been vaccinated.

“There is a large population of aged care residents,” she said.

“We’ll continue to see more and more done in the coming weeks, particularly now that we’ve got the domestic supply as well of the vaccine rollout both to aged care residents and aged care staff.”