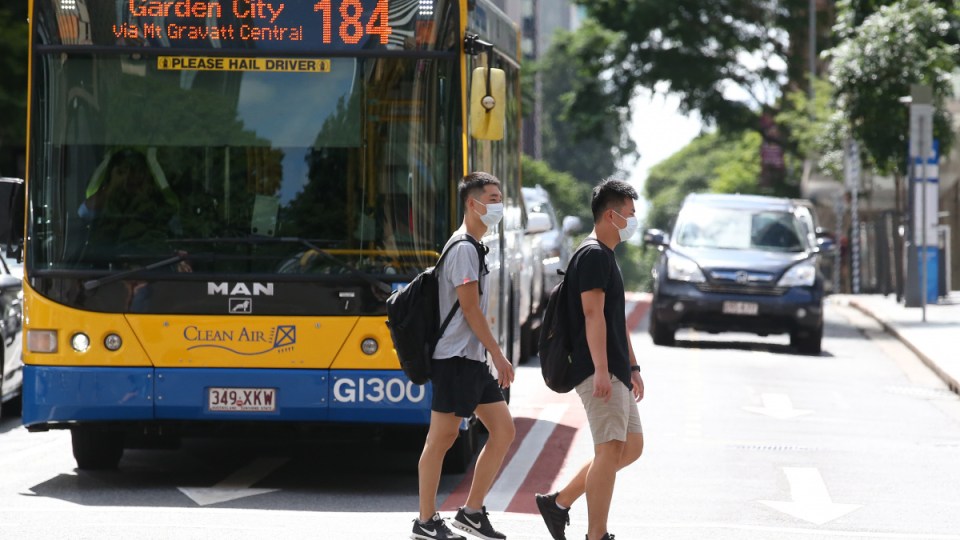 Queenslanders breath a sigh of relief after another day of no locally-acquired COVID-19 cases. Photo: Getty

Queensland authorities have refused to rule out extending the snap lockdown in greater Brisbane to take in the Easter long weekend.

State health authorities announced 10 new COVID-19 cases on Tuesday – including eight in the community – prompting Premier Annastacia Palaszczuk to concede the coming days were “critical” to contain the spread of the outbreak.

“The next few days is critical for our contact tracers to get on top of this,” she said.

“In terms of the greater Brisbane region, we just have to take this day by day.

“We will give the most up-to-date information we can every single morning. Do we expect to see more cases? Probably.

“The big question will be whether or not we see unlinked community transmission.”

“This virus has not gone away – it is circulating we know in the Brisbane area,” he said.

“We will be watching very carefully what happens in Brisbane over the coming days, and indeed in northern NSW, where we know that some of those cases were last weekend while infectious.”

Five local government areas in the greater Brisbane area, covering nearly 2.5 million people, were locked down at 5pm on Monday after seven locally acquired COVID-19 cases were confirmed. The shutdown is not due to end until at least Thursday afternoon.

Queensland authorities said on Tuesday they were dealing with two clusters, both linked to the Princess Alexandra Hospital in Brisbane. They have been traced to unvaccinated front-line workers – a doctor and a nurse – on COVID wards.

NSW Premier Gladys Berejiklian expects the cases to cross the border into her state. Infected people – including the nurse at the centre of one cluster and a Gold Coast tradie who moonlights as an “entertainer” at hen’s parties – have been traced to venues in Byron Bay.

“We need to brace ourselves,” Ms Berejiklian said.

NSW had no new community infections on Tuesday, despite exposure to the coronavirus at a party in Byron Bay.

Two workers at a Gold Coast aged-care home were in isolation on Tuesday after the infected tradesman worked at their facility on Monday. He reportedly had no direct contact with residents.

There are also concerns for Toowoomba, after a group of people from the city travelled to an exposure site in Brisbane before returning west.

Toowoomba Mayor Paul Antonio said he had been briefed by Ms Palaszczuk and relevant authorities.

“I think there may have been some people from here who might have been at a particular venue in Byron Bay,” he said.

“I’m concerned about it, but the reality is that this has been handled particularly well, in my view, by federal and state governments.”

Queensland chief health officer Jeannette Young has said there are no positive diagnoses among the group yet. But the situation is being monitored.

The Northern Territory has declared Toowoomba a hotspot for interstate travel.

Dr Young also said on Tuesday there were reports of a positive COVID case in Hervey Bay, north of Brisbane. It was yet to be confirmed.

“There’s a case in the Hervey Bay area that we’re just looking at, at the moment,” she said.

“There may or may not be an issue there, but we’re looking at it … So essentially, the message here is that people should be on alert no matter where they are in Queensland.”

From Wednesday, unvaccinated medical staff will no longer be able to treat COVID-19 patients in Queensland.

State Health Minister Yvette D’Ath said the aim had been to vaccinate 20,000 staff by mid-April, a goal Queensland achieved last week. Another 6000 were vaccinated on Monday as vaccine deliveries to the state increased.

But she warned vaccinations were yet to reach “critical mass” in Queensland – or the rest of Australia.

“The fact is we’re not fully vaccinated. COVID is real, it’s here and it’s on our doorstep,” she said.

Australia’s chief nursing and midwifery officer, Alison McMillan, said Queensland Health was working hard to get the jab to healthcare workers as quickly as possible.

But she conceded the task could take several more weeks.

The Morrison government is aiming for everyone who wants to have the vaccine to receive their first dose by October, far short of initial targets of four million by early April.

Tasmania, Western Australia, South Australia, Victoria, the ACT and Northern Territory have moved in a variety of ways to restrict or outright ban incoming travel from Brisbane, or the state, over the growing cluster.

The NSW border remains open. But Ms Berejiklian has asked residents eyeing a trip north over Easter to change their plans.

The Brisbane outbreak is also a double blow for non-essential hospitality and tourism companies in Queensland ordered to close just a day after the federal government’s JobKeeper wage subsidy scheme ended.

“It does make you wonder when the government says that we’re ‘not in a race’ for vaccination,” Labor MP Andrew Leigh said.

He said Australia remained about 90th in the world in vaccine rollouts per capita, with a third of Queensland businesses are close to hitting the wall.