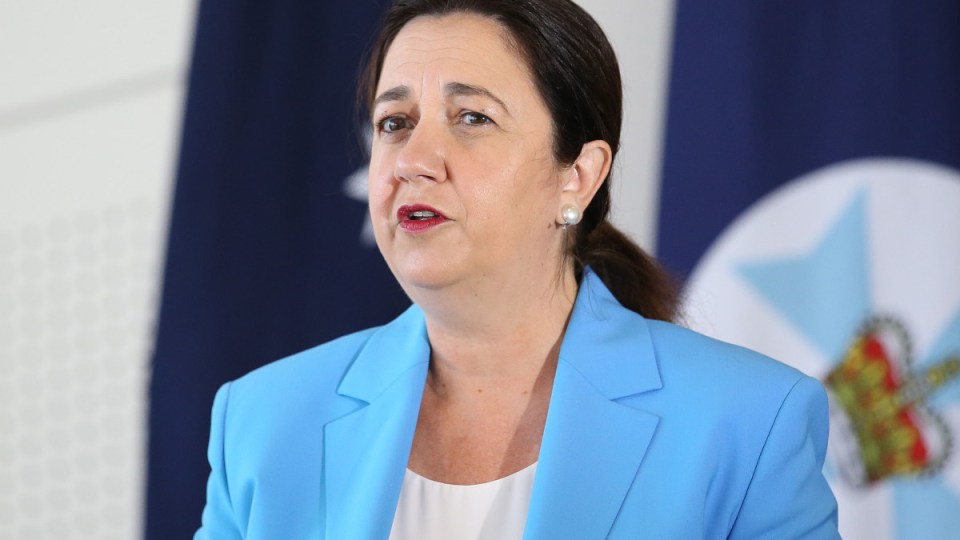 Premier Annastacia Palaszczuk says lockdowns a ‘way of life’ until everyone is vaccinated. Photo: AAP

Three of the new cases are close contacts of existing or historical cases, but the infected persons have been out in the community for several days, raising the risk of more transmission.

It came after Queensland Health confirmed four new local cases of the highly infectious British variant of the virus.

The remaining new cases on Monday were in returned overseas travellers.

The lockdown will last at least three days, ahead of the Easter holiday break this weekend. It will be reviewed on Wednesday night.

“I know in is a really big call. I know it is really tough. We have Easter coming up, we have school holidays coming up but let’s do it now and let’s do it right and let’s see if we can come through it at the other end.”

The ‘hotspot‘ declaration means mask-wearing will be mandatory across Queensland, schools will close and people can leave home only for one of four reasons: Medical, food shopping, exercise and essential work.

“I am very worried. We have to act swiftly. We have done that before and that’s exactly why we are doing it again,” Ms Palaszczuk said.

“I apologise for the inconvenience that it is going to cause people but health has to come first here and I think the public would be unforgiving if it was out of control and we had not taken these measures.”

Monday’s lockdown announcement came just 10 days after chief health officer Dr Jeannette Young promised no more lockdowns for Brisbane. At the end of a three-day lockdown earlier in March – prompted by the infection of a doctor at Princess Alexandra Hospital – Dr Young said 12 months of practice throughout the pandemic meant people knew how to behave to avoid the need for lockdowns.

On Monday, she said the latest shutdown was prompted because there was “significant community transmission” of the virus across Brisbane.

Two of the infected people visited Byron Bay in recent days, prompting fears people in the northern NSW town have also been exposed.

Another of the new infections is in a person who travelled to Gladstone.

Two of the latest infections are in known contacts of previous cases and two under investigation.

One of those is a nurse in a COVID ward at the Princess Alexandra Hospital, although Dr Young said the source of the woman’s infection is yet to be confirmed. That is the hospital where the doctor tested positive earlier in March.

Ms Palaszczuk said this week’s lockdown would enable health authorities to get on top of the contact tracing.

“This is a huge job now that we have to do because we’ve got more of this community transmission,” she said.

“We’ve done this before, and we’ve got through it over those three days in the past, and if everyone does the right thing I’m sure that we will be able to get through it again.”

The Premier urged Brisbane residents not to leave the city ahead of the 5pm start of the lockdown. She also urged people not to descend on supermarkets – a scene that has become common after snap lockdown announcements across Australia.

“The supermarkets, the shops are full of supplies and you will still be able to go out and get food as part of this lockdown,” Ms Palaszczuk said.

“Pease don’t go out and panic buy today. The food shops will operate as per usual.”

Earlier, Ms Palaszczuk had apologised after Queensland Health issued a statement saying one of the two men with COVID-19 had thrown a party for up to 25 people.

Authorities backtracked on information released on Saturday, claiming the man hosted a Strathpine house party despite being told to isolate after being tested.

Ms Palaszczuk said Queensland Health would triple check facts in future, but in this case it had beenthene better to be overcautious.

“If that fact had been proven and there had been a party of 25, it would have been a real concern, and there were actual talks about further restrictions because of that,” she said.