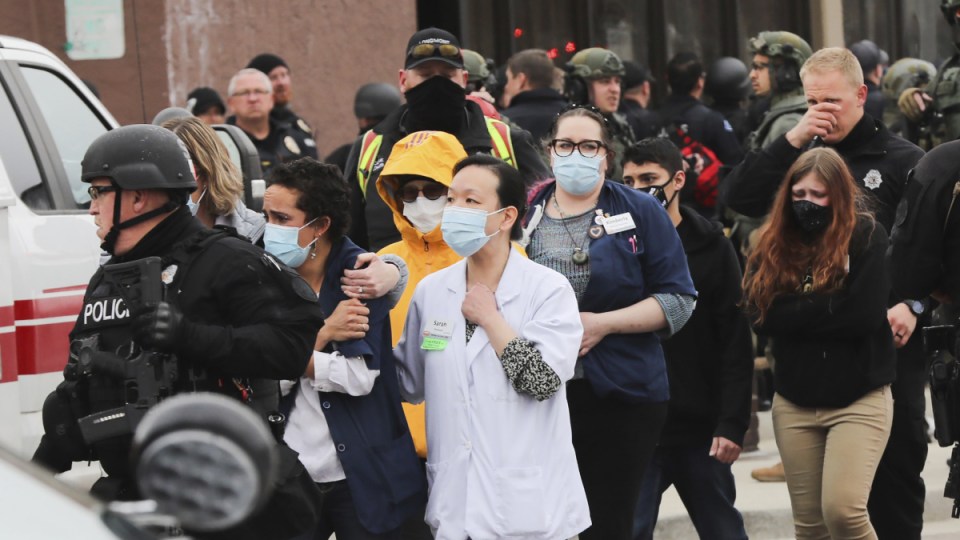 King Soopers staff comfort each other after a shooting at the grocery store in Boulder, Colorado.

Ten people including a police officer are dead and a suspect is in custody after a mass shooting at a grocery store in Colorado.

It is the second deadly US mass shooting in less than a week.

Police gave few immediate details of the shooting and no known motive for the violence, which unfolded at about 3pm local time at a King Soopers grocery store in Boulder, a north-central Colorado city at the eastern foot of the Rockies, about 45 km northwest of Denver.

Frantic shoppers and employees fled for cover through the supermarket as law enforcement officers swarmed the scene, located near the University of Colorado’s flagship campus.

Sarah Moonshadow, 42, a customer and Boulder resident who was in the store with her son, Nicholas, recounted scenes of pandemonium as gunfire rang out from inside the store.

“We were at the checkout, and shots just started going off,” Ms Moonshadow told Reuters.

“And I said, ‘Nicholas get down.’ And Nicholas ducked. And we just started listening and there, just repetitive shots … and I just said, ‘Nicholas, run’.”

Ms Moonshadow said she tried to go to the aide of a victim she saw lying on the footpath just outside the store, but her son pulled her away, telling her, ‘We have to go.'”

The woman broke down in sobs, adding: “I couldn’t help anybody.”

The bloodshed came less than a week after gun violence last Tuesday that left eight people dead, including six Asian women, at three day spas in and around Atlanta. A 21-year-old man has been charged with those killings.

He was the first to arrive on scene and had been with Boulder Police Department since 2010.

One suspect is in custody and a motive is not yet clear.

CNN reported the suspect was carrying a “patrol rifle”, possibly an AR-15-style rifle.

The suspect was getting medical treatment and there was no further threat to the public, authorities said.

Officers had escorted a shirtless man with blood running down his leg out of the store in handcuffs but authorities would not say if he was the suspect.

“This is a tragedy and a nightmare for Boulder County, and in response, we have co-operation and assistance from local, state and federal authorities,” Mr Dougherty said.

A local who had just left the store, Dean Schiller, said he heard gunshots and saw three people lying face down, two in the parking lot and one near the doorway.

He said he “couldn’t tell if they were breathing”.

Video posted on YouTube showed one person on the floor inside the King Soopers store and two more outside on the ground but the extent of their injuries wasn’t clear.

What sounds like two gunshots are also heard at the beginning of the video.

In the excerpt, Schiller is heard calling out saying that people need to call 911: “We don’t know if there’s a shooter, active shooter somewhere,” Schiller says in the video.

“Oh, my God,” Schiller is heard saying. “Guys, we got people down inside Kings Soopers.”

One person was taken from the shooting scene to Foothills Hospital in Boulder, said Rich Sheehan, spokesman for Boulder Community Health, which operates the hospital.

Law enforcement vehicles and officers massed outside the store, including SWAT teams, and at least three helicopters landed on the roof. Some windows at the front of the store were broken.

The FBI said it’s helping in the investigation at the request of Boulder police.

Death toll rises to 10 in US supermarket shooting