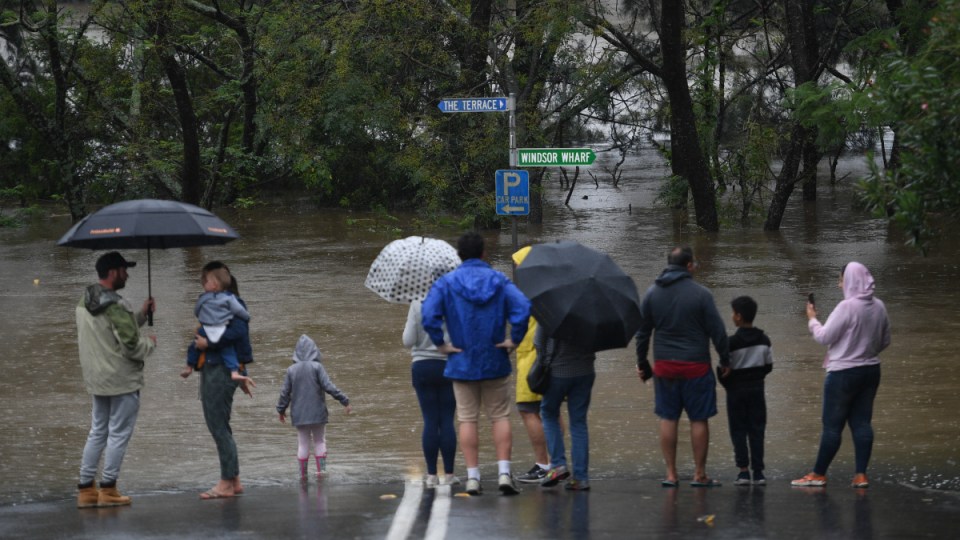 Parts of Sydney’s north-west are experiencing major flooding, with further evacuation orders issued for some areas.

Residents in several suburbs throughout the city’s north-west have been told to prepare to leave by the State Emergency Service, with more than 18,000 having already evacuated across the state’s north and throughout Sydney.

The SES has issued an evacuation order for low-lying properties in North Richmond and Agnes Banks due to rising flood water.

While the SES has also issued a warning for moderate flooding along the Nepean River at Penrith with further rises possible.

⚠MAJOR #FLOOD HAWKESBURY RIVER AT AT NORTH RICHMOND⚠Major flooding is current at North Richmond. Flooding may remain at these levels for much of the week based on forecast rainfall.MORE:https://t.co/BCnxAe6tsR

Major flooding is occurring on parts of the Colo River with the waters expected to continue to rise until Tuesday, while major flooding similar to the 1988 and 1990 flood events is occurring along the Hawkesbury River.

The Bureau of Meteorology is forecasting heavy rainfall to continue through Tuesday.

NSW’s top forecaster says the record floods in many of the state’s towns are the worst he’s seen – and there’s more torrential rain to come.

Homes have been swept away, and thousands evacuated amid relentless rain that has lashed the NSW coast for days.

Some locations have experienced almost a metre of rain in one week, the Bureau of Meteorology says.

“I’ve been a flood forecaster in the bureau for 20 years and this is probably the worst flooding that I’ve experienced and I’ve had to forecast,” flood manager Justin Robinson said.

“We’ve got a flood watch that covers all the way from the Queensland border down to the Victorian border – all those coastal rivers.

“My thoughts really go out to those impacted communities and individuals.”

More rain is on the way too, the BOM warns.

The state’s south coast is due to cop a drenching and will get some of the heaviest falls on Tuesday.

It may have been going for days but unfortunately this situation is far from over. This map shows #Flood Watch & #Warning zones with rain radars overlaid. You can see rain still falling in flood areas, with more forecast for coming days https://t.co/n6uSzt271E@NSWSES @nswpolice pic.twitter.com/oXD9pWq4UI

The trough that has been causing the havoc is due to collide with another system coming in from the south-west.

That means Sydney and the mid north coast could cop another 100 millimetres in the next day or so, and a season’s worth of rain is possible in the west.

A number of towns across the state have been isolated for days, some without fresh water or power.

Roads have been cut off, hundreds of homes inundated and more than 200 schools shut.

The renewed rainfall means the worst is potentially yet to come, Premier Gladys Berejiklian said.

“We’re not through the worst of it potentially and that’s why we need to brace ourselves,” she told reporters.

“We have no illusions about how difficult the next few weeks and months will be.”

Moderate flooding is occurring along the Macleay River at Kempsey and Smithtown where it has peaked, but the bureau predicts further rises on Tuesday.

Major flooding is occurring at Wollombi in the Hunter Valley, while moderate flooding is still plaguing Taree and Gloucester.

Inland, the Macquarie River levels have peaked at Bathurst, with minor flooding continuing.

There has been some good news, with those evacuated from the western part of Jamisontown and Penrith, and the northern end of Mulgoa are among those given the all clear to return home.

The Australian Defence Force will provide two search-and-rescue helicopters operating out of the NSW south coast for 24-hour operations.

“The search-and-rescue choppers will be able to work through night and day and supporting personnel will be made available to make this happen,” federal Emergency Management Minister David Littleproud said.

“Both will have the capability to winch and recover in the dangerous flood areas.”