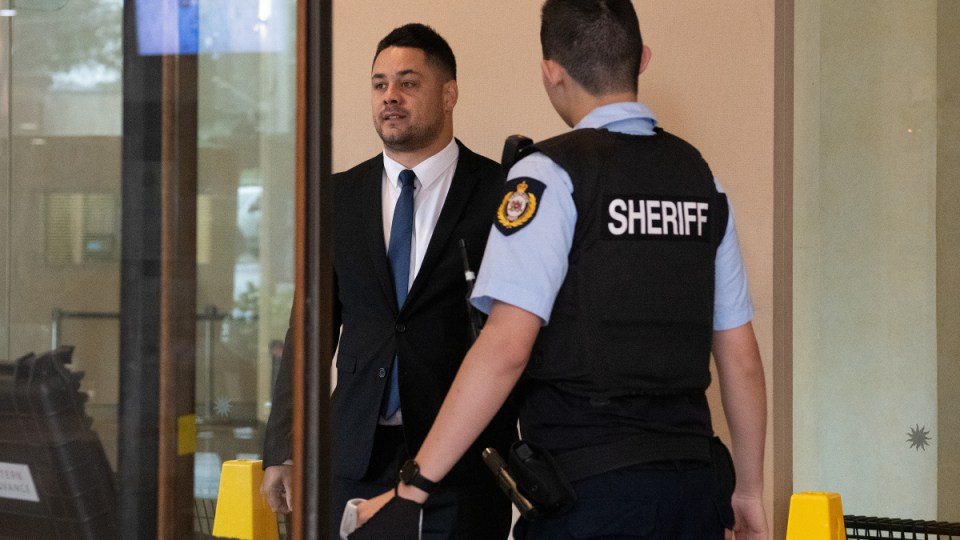 Former NRL player Jarryd Hayne has been found guilty of sexually assaulting a woman on the night of the 2018 NRL grand final.

A retrial in the NSW District Court heard he met the then-26-year-old at her house on the way back to Sydney from a buck’s weekend in Newcastle.

The Crown alleged Hayne sexually assaulted the woman in her bedroom while her mother was also in the house, causing two injuries in the process, before leaving.

But Hayne insisted all sexual activity was consensual and that he was apologetic about the injuries, which were accidental and not inflicted recklessly.

The 33-year-old pleaded not guilty to two counts of aggravated sexual assault.

It took the jury three days to find Hayne guilty of the two alternate counts, which were sexual assault without the circumstances of aggravation by inflicting actual bodily harm.

Hayne has been released on bail on a $50,000 surety and will be sentenced in early May.

He is facing a maximum possible sentence of 14 years’ jail.

The court was told Hayne had negotiated a $550 taxi fare to Sydney and asked the driver to stop at the woman’s house on the way, following increasing contact with her on social media and via text for about two weeks.

The jury heard the former Parramatta Eels player initially sang along to music videos, including an Ed Sheeran version of the Oasis song Wonderwall, in the woman’s bedroom before an interruption from the taxi driver prompted him to go outside.

Crown prosecutor Brian Costello said the woman formed a “conscious and definitive decision” against consent, realising the cab was waiting.

After he watched some of the grand final with the woman’s mother in the lounge room, Hayne returned to the woman’s bedroom.

The jury was told Hayne began trying to kiss her before becoming “rough” and sexually assaulting her, causing two injuries.

After he left, she messaged him that she didn’t want to have sex after realising the taxi was waiting, she was “hurting” and she expected him to stay.

Hayne later stated “unequivocally” that he believed everything that happened in the bedroom was consensual.

Much of the evidence was given by replaying video recordings of a previous trial.

In her recorded evidence, the woman was asked about her intentions and expectations for the visit and said she expected to meet and talk.

“I didn’t really have a plan as to what would have happened, there wasn’t a ‘hey come over, let’s have sex’ plan,” she said.

In a message to a friend after Hayne left, she said Hayne started being “really pushy” and she said no.

Under cross-examination, the complainant became frustrated when Hayne’s former barrister Philip Boulten SC took her through messages she sent prior to the meeting.

“It’s just irrelevant. No means f—ing no,” she said at one point.

He said the woman was kissing him back in the bedroom and, knowing she didn’t want to have sex, he thought he would “please her and that was it”.

Hayne denied intending to hurt the woman and denied she had said “don’t”, “stop”, “no” or words to that effect.

Defence barrister Richard Pontello SC told the jury the woman was attracted to Hayne and was willing to engage in sexual activity, even after being disappointed by the cab.

The woman’s mother recalled her daughter telling her, as Hayne spoke to the taxi driver, that there was “no way” she was having sex and described her as looking “confused” and “upset” after he left.