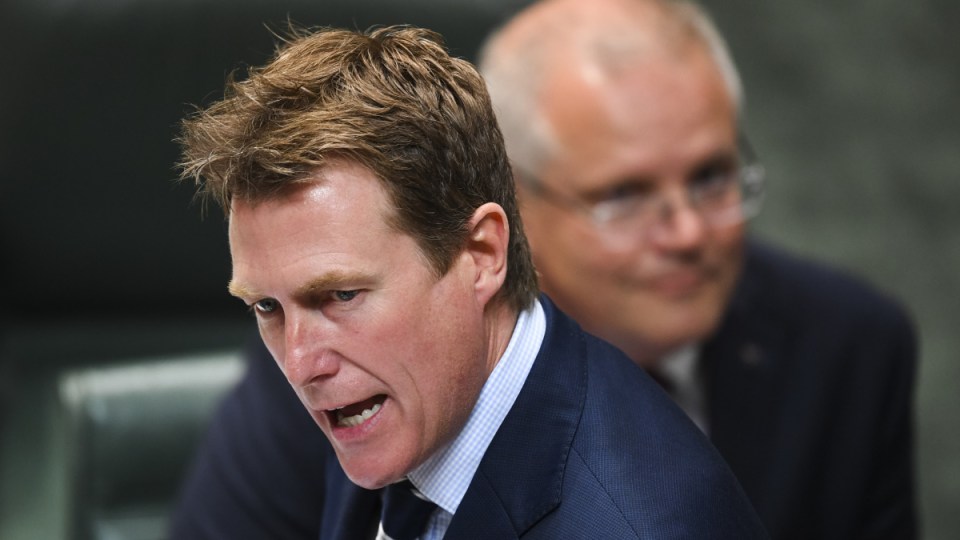 Scott Morrison, right, is seeking legal advice about the handling of Christian Porter.

Scott Morrison has defended his handling of rape allegations against Attorney-General Christian Porter, who is now suing the ABC for defamation.

The Prime Minister is seeking legal advice on what duties Mr Porter may need to relinquish while he pursues the legal action.

But Mr Morrison has refused to seek independent advice on whether the Attorney-General is a fit and proper person to remain in the role.

“They are two separate matters,” he told Parliament on Thursday.

The Prime Minister has also refused to hold an independent investigation into the sexual assault allegations.

“We have sought advice from the Solicitor-General involving these matters,” Mr Morrison said.

“I will await the advice from the solicitor-general and that will inform our decision about how we’ll be able to address these issues.”

The Prime Minister has proposed to delegate some of Mr Porter’s responsibilities relating to the Federal Court and the ABC while the case is afoot.

The first court hearing is due to take place on May 14.

She is also concerned the attorney-general will continue to oversee national consent laws and the establishment of a commonwealth integrity commission.

Mr Morrison has sought independent legal advice to see if there are other parts of the attorney-general’s role he should step back from to prevent a perceived conflict of interest.

Mr Porter is seeking aggravated damages over an ABC story that detailed historical rape allegation against a cabinet minister.

His lawyers allege the story – which did not name Mr Porter – was defamatory because it imputed he raped a 16-year-old girl in 1988 and that contributed to her taking her own
life.

Mr Porter vehemently denies the accusations and identified himself as the subject of the article two weeks ago.

His lawyer said he was forced to go public after a series of news articles, social media posts and interviews made him easily identifiable to many Australians.

The Opposition continues calls for an independent inquiry, which the government rejects.

Mr Porter is due to return to work after mental health leave on March 31.