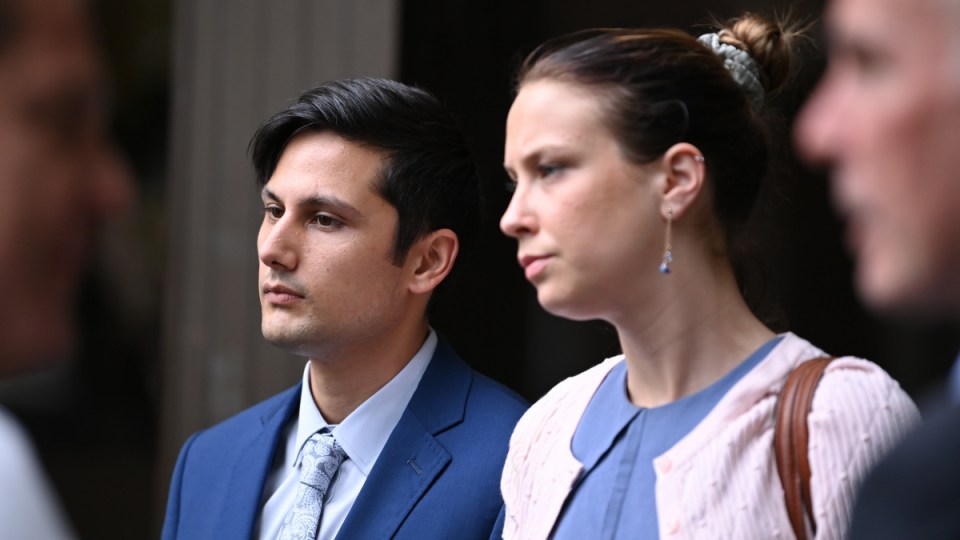 The judge ordered the jury to acquit Hannah Quinn of murder on the basis there was legally no case to answer. Photo: AAP

Sydney actor Blake Davis has been sentenced to five years and three months jail for the samurai sword killing of a man who attacked him during a botched home invasion.

In 2020. the 31-year-old was cleared of murder but found guilty of manslaughter by a jury over the August 2018 death of rapper Jett McKee.

Armed with knuckle dusters and a replica gun, Mr McKee punched Davis and threatened his girlfriend Hannah Quinn in their inner-city granny flat at Forest Lodge.

The court heard Quinn chased Mr McKee down the street after he snatched her bag. When her boyfriend caught up to them, he cracked McKee’s skull with the sword.

“I am left with no doubt that the lives of both the McKee family and the Davis family have been shattered forever as a result of the events that occurred on Hereford Street, Forest Lodge,” she said.

Davis’s eyes welled up as he learned his fate, while Quinn looked on anxiously from the public gallery with relatives.

Justice Adams said the home invasion would have been a “horrifying experience” for anyone, let alone someone with Davis’s anxiety and PTSD.

“I accept Mr Davis is not a man usually prone to violence and reacted to the extraordinary circumstances he was facing,” Justice Adams said.

During the trial the court heard Mr McKee, 30, had toxic-to-lethal levels of the drug ice in his system and targeted the couple because he believed they were dealing drugs.

On Tuesday, Justice Adams rejected Quinn’s claims during a police interview that Mr McKee was pointing his imitation gun at her when Davis swung the sword.

The judge was satisfied Mr McKee “did not pose any immediate threat” to Quinn such as to render the sword strike a reasonable response.

However, she “soundly rejected” the Crown’s case that Davis murdered Mr McKee “in cold blood” to teach others a lesson about robbing drug dealers.

“This is a moderately serious case of manslaughter by excessive self-defence, but nowhere near as high as contented by the Crown,” Justice Adams said.

Last month, McKee’s fiancée Averil Bowers stared down the offenders during a sentencing hearing and condemned them for portraying themselves as victims.

She said they used every tactic at their disposal to vindicate themselves while “villainising” Mr McKee.

Davis has previously apologised for taking a life and said he “died emotionally” on the day.

But he has also insisted his only intention was to save Quinn and admitted he did not accept the jury’s verdict.

Justice Adams accepted Davis was “very remorseful” for the killing and that his mental health had been “profoundly impacted” by his actions.