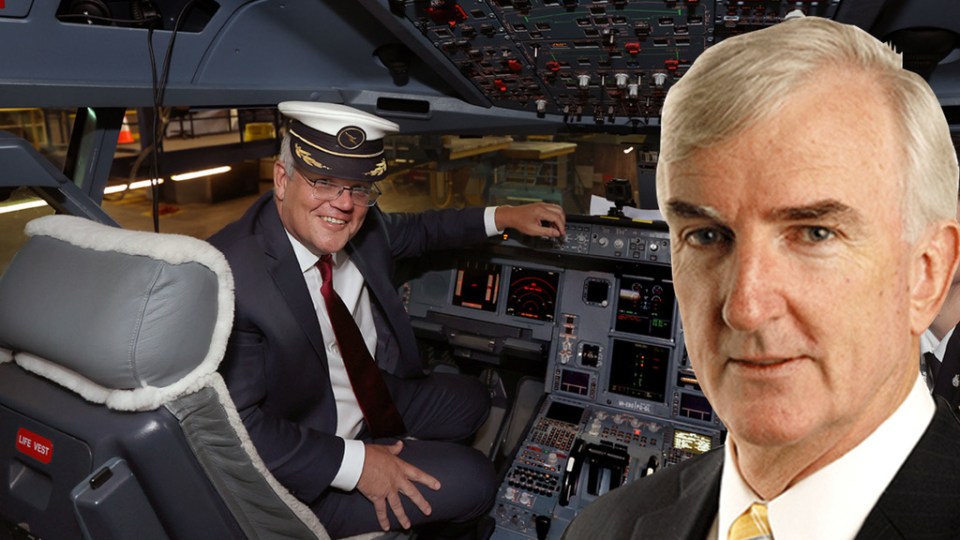 The flight deals are another example of politicking on the public purse and pork barrelling, Michael Pascoe says.

A more accurate rendering would be “Half-price airfares a classic half-arsed Morrison stunt”.

This one has it all – the pre-announcement drop for newspapers dutifully taken at face value, the Scott Morrison photo op in a plane, a bevy of senior politicians trotted out for sundry platitudes, the Prime Minister running away before he could be asked any embarrassing questions, and blanket media coverage.

Too bad the headline act, the old-fashioned paper aeroplane ticket waved about by the Prime Minister, is a poorly researched policy that looks suspiciously like it had been thrown together in a hurry. (See previous mention of avoiding embarrassing questions.)

For example, half-price fares to Broome and Uluru in their peak season? Good luck finding accommodation.

And if you’re the sort of person only lured into going there by a cheap fare, lots and lots of luck finding affordable accommodation.

Ditto tropical Queensland’s dive boat operators – if the potential customers need a half-price ticket to go, they’re not prime prospects for the several hundred dollars required to start your engines.

This has been painted as being all about replacing locked-out foreign tourists with interstate travellers.

You know what is by far the biggest destination for foreign tourists? Sydney. Nothing.

Tasmania gets a look in on a couple of fronts. That’s Tasmania that ran out of hire cars over Christmas, that does nicely as an “overseas” destination for Australians unable to fly over any other seas.

And Victorians need help to fly to the Gold and Sunshine coasts once the winter winds blow? No, they don’t.

Just as Josh Frydenberg listened to a crying Solly Lew about JobKeeper, it looks like Scott Morrison was mainly listening to Qantas CEO Alan Joyce about this package.

It is overwhelmingly about the big business of airlines, not the drivers and owners of tourist coaches, or the crews and owners of charter boats and certainly not what’s left of the travel agency industry.

There’s also a giant fudge being perpetuated about the economic impact of our shutdown of international tourism.

While select pockets of our domestic tourism industry are heavily dependent on foreigners, our tourism ledger overall is arguably richer as long as domestic borders stay open – and all the cheap airfares in the world don’t matter if the borders close again.

In a normal year, more Australians go overseas, go for longer and spend more than the foreigners who come here for a short stay.

What it means though is the opposite of this latest stunt.

Genuine help needs to be targeted, not the scattergun attempt to flood the area.

In 2019, a record 9.5 million foreigners arrived here for a short stay, 47 per cent of them citing “holiday” as their main reason for coming. Also in 2019, 11.3 million Australians came home from a short trip, 57 per cent of them for a holiday, median stay 14 days. We ran a tourism deficit.

The pent-up spending power of those millions of Australians who can’t use their passports is an important part of our current consumption surge.

It’s playing a role in the housing bubble, in the surge in motor vehicle sales, caravan sales through the roof and caravan parks being full, even (anecdotally) a boom in the framing business – instead of skiing in Austria or catching shows on Broadway, we’ve been buying art.

And given the chance of state borders being open plus some confidence that they will remain open, the spare money and our love of travel will have us flying and driving right around this country without the need for half-price airfares.

So it’s the usual question: Was Thursday’s photo op for the hastily conceived, half-arsed half-price airfares stunt a conspiracy or a stuff up?

Given the government’s track record of unprecedented pork barrelling and politicking on the public purse, it is only reasonable to look for signs of both.

The latter is easy – the promised 800,000 subsidised tickets will come with a reminder that they are a present from Scott Morrison and there was room for a little knifing of the WA and Queensland Labor premiers as well.

And you don’t have to sniff too hard for a whiff of pork.

Another part of the package was the re-announcement of the “Recovery for Regional Tourism Program” – part of the “$1 billion COVID-19 Relief and Recovery Fund to support regions, communities and industry sectors disproportionately affected by the economic impacts of COVID-19”.

Applications opened in November and will close in September, a long time to dangle a grant carrot of $50 million.

The eligible regions and the funding they can score have already been decided. The biggest single bite goes to Tasmania ­– $13.5 million, 27 per cent of the total pot for little Tassy, which is actually doing rather well.

Tasmania has been a focal point for Morrison government pork barrelling, whether it has been Peter Dutton flying at great expense to announce a grant that hadn’t been awarded yet, or using the corrupt Community Development Grant scheme to reward the state for swinging  Liberal Party at the last election.

There’s plenty of room for both political conspiracy and stuff-ups in a “Stunt” Morrison photo op – but not for questions about not holding an inquiry.