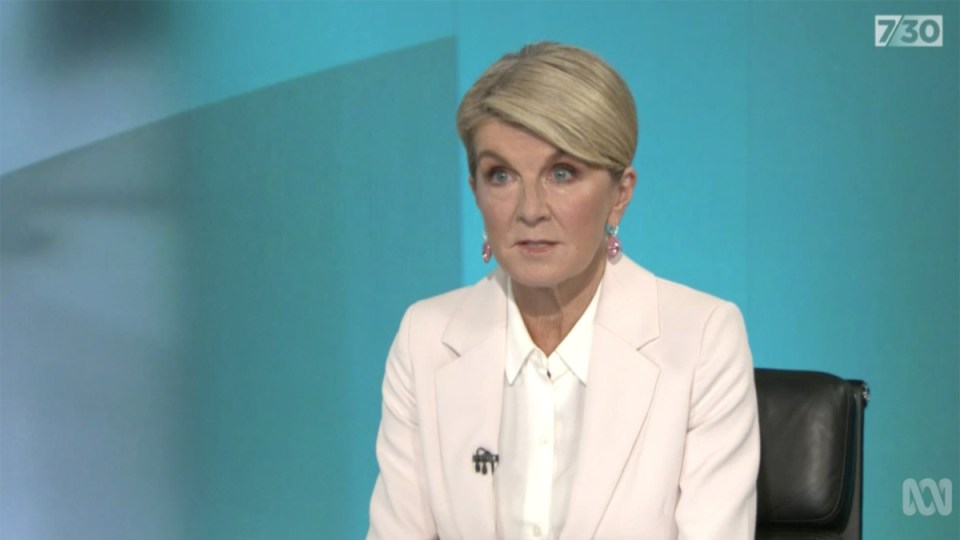 Julie Bishop told 7.30 on Monday night attitudes towards women and the handling of complaints must change. Photo: ABC/7.30

The anonymous letter was sent to a number of politicians, including the Prime Minister’s office. Both men said they had not read it.

Ms Bishop said she was aware the South Australian coroner was considering an inquest into the woman’s death and said that was the “next logical step, if there is to be further scrutiny of this matter”.

.@HonJulieBishop says she was “surprised that no one thought to inform the Prime Minister” about the Brittany Higgins case.

“In my experience, an allegation of that nature … would be brought to the attention of the Prime Minister immediately.” #auspol #abc730 pic.twitter.com/QHVtWLvqql

Ms Bishop said she was also “surprised that no one thought to inform the Prime Minister” about the Brittany Higgins case.

“In my experience, an allegation of that nature, a serious, indictable offence, would be brought to the attention of the Prime Minister immediately.

“It’s the kind of information that prime ministers, in my experience, want to know about.”

“As somebody who has employed many people over many, many years, if someone had come to me with an allegation that a rape occurred, as it turned out in my office, but in the workplace, for which I’m responsible, I would have felt a duty not only to that person, but to others in the workplace to inform the police,” she said.

Ms Bishop told 7.30 the culture in Parliament House needed to change, particularly when it came to attitudes towards women and the handling of complaints.

“If the events of the last few weeks haven’t led political parties to embrace change, I don’t know what has to happen,” she said.

She said that as it was up to Parliament to “make the laws that we impose on workplaces around the country, Parliament House should be the exemplar, the gold standard, the place where people can see how best practice in workplaces should be carried out”.

Ms Bishop said there was a culture within all political parties to ensure that no individual does anything that would damage the party’s image or its reputation, particularly at election time.

“It can mean that a culture develops whereby those who are prone to inappropriate or unprofessional, or even illegal behaviour, get a sense of protection.

“It makes it a very unusual workplace in that regard. But also we don’t have the structures in place to counter that.

“I think we need some basic and fundamental structural change within Parliament – induction programs, proper formalised training programs, and an independent complaints system so that people feel protected and secure if they do make a complaint.”

Former Liberal minister @SharmanStone recently said a group of male politicians who called themselves the 'swinging dicks' sought to block @HonJulieBishop's career aspirations: "If their ambition was to thwart my aspirations, then they failed." #auspol #abc730 pic.twitter.com/ON5zC8xApH

Asked if she was aware of the group, Ms Bishop told 7.30: “I believe it was ‘big swinging dicks’. So there was obviously an overexcited imagination on the part of some, I would suggest.

“Nobody self-identified to me, thank goodness for that. But if they were seeking to block my aspirations, well, they didn’t succeed because my ambition was to be the foreign minister of Australia and I’m very proud to say that I served in that role for five years.

“And likewise I was deputy leader of the party for 11 years. So if their ambition was to thwart my aspirations, then they failed.”