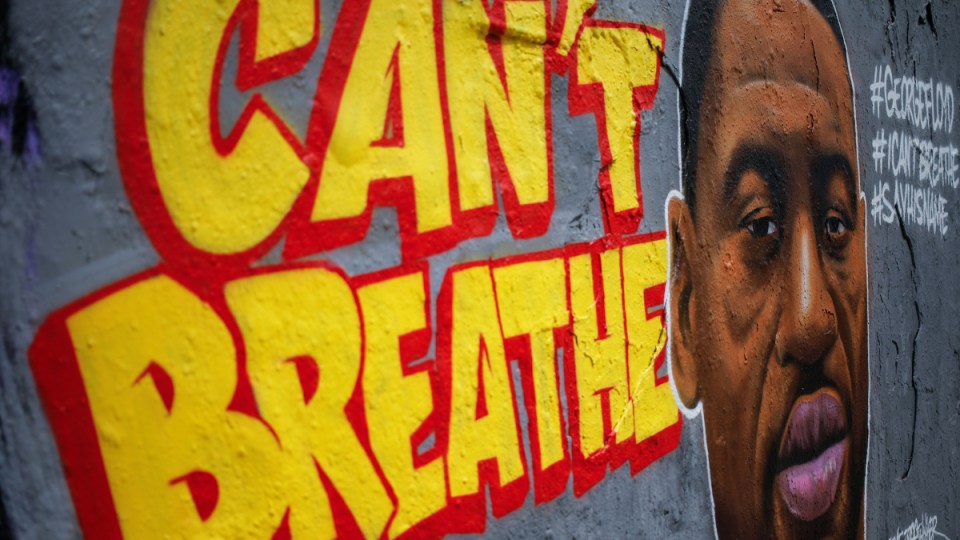 The last words of George Floyd, 'I can't breathe', is also a slogan associated with the anti-racism movement. Photo: Getty

The jury that will decide the guilt or innocence of the ex-Minneapolis police officer accused of killing George Floyd has yet to be selected.

The pool of potential jurors was sent home on Tuesday morning (Australian time) despite Judge Peter Cahill’s rejection of the prosecution’s motion to prevent Derek Chauvin’s trial from proceeding.

That’s until an appeals court has decided on whether to reinstate a third-degree murder charge against Mr Chauvin, who faces second-degree murder and manslaughter charges in the May 2020 death of 46-year-old George Floyd.

The Minnesota Court of Appeals ruled last week that the less severe charge of third-degree murder must be reconsidered.

It had originally been dismissed in 2020 due to a lack of evidence.

State prosecutor Matthew Frank requested that Judge Cahill delay jury selection while a decision on whether to allow the third-degree charge is pending in the state Supreme Court.

“We won’t know exactly what the charges are if we now go forward and start picking the jury,” Mr Frank said.

“This court would be making decisions about jurors for a trial about which we don’t know what the exact charges are going to be yet. And that jeopardy, once it attaches, that clearly cannot happen.”

Judge Cahill initially refused to delay the high-profile case, but a request filed with the Court of Appeals to put the trial on hold was approved.

Jury selection is on hold until at least Wednesday (Australian time).

“The state is fully ready to go to trial, but the trial must be conducted in accordance with the rules and the law,” Minnesota Attorney-General Keith Ellison, whose office is prosecuting Mr Chauvin, said.

“Now that Mr Chauvin has stated his intention to appeal Friday’s Court of Appeals ruling to the Minnesota Supreme Court, as is his right, the district court does not have jurisdiction to conduct jury selection or hear and rule on other substantive matters in the trial. We have filed motion with the Court of Appeals to ensure that justice is pursued properly.”

The case is seen as a referendum on police violence against black Americans.

The judge has set aside three weeks for jury selection alone, mindful of the difficulties finding impartial Minneapolitans in a case that has convulsed a nation and in which an image of the victim – a selfie of Mr Floyd faintly smiling – has fast become an international icon of racial justice.

The court mailed prospective jurors an unusually detailed 16-page questionnaire last year asking them what they know about Mr Floyd’s death on May 25 on the street after his arrest outside a Minneapolis grocery store.

Among the questions: Have they seen video of his death? Recorded on bystanders’ phones and police body-worn cameras, they show Mr Chauvin, who is white, with his knee on Mr Floyd’s neck for nearly nine minutes as Mr Floyd, a 46-year-old black man in handcuffs, pleads for his life before fading into stillness.

Have they taken part in the protests that followed? Video of Mr Floyd’s dying words – “I can’t breathe” – spread online within hours, erupting in one of the largest protest movements seen in the US, with daily marches in cities around the country decrying police brutality and racism.

And what do they think of Black Lives Matter? Mr Chauvin’s lawyers are expected to challenge the seating of jurors who show support for the movement against racism in the justice system.

Mr Chauvin’s lawyers have up to 15 peremptory challenges by which they can exclude a juror without having to cite a reason. The prosecutors from the Minnesota attorney-general’s office have nine.

If one side suspects the other is challenging a juror on the basis of their race, ethnicity or sex, they can ask the judge to overrule.

Some criminal justice experts fear the resulting 12 jurors and four alternates might not include any black people and that this could undermine public perception of the validity of any eventual verdict.