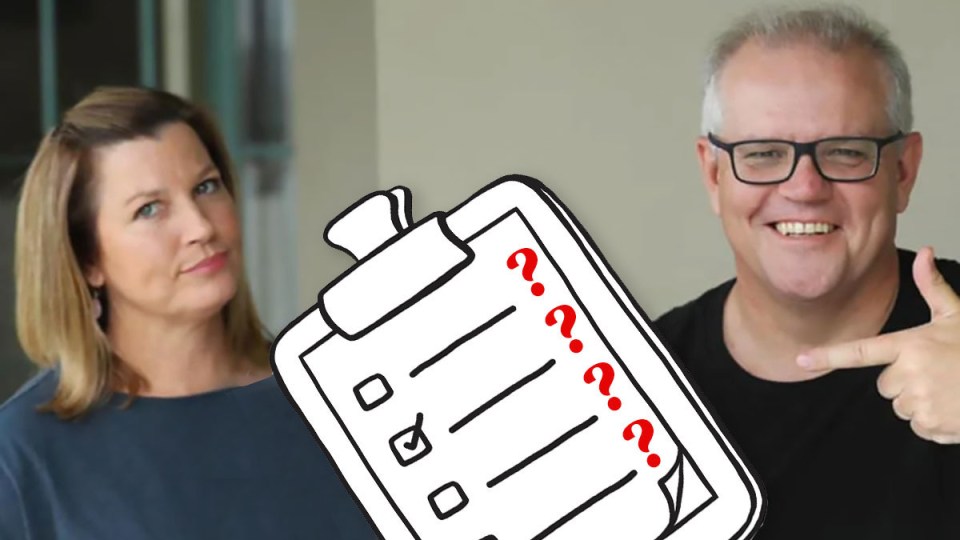 It’s time that Jenny Morrison has a chat with her husband Scott about myriad issues engulfing his government. Photo: TND

Prime Minister Scott Morrison recently put stock on the wisdom of his wife Jenny, taking her advice on how to respond with more empathy over the Brittany Higgins’ revelations.

As the scandal around his government deepens, it might be time for him to seek Jenny’s input on a host of other issues.

Here are 10 questions to discuss over dinner at The Lodge.

Jen, do you think the public really expects me to read everything that crosses my desk?

I mean that dossier on Christian Porter was pretty thick.

Was it a mistake not to open it?

And do you think we can withstand the pressure for an independent inquiry now Christian has taken leave to safeguard his mental health?

Or should I just announce one?

I guess you heard those reports about Defence Minister Linda Reynolds referring to former employee Brittany Higgins as a ‘lying cow’.

Who tells the media this stuff?

Can’t you say what you really think any more?

Now I don’t know whether I should ask Linda to write Brittany a letter apologising, or just ignore it?

What do you think I should do about ADF chief Angus Campbell?

He’s never wanted to hog the limelight before, but he certainly gave it his best shot this week.

I mean, he’s telling young women not to be attractive?

What happens Jenny, when someone asks me whether I think young women should be attractive?

Jen, these claims by school girls of being sexually assaulted keep growing. There are hundreds now.

Has there been any correspondence from our girls’ school?

Or do you mind having a chat to them about it? Ours aren’t going out to parties yet, are they?

Should I offer Grace Tame a job?

I mean I made her Australian of the Year, but I’m wondering whether it might help us to have her on the team.

She seems to have very strong opinions, though.

Do you think having kids gives you a conscience?

I liked when we were talking about COVID every day.

I had a handle on that, but Dan Andrews and Annastacia Palaszczuk are stealing all the media on that one.

I’m thinking we need a new announcement on COVID. Got any ideas, Jen?

This aged-care report will resurface when these sex accusations die down.

I’ve said we’ll throw money at it, but that doesn’t seem to be enough for some people. Some of the recommendations are contradictory, too.

Which ones do I accept?

Do I know anyone in aged care? I thought it might make a nice picture opportunity …

I heard it was International Women’s Day some time next week and women are retiring with only three-quarters as much superannuation as their husbands.

How does that work?

Why are people worried about the budget balance?

They don’t seem to understand, Jen, that we can just print more money.

Isn’t that why we’re in government?

We need a catchy slogan that covers climate change and reconciliation.

My political smarts tell me they are still issues, Jen. Got any ideas?

That not-so-secret trip to Hawaii, cut short by the bushfires, seems like a decade ago.

When do you think it would be safe to do it again?