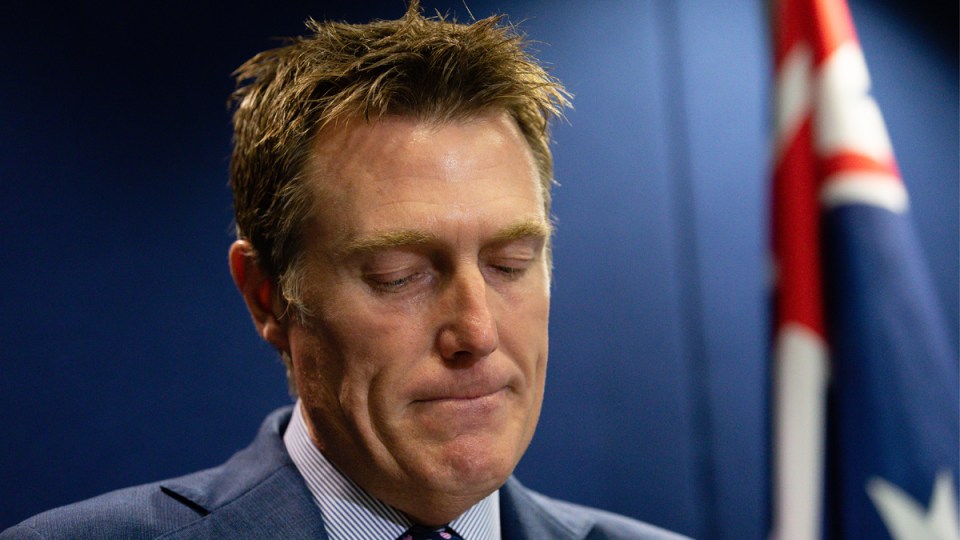 Mr Porter publicly outed himself as the subject of the allegations in the ABC's report – which he denies. Photo: AAP

The family of a woman who alleged Attorney-General Christian Porter raped her in 1988 wants an inquiry into her death.

It comes as the South Australian coroner mulled ordering an inquest but NSW Police stood by their decision not to interview Mr Porter during their inquiries into the allegations.

Police said on Thursday it would have harmed “future investigative strategies” if they had spoken to Mr Porter before getting a formal statement from the alleged victim.

The woman – who was a teenager at the time of the alleged incident – died in June 2020, without providing an official statement to officers. On Thursday, NSW Police revealed she had told them just two days before her death that she did not want to proceed with the complaint.

The woman’s death in Adelaide, which had been ruled a suicide by South Australia Police, is the subject of further police investigations at the request of the state coroner, and may be further probed by a coronial inquest.

On Thursday afternoon, the woman’s family said they “continue to experience considerable grief arising from their loss”.

“They are supportive of any inquiry which would potentially shed light on the circumstances surrounding the deceased’s passing,” according to a brief statement on behalf of the family, first reported by news.com.au.

“They ask that their privacy be respected during this difficult time.”

Prime Minister Scott Morrison has seemingly ruled out agreeing to such an inquiry, saying there was “not another process” for him to entertain.

Michael Bradley of Marque Lawyers, which represented the woman while she was alive, suggested an independent process helmed by a retired judge.

NSW Police said on Tuesday they had closed their investigation into the alleged rape because there was “insufficient admissible evidence to proceed” with a criminal probe.

The SA coroner, however, said an investigation into the woman’s death continued, and that a coronial inquest remained possible.

“While [South Australia Police] has provided information to me, I have determined that the investigation is incomplete. This was particularly evident having regard to information contained in recent media reports,” state coroner David Whittle said.

Mr Whittle said an investigation file on the woman’s death had been delivered to him by police only on Monday.

The other fresh development in the sprawling questions surrounding the Attorney-General comes from NSW Police.

On Wednesday, in his extraordinary press conference where he outed himself as the subject of the rape allegations, Mr Porter claimed NSW Police “never contacted me” in the course of their investigation.

TND contacted NSW Police on Wednesday about that claim. In reply, they sent a generic statement that had been circulated a day earlier. But on Thursday, police gave their most detailed statement yet on investigations into the woman’s claims, saying she alerted them to mental health issues she was experiencing.

Police said their first meeting with the woman was on January 27, 2020, in Sydney.

“The woman disclosed to investigators during this meeting that she had a number of health issues. She also advised investigators that she dissociates and wanted to ensure when supplying her statement that she was ‘coherent and as grounded as possible’,” NSW Police said.

“Investigators had ongoing contact on at least five occasions with the woman over the next three months.

“Her ongoing welfare was discussed, along with a plan for how and when her statement would be taken.”

The ABC has reported that police had planned to travel to Adelaide to take a formal statement from the woman in early 2020, but were stymied by the COVID pandemic and travel restrictions. By mid-year, police said the woman had changed her mind.

“On 23 June 2020 the woman sent detectives an email indicating she no longer felt able to proceed with reporting the matter, citing medical and personal reasons,” NSW Police said.

“The woman very clearly articulated in that email that she did not want to proceed with the complaint. She also thanked investigators in this email. She was very grateful for the time and support the Investigators provided to her.”

Police responded to her email the next day, June 24.

They say officers only obtained the “personal document” containing the woman’s detailed allegations – the same file sent to numerous politicians last week – after she died.

Police explained the timeline to defend their decision not to speak to Mr Porter during their inquiry, saying it would have gone against standard investigative guidelines.

“Providing a version to a suspect prior to obtaining a formal statement would have an impact on any future investigative strategies,” police said.

They said it was standard practice to provide a “person of interest” with allegations after they had given a formal statement.

Family of Porter’s rape accuser wants inquiry into her death