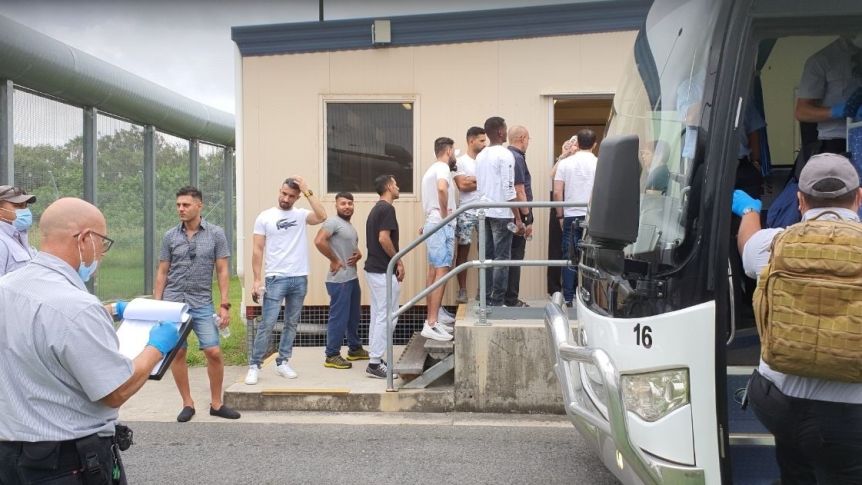 At least 25 medevac detainees are expected to be released in Brisbane. Photo: ABC/Amin Afravi

At least 25 medevac detainees are expected to be released from Brisbane immigration detention, with dozens more from around the country to follow this week, some after spending more than a year in a hotel or an alternative place of detention.

A number of men detained at Kangaroo Point Central Hotel and Apartments were in the process of being released after being transferred to Brisbane Immigration Transit Accommodation (BITA) early on Monday.

The lawyers of one of the men set to be released said the detainees would be given a seven-day humanitarian visa, which would be followed by a six-month bridging visa.

Sixty-nine people are expected to be released this week from Darwin, Brisbane and Sydney, according to a number of lawyers representing the group.

The detainees were brought to Australia for medical treatment under the now-repealed medical evacuation laws.

After almost eight years in detention, Ebrahim Obeiszadeh was told by lawyers he would walk free from the Kangaroo Point accommodation on Tuesday.

“The best part is that I won’t see any security around me,” Mr Obeiszadeh said.

“It’s the next part that everyone is waiting for – to be free.”

After the release of dozens of refugees and asylum seekers from hotels in Melbourne in January, advocates said more than 120 asylum seekers and refugees brought to Australia for medical treatment were still in detention.

Mr Obeiszadeh arrived in Australia by boat in 2013, fleeing government persecution in Iran.

After six years on Manus Island, he was transferred to Australia in July 2019 for kidney treatment.

He was then held in Brisbane’s Kangaroo Point Central Hotel from August until now.

He also spent two months at BITA during the height of the pandemic.

In September of 2020, Mr Obeiszadeh applied to be returned to Papua New Guinea because he felt “there were no other options”.

“Because I was in detention and Australia was not going to give me a visa and I wasn’t able to seek help from the UNHCR,” he said.

“Department of Home Affairs wouldn’t allow me to engage with a third country, which was the US.”

Mr Obeiszadeh said his release would be bittersweet.

“Now that they are going to release me, it’s not because they like me or they are happy for me to be in Australia,” he said.

“It’s just because the government wasn’t able to send anyone back to their original processing countries.”

She said Home Affairs Minister Peter Dutton had granted Mr Obeiszadeh a visa ahead of his return to court on Wednesday, March 3.

She said this was a move to avoid a court intervening in Mr Obeiszadeh’s continued detention if the Australian government could not meet his request to be sent back to Papua New Guinea.

“If the court intervenes, it sets a legal precedent,” she said.

The Department of Home Affairs and the Minister’s office have not responded to the ABC’s request for comment.

Speaking generally about refugee law, Peter Billings, a professor at the University of Queensland’s School of Law, said the High Court had been very clear in previous medevac asylum seeker cases that executive detention could not go on forever.

“If [the government is] not actively engaged in looking for a third-country option, then one could say that the statutory powers are spent, and therefore there is no lawful basis to continue holding them in an alternative place of detention,” Dr Billings said.

“The Australian federal governments of either political persuasion, have generally been able to defend legal action challenging the detention because they’ve been able to say, ‘We’re actively pursuing these particular statutory purposes as we’re entitled to do under the act.’

“Which isn’t much comfort for the asylum seekers, many of whom have been locked up for very many years with adverse health consequences.

“There will come a point at which the government can no longer justifiably say, ‘We’re detaining for the purposes of processing an asylum claim.’

Medevac detainees to be freed in Brisbane, Darwin and Sydney this week