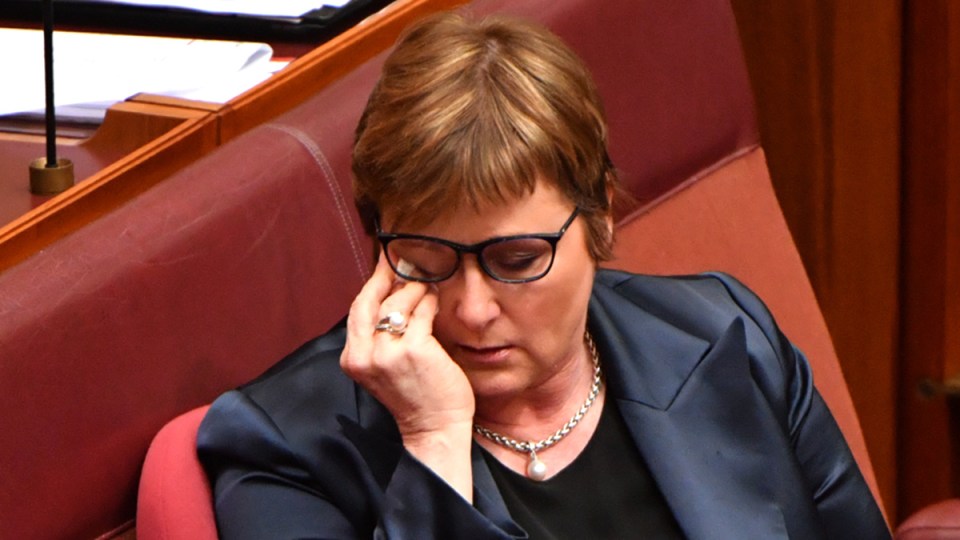 Linda Reynolds' doctor says she's not fit to face the rigours of politics for another month. Photo: AAP

Defence Minister Linda Reynolds has taken a sudden period of medical leave, just hours before she was to face the media for the first time since Brittany Higgins alleged she was sexually assaulted on the Senator’s couch in 2019.

Her office had outlined excerpts of the speech to media. But at 9.30am, Senator Reynolds’ office released a statement saying she was in hospital and “will take a period of medical leave”.

“This follows advice from her cardiologist relating to a pre-existing medical condition,” a spokesperson said.

“As a precautionary measure, Minister Reynolds has this morning been admitted to a Canberra Hospital.”

Senator Reynolds was scheduled to address the National Press Club on Wednesday at 11.30am, in her capacity as Defence Minister.

Laura Tingle, political correspondent for ABC’s 7.30 and president of the NPC, said the speech had been cancelled.

In the light of Minister Reynolds withdrawal from today's @PressClubAust address, we asked Foreign Minister @MarisePayne – who is acting in Reynolds' job – to take her place. She has declined and as a result we have reluctantly cancelled today's Press Club event

Senator Reynolds’ spokesperson did not say how long the Minister would be away from Parliament. Her office said Prime Minister Scott Morrison had called her to “express his concern and sympathy, and to wish her a quick recovery”.

Senator Reynolds was expected to be grilled by journalists over her handling of the 2019 complaint from her then-employee, Ms Higgins, that she was allegedly sexually assaulted by a fellow staffer inside the Minister’s Parliament House office. The Senator has not held any public appearances since the story broke last week.

Responding to the news on Twitter on Wednesday, Ms Higgins wrote “I genuinely hope [Senator Reynolds] is OK and wish her all the best with her recovery.”

“Let’s just hope that from this whole horrible situation there will actually be some fundamental reform to the MOP(S) Act for vulnerable staff and improvements to the workplace culture in Parliament House,” Ms Higgins continued.

The MOP(S), or Members Of Parliament (Staff) Act, is the legislation governing how political staff are hired and fired. Numerous staffers have called for serious change to the act, which they say puts them in a precarious and insecure employment situation, and can be a disincentive for victims to make complaints.

Health Minister Greg Hunt, who was giving an unrelated media conference as the news broke of Senator Reynolds’ hospital admission, urged caution and sympathy in speaking about the situation.

“We have to remind ourselves that this is the most intense, arguably, environment in Australia,” he said.

“There are many intense environments and all of us need to be aware of the pressures and pains … she is a good person and so she needs our support as she has our support.”

Mr Hunt said Senator Reynolds had been “desperate” to appear before the Press Club, and had only “reluctantly” cancelled the speech.

“It was only on the strongest medical advice that she took the reluctant decision not to do it,” he said.

“I think our compassion, our focus on the needs of others, and it is the most intense environment in the country, is something that all of us need to bring to the fore.”

I wish @LindaReynoldswa a quick and full recovery. No matter the workplace or position, everybody’s health and wellbeing must be a priority.