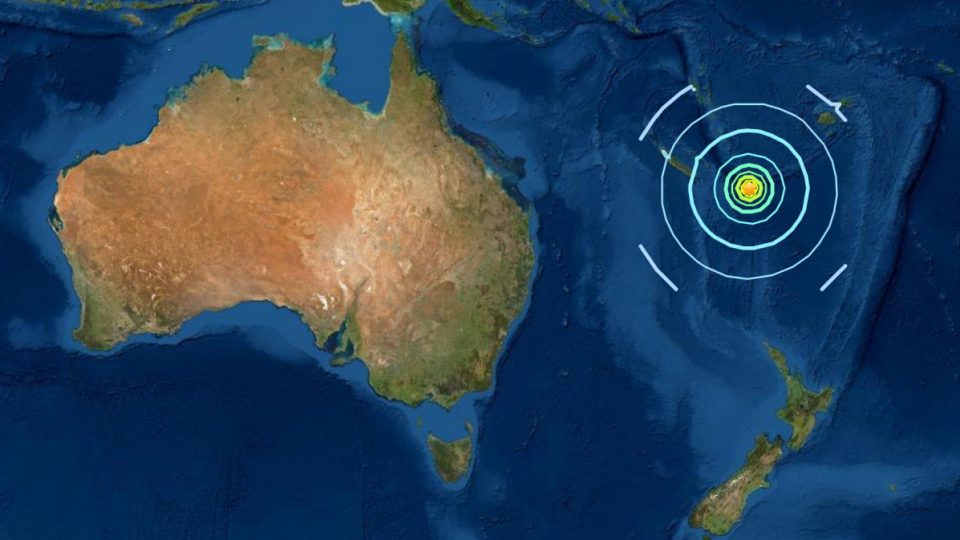 A United States Geological Survey illustration shows where the 7.6-magnitude earthquake struck in the South Pacific around midnight. Photo: AAP

Residents of a tiny island off Australia’s east coast woke on Thursday to the threat of a tsunami generated from an overnight earthquake.

Australia’s Bureau of Meteorology said people on Lord Howe Island, off the coast of NSW, should stay away from beaches.

There was a threat of “dangerous rips, waves and strong ocean currents”  early on Thursday.

“The Joint Australian Tsunami Warning Centre is advising people on Lord Howe Island to stay away from the island’s beach and the immediate water’s edge,” a BOM alert at 4am read.

“At this stage no evacuations are required at Lord Howe Island and no impact is expected for the Australian mainland.”

The New Zealand National Emergency Management Agency said people should get out of the water, off beaches and away from harbours, rivers and estuaries in areas from Ahipara to the Bay of Islands, Great Barrier Island and from Matata to Tolaga Bay.

“We expect New Zealand coastal areas to experience strong and unusual currents and unpredictable surges at the shore,” it said.

Geoscience Australia said the 7.6 magnitude quake’s epicentre was about 400 kilometres east of Tadine, New Caledonia, at a depth of 54 kilometres.

The quake, which occurred at 12.20am Thursday (AEDT), followed at least three other tremors in the region with magnitudes ranging from 6.0 to 6.2 in a span of just over an hour.

“Some tsunami waves of under 40 centimetres have been observed at Norfolk Island, Port Villa and Fiji,” the BOM alert said.

“People in areas with threat of land inundation and flooding are strongly advised by emergency authorities to go to higher ground or at least one kilometre inland,” the JATWC bulletin advised.

The US Tsunami Warning System said a tsunami watch was in effect for American Samoa and there was potential for tsunamis in other regions including Vanuatu, Fiji and New Zealand.

Waves of up to a metre above normal tide levels were possible for some coasts of Vanuatu, Fiji and New Zealand, it said.

By 9am (AEDT), however, the warnings had been cancelled. Authorities said any tsunami threat to mainlands in Australia and New Zealand had passed.

“Based on the most recent modelling and decreasing tsunami amplitudes at North Cape, Great Barrier Island and the East Cape, the tsunami threat has passed for New Zealand,” the National Emergency Management Agency said.

“There could still be large unexpected currents and the public are advised to continue to take precautions in coastal zones for the rest of today.”

Australia also cancelled the marine tsunami warning for Lord Howe Island. There was no threat to the mainland, it said.

There were no immediate reports of damage near the epicentre in New Caledonia, John Ristau, a seismologist from New Zealand-based GNS Science, told NewsHub’s The AM Show.

“It’s most likely that damage would have been minimal if anything at all,” he said, adding that Thursday morning’s earthquake could trigger more tremors.