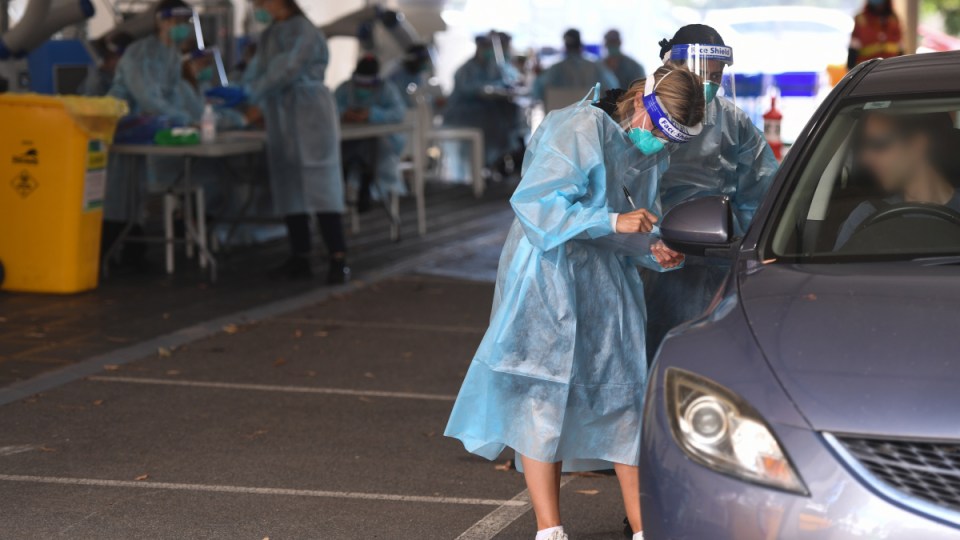 COVID testing has stepped up across Melbourne after the latest hotel outbreak. Photo: AAP

A returned traveller in hotel quarantine in Victoria has been transferred to intensive care after being infected with COVID-19.

“One hotel quarantine case … has been transferred to hospital and I’m advised is in intensive care. That’s a returned traveller, not a
community case,” he said.

Meanwhile, authorities have confirmed the woman revealed as the second Victorian hotel quarantine worker to catch the virus in less than a week has the highly infectious UK variant.

Aged in her 50s, she is an authorised officer at the Holiday Inn at Melbourne Airport. Mr Andrews said the woman’s close contacts and 136 co-workers are in isolation and have been tested, with results pending.

“I can confirm that genomics have come in this morning in relation to the Holiday Inn case, confirming it is the UK strain,” he said.

But the early signs are good, with no other local positive cases yet stemming from the two infected workers in the past week. The first case, a man who worked in Australian Open quarantine, tested positive last Wednesday.

Victoria had no new local or international infections on Tuesday.

NSW Health is still investigating the source of the infection in a returned overseas traveller who tested positive to COVID-19 after being released from hotel quarantine.

The person, who is from the Wollongong area, returned two negative tests during their quarantine at Sydney’s Sofitel Wentworth. They tested positive in a day 16 test after being released from quarantine.

NSW Health said the patient’s 10 close contacts have also since tested negative to the virus.

There are several health alerts for venues in southern Sydney and near Wollongong. See the latest list here.

Back in Victoria, a testing blitz is continuing after Sunday’s hotel quarantine case. Testing capacity has been boosted near exposure sites, which include a bottle shop, cake shop and clothing store.

More than 100 people, including 12 Australian Defence Force members and nine police officers, have been identified as close contacts of the Holiday Inn worker.

They have been tested and are required to self-isolate for 14 days after their last contact.

Another 17 people, up from 15 on Monday, have been deemed social and household close contacts and will follow the same routine.

She has since worked with contact tracers who identified three potential exposure sites in Melbourne’s north-west.

Emergency Services Minister Lisa Neville, who is responsible for the state’s quarantine program, said the woman did not appear to have breached any infection control protocols.

He also signed off on Sydney’s Cumberland area – encompassing parts of Auburn, Parramatta and Holroyd – moving from an “orange” to “green” zone from 6pm on Monday.

It was the last remaining NSW local government area to change to a green-zone classification under Victoria’s “traffic light” permit system.

Meanwhile, the Australian Open got off to a subdued start on Monday with an attendance cap, overcast weather and no school holidays making for an unusually quiet day one at Melbourne Park.