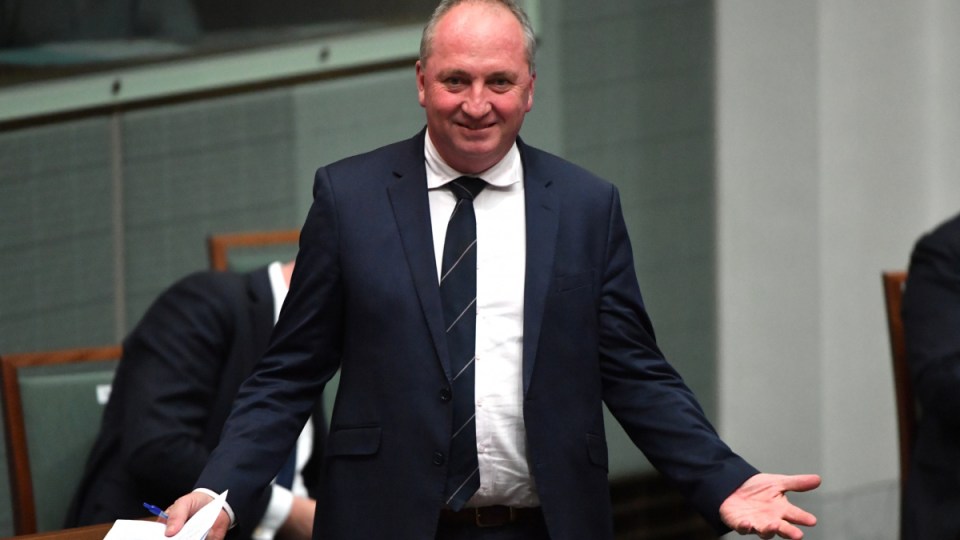 Prime Minister Scott Morrison faces an open revolt from inside his party as the government takes tentative steps toward a net zero climate goal, with Nationals colleagues claiming such a target – embraced by every major Australian trading partner – is “mythical”.

An almighty brawl is brewing in the Coalition, after Mr Morrison opened the door to a net zero by 2050 commitment last week.

A trio of backbench Nationals MPs say such a target would hurt farmers – even while the National Farmers Federation says it wants a net zero future.

Mr Morrison said previously he expected Australia would hit that critical climate benchmark in the second half of this century, without offering a firm timeline. Last Monday, he said he wanted it “as soon as possible, preferably by 2050.”

Net zero is a goal embraced by most of Australia’s major trading partners and allies – the US, Britain, Japan, South Korea, China, India and Canada – and seen as a crucial measure to avert devastating climate change and temperature rise.

There are fears Australia would be considered a global pariah on climate without such a commitment. The European Union is already considering imposing climate tariffs on Australia under a free trade deal being negotiated.

But even Mr Morrison’s tentative words – “preferably by 2050” – have sparked outrage in the Nationals, the junior Coalition partner.

That idea was rubbished by Mr Joyce (who wants the leadership back from Mr McCormack), Senator Canavan (who supports Mr Joyce and quit the ministry a year ago to support a leadership spill), and Senator McKenzie (who was dumped as deputy leader a year ago over sports rorts).

“It’s a bit like saying if we just shut down 95 per cent of our economy but protect 5 per cent, everything will be OK.”

“How are we going to mine coal?”

In an opinion piece in The Australian newspaper, Mr Joyce repeated previous claims that a 2050 target was unreasonable because it was 30 years away.

He wrote that “many of the politicians and commentators talking about a 2050 aspiration will be dead by then. They won’t have to deal with the economic consequences or pay for the policy”.

In 2050, Mr Joyce will be 83. Senator Canavan will be 70. Senator McKenzie will be 81. According to an August 2020 report from the Australian Institute of Health and Welfare, the average life expectancy for an Australian is 83.

In what could be a pointed rebuke to Mr McCormack, Mr Joyce wrote that “if the Nationals supported net-zero emissions, we would cease to be a party that could credibly represent farmers”.

On Tuesday, Senator McKenzie told Sky News that she did not dispute the science of climate change. But she said she was against a legislated net zero target, criticising what she described as “unintended consequence of the balloon floated by the Prime Minister”.

“Agriculture is voluntarily changing farming practices on-farm, looking at moving agriculture more broadly across a whole range of commodities, to lowering their emissions,” she said.

“Since 1996, [agriculture] has reduced its emissions by 60 per cent and our red meat industry … has committed to net-zero emissions by 2030 on their own without a government mandate.”

But despite the views of the trio of maverick Nationals and Mr McCormack, the National Farmers Federation said its members were “in the box seat to seize the opportunities from a reduced emissions future”.

“Any policy that restricts opportunities available to farmers and rural and regional communities would clearly be a negative outcome,” NFF president Tony Mahar said.

Mr Mahar said the NFF backed net zero, because there was an “economically viable pathway” to the goal – as long as agriculture was left “not worse off”.

Senator Canavan and Mr Joyce have threatened to ‘cross the floor’ and vote against their own government, if a net zero target is proposed in legislation. However, it’s understood such a target would not need formal legislation, and could be pursued through regulatory changes.

“This policy on the run from the government on such an important national priority, and such a critical sector is beyond belief,” he told The New Daily.

“The government is at complete odds with the National Farmers Federation, Meat and Livestock Australia, the pork industry and the wider sector. Once again, the embattled Minister Taylor is nowhere to be seen.”

Mr Morrison will have to to thread the needle between keeping the Nationals on side, and meeting international demand for a stronger climate position. The election of US President Joe Biden, with his commitment to strong environmental reforms and reinvigoration of the Paris agreement, is seen as making a more robust Australian climate commitment a near-inevitability.

The Glasgow climate summit is looming in November, and the EU carbon tariffs are yet another fly in the ointment as Mr Morrison looks to balance domestic politics with international pressure. The small mention of a net zero goal “preferably” by 2050 has set off a storm in Canberra, so expect this stoush to continue for much of 2021.