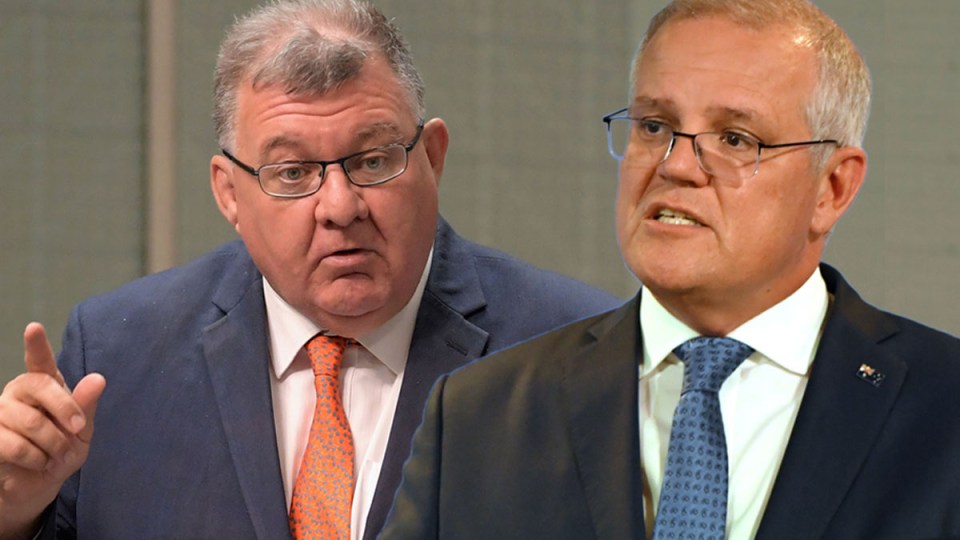 Scott Morrison has rebuked Craig Kelly after his Parliament House confrontation with Labor’s Tanya Plibersek, the Prime Minister telling the rogue MP to stop rubbishing official health advice and to pull back on his social media activity.

Mr Morrison is said to have made it “very clear” that he doesn’t support Mr Kelly’s controversial Facebook posts, in which he has spread months worth of disputed medical claims that have been repeatedly shot down by Australia’s leading government health officials.

However, the PM is still under pressure to make a public statement distancing himself from Mr Kelly, while the embattled MP himself has not committed publicly to winding back his online rhetoric.

Following his appearance on a podcast from disgraced celebrity chef Pete Evans, the issue came to a head on Wednesday morning when Mr Kelly confronted Ms Plibersek in front of a pack of journalists.

The Labor MP accused Mr Kelly of spreading “crazy conspiracy theories”, while he shot back that the opposition had made “slanderous” claims about him.

The New Daily has been told by senior government sources that Mr Kelly was summoned by Mr Morrison immediately after the square-up with Ms Plibersek was splashed across TV and social media.

It’s understood that Mr Morrison said he did not support Mr Kelly’s recent conduct, nor his views, and that the embattled MP was asked to stop spreading information that contradicts Australia’s federal health officials. Mr Morrison is said to have told Mr Kelly that his actions, which cast doubt on official health advice, were hurting the government’s vaccine rollout plans.

Mr Morrison has not yet made any comments publicly. He is expected to be asked about Mr Kelly at Wednesday’s parliamentary Question Time.

In a statement, Mr Kelly confirmed the meeting.

Kelly says he “agreed to support the government’s vaccine rollout” & that they spoke about “ensuring public confidence”#auspolhttps://t.co/3JqsnAIaJL pic.twitter.com/uGYuwNdNY3

“I believe that the spread of misinformation can damage the success of our public health response during the pandemic.”

Mr Morrison has been under pressure from the Labor opposition to publicly chastise Mr Kelly and correct his claims. The PM has been reluctant to do so, instead sharing general advice like “don’t go to Facebook to find out about the vaccine” and “go to official government websites” when asked about his rogue MP.

On Monday, Mr Morrison said Mr Kelly “does a great job” as member for Hughes.

In their Wednesday meeting, the Prime Minister was said to have told Mr Kelly to focus on his local electorate.

Mr Kelly said as recently as Wednesday morning that he expected to be re-endorsed as the Liberal candidate for Hughes at the next federal election. However, some reports say he could be challenged in a pre-selection contest.

Veteran Liberal MP Kevin Andrews was defeated in such a pre-selection contest over the weekend.

Many Labor MPs have slammed Mr Kelly in recent days. Health spokesman Mark Butler claimed “Craig Kelly is a dangerous menace and a threat to the nation’s COVID response”.

On Wednesday, Ms Plibersek held an informal ‘doorstop’ in the press gallery corridor, after an interview on Sky News. She had called out Mr Kelly’s COVID claims, including that making children wear face masks was “child abuse”.

Mr Kelly, coincidentally, was walking down the same corridor on his way to an interview with the Nine Network. The pair came face-to-face, and Ms Plibersek criticised the member for Hughes.

She said her mother, brother and other family members lived in his electorate, and said she didn’t want them at risk of COVID

“The government is spending $24 million on a campaign telling people to get vaccinated, and we’ve got a taxpayer-funded nong running around telling people not to,” Ms Plibersek said at her press conference.

“I don’t want them going to the shops, getting in contact with people who’ve refused to be vaccinated because their local MP is spreading conspiracy theories on the internet … he needs to shut up.”

In his own press conference shortly after the confrontation, Mr Kelly claimed it was “slanderous” to say he was spreading misinformation. On his Facebook page, which regularly gains more interactions and reach than other senior ministers and opposition spokespeople, Mr Kelly posts multiple times a day in support of hydroxychloroquine and ivermectin as potential COVID treatments.

Both treatments have been repeatedly dismissed by local and global health experts, including Australia’s chief medical officer Professor Paul Kelly and the Therapeutic Goods Administration.

He also defended his appearance on Evans’ podcast. Mr Kelly said Evans “has done things wrong, done silly things” but repeated earlier defences that he believed in debating people with whom he disagreed.