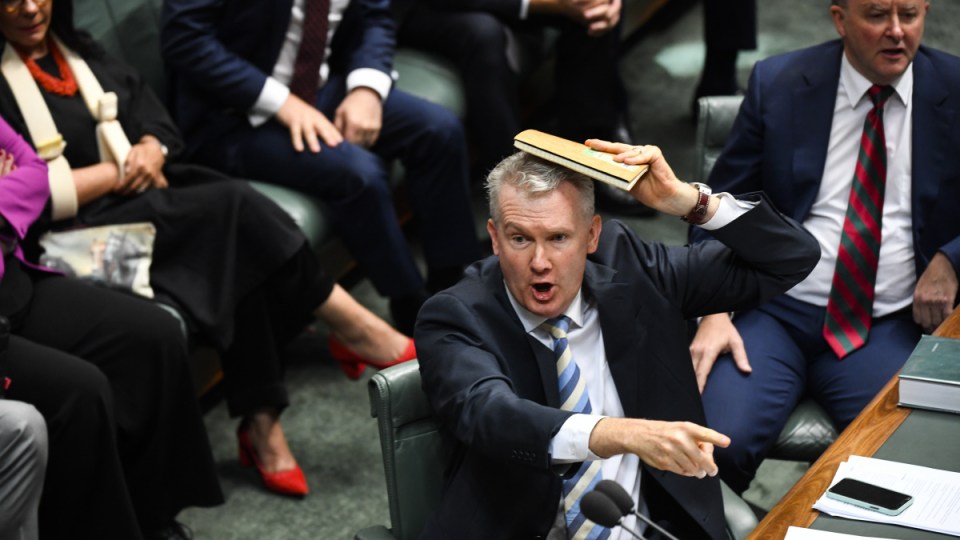 Tony Burke says the "norms" of Parliament are being trampled.

Labor shadow minister Tony Burke has launched a stinging attack alleging the federal government’s actions “trash the norms” of Parliament, and that scores of gagged debates have made him the “most closed down” politician in Australian history.

“Never before have we had a government so determined to shut down an Opposition,” claimed Mr Burke, the manager of opposition business.

“This is not normal. Governments of both persuasions have used their numbers to silence the other side from time to time – but not like this, not systematically, not as a matter of course.”

But Mr Burke’s allegations the government was trying to avoid Parliamentary scrutiny drew an equally fierce response from the Coalition, with Attorney-General Christian Porter claiming the Opposition was often trying to “disrupt the program pointlessly”.

“It’s not all about Tony,” Mr Porter, the leader of the house, told The New Daily.

Mr Burke has levelled strong concerns about the management of debate in the House of Representatives, the lower chamber in Australia’s Parliament.

In an opinion piece, published in The New Daily on Thursday, he drew on research and statistics from Parliament’s Procedure Office.

“Since the start of the 46th Parliament there have been about 538 divisions in the lower house,” Mr Burke wrote.

“Just 18 of those divisions have occurred to pass legislation. A staggering 233 have occurred to prevent Opposition MPs giving speeches. That means government MPs have voted more times to silence their political opponents than they have to make laws – by a factor of 13.”

The government’s majority in the House of Representatives means it can use the rules of the chamber to essentially close down debate, order other members to stop speaking or rush legislation to a vote, almost at will.

The government and Mr Porter, as leader of the house, get to largely set the agenda for debate and choose which bills are considered.

Mr Burke claimed an inglorious record for himself, saying he was “the most ‘closed down’ member in the history of the Parliament.”

The Procedure Office told Mr Burke they were “unable to find any other member with as many closure motions successfully moved against them” as he had.

This included the 2019 Fair Work Amendment bill, which the government had tried to push to a final vote before a full debate had occurred; and an environmental protection bill in September, which was rushed to a vote before all members could speak on it.

“This denies members – and by extension the people who voted for them – their say on important issues. It shows contempt for the parliament and the public,” Mr Burke claimed.

Mr Porter, often Mr Burke’s direct rival in stoushes over procedure and debate in the chamber, launched a withering attack of his own.

“The government has focused over the past year on ensuring the passage of critical pieces of legislation to help Australians deal with the economic and health impacts of COVID-19,” Mr Porter said.

“Mr Burke and Labor’s constant effort to disrupt the program pointlessly will be dealt with in the normal way.”

Parliament is due to resume on Monday for the first time this year.

Federal MPs are set to continue debate on contentious issues like the government’s omnibus industrial relations bill, calls to permanently raise the JobSeeker welfare payment, and further assistance for COVID-hit sectors like tourism and hospitality.

In the first sitting of what is tipped to be an election year, expect the sparks to fly.

Labor slams government for gagging debate, claiming it is ‘most closed down’ in history