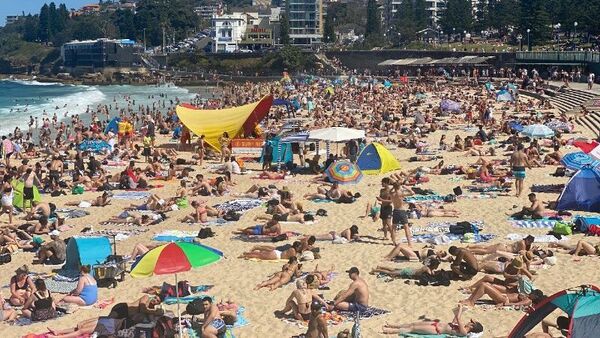 Most parts of NSW and the ACT have sweltered through a second consecutive night, as thousands head to the beach seeking relief from the heat on Australia Day.

Temperatures across most of southeast Australia have spiked over the past three days, with a cool wind change on Monday delivering milder conditions in South Australia, Tasmania and most of Victoria.

But in NSW and the ACT the heat has continued on Australia Day, prompting warnings from health authorities for people to stay hydrated and safe around water.

NSW Surf Life Saving chief executive Steve Pearce said beaches along the state’s coast were already packed by 10am on Tuesday, with many nearing capacity.

Sunday was a test run for authorities, one of the busiest days in years, with 250 rescues and 750 first aid treatments.

With high temperatures, the big swells, the large crowds, Tuesday will be even bigger, he said.

“We have all our assets out on the water – every jetski available, every rubber duck, we have our Westpac rescue helicopter in the sky, and we have our drones flying everywhere as well.”

Six people have drowned in NSW in the past eight days, while another two men drowned in separate incidents in Victoria on Saturday.

A man who was snorkelling died after being pulled from the water at Narrabeen on Sydney’s northern beaches on Monday, while emergency services are searching for another man who disappeared while snorkelling near Batemans Bay on the NSW South Coast.

A boy was also pulled from the water unconscious on Monday in Sydney’s northwest and taken to hospital in a critical condition.

“We’re tracking for a really tragic summer,” he said.

“Statistically, every Australia Day one person will drown along the NSW coastline.”

“That’s the reason why we’re on such high guard today… we know it’s going to be operationally frenetic.”

Drownings are 2.4 times more likely to occur in Australia on public holidays.

NSW Ambulance’s Kay Armstrong said call-outs over the weekend were double the average level, and urged people to stay hydrated and look out for each other until the heatwave subsided.

“We will see a change move across (NSW), starting across the south, bringing cloud and rain in the morning [Tuesday] to southern areas,” she said.

But the cool change may not reach Sydney until late on Tuesday evening.

Canberra will have temperatures in the low 30s on Australia Day before a late shower.