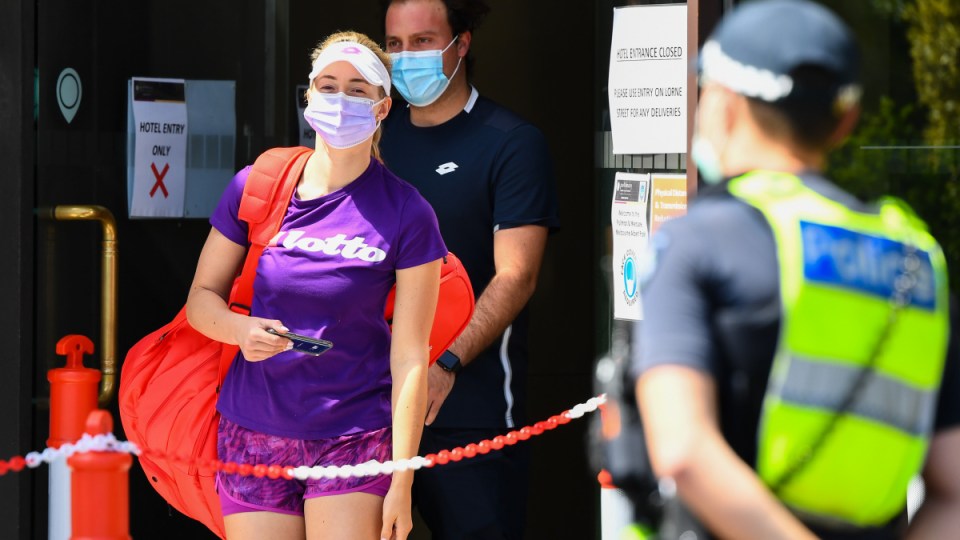 Due to strict quarantine rules with the players, Australian Open officials announced an extra women's tournament in the lead-up to the Grand Slam on February 8. Photo: Getty

Victoria has recorded six coronavirus cases in hotel quarantine as the state’s stretch of no local infections reached 19 days.

At 12pm, COVID-19 Quarantine Victoria reported that none of the new quarantine infections were connected to the Australian Open.

A total of 72 players remain in hard lockdown after three chartered flights to the Australian Open returned positive cases.

They include former Australian Open champions Victoria Azarenka and Angelique Kerber as well as 2019 US Open winner Bianca Andreescu.

Unable to leave their rooms to train, an extra women’s tennis tournament in the lead-up to the Open on February 8 has been announced, seen as an olive branch to athletes given the disadvantages they faced in the build up to a two-week grand slam event.

“This has been a particularly challenging time for the athletes in hard lockdown and we, along with the WTA and ATP, aim to do everything we can to help,” Australian Open tournament director Craig Tiley said.

“These changes to the lead-in events have been made to give the 72 players a little bit of extra time to help them prepare. We also will prioritise them for things like practice sessions, gym and ice baths.”

Emerging Ukranian talent Dayana Yastremska is among those locked down, but won’t feature in any tournament after her appeal to lift a doping ban was rejected on Sunday.

The world No.29 sparked controversy when she was filmed on a Tennis Australia charter flight to Melbourne for the Open despite testing positive to a banned substance in an out-of-competition sample.

She was then placed in a hard 14-day lockdown after a passenger on that flight returned a positive test of their own.

Her situation worsened when the International Tennis Federation released a statement on Sunday saying that an independent tribunal had denied the 20-year-old’s application to have her provisional ban lifted.

Portugal’s Joao Sousa will miss his first grand slam since 2013, joining British great Andy Murray as a grand slam casualty because of a positive COVID-19 test.

Sousa since returned a negative test and has no symptoms, but with a 14-day quarantine on arrival has run out of time to join the field.

His withdrawal comes after it was revealed three non-playing people in hard lockdown who tested positive after travelling for the Open had the highly-contagious UK strain of the virus.

Monday also marks the one-year anniversary of Australia’s first coronavirus case, a man in his 50s in Victoria who had arrived in the country from Wuhan.

Meanwhile, New Zealand appears likely to avoid a fresh lockdown despite a new COVID-19 case being identified in the community.

On Sunday, health authorities revealed a 56-year-old Northland woman had tested positive for the virus after completing her 14-day isolation on arrival to New Zealand.

The woman returned two negative tests while in her compulsory hotel stay, and was released on January 13 before travelling around the region with her husband.

Health officials are continuing to rapidly contact trace the woman’s contacts and movements, asking for people who have interacted with her to isolate and get tested.

“Her husband would without doubt be her closest contact. That coming back negative is a good sign. We’ll know more as the day unfolds as to what the overall risk of this case is,” Mr Hipkins said.

The woman has been praised by authorities for tracking her movements using the government’s COVID Tracer app and reporting her symptoms to health workers.

The health department has released a list of the 28 places she visited on her travels since being released, including supermarkets, cafes and retail stores.

Mr Hipkins said new testing stations were being opened in Northland but the case wouldn’t prompt the government to tighten its border regime.

“We haven’t got any evidence that the 14-day isolation and two tests isn’t sufficient,” he said.

“Around 100,000 people that have gone through that process, not one of them has taken COVID-19 out into the community with them