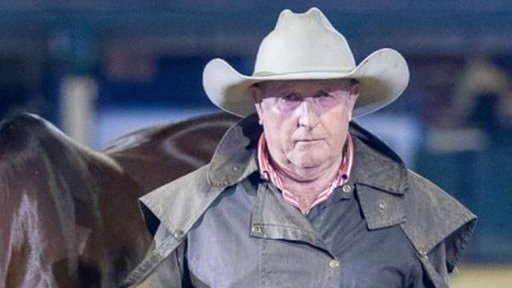 Popular rodeo personality Bruce Green has died in hospital after being charged by a bull at Tamworth. Photo: ABCRA

Tributes are flowing for popular rodeo horseman Bruce Green who died after being charged by a bull at a rodeo in northern NSW.

Paramedics treated the 62-year-old Grafton local after the incident at an event centre in Tamworth on Saturday night before he was taken to hospital, where he later died.

The Australian Bushmen’s Campdraft and Rodeo Association (ABCRA) has paid tribute to ‘Greenie’, as he was known, who was a long-term member of the organisation’s board.

“Greenie has always ‘been there’, always part of the Rodeo, out there making it happen, never asking anything but always giving everything. A great bloke and a diamond in the rough. Generous in every way,” ABCRA said in a Facebook post.

“We are all in shock and deeply saddened. The Board and Members of the ABCRA extend our deepest sympathies to Bruce’s family and friends.

“We are holding you all close in our thoughts and wishing you moments of peace and comfort as we all reflect on the life and value of a wonderful fellow.

“Greenie, you’ll be sadly missed by us all.”

Hundreds of people have been paying tribute to Mr Green in Facebook posts, with widespread shock at the death of the popular rodeo figure.

“Very sorry to the news of Bruce’s death a great friend for many years I will miss you Mate RIP Condolences to Family and friends,” John Fahey wrote.

Clarence Valley man Bruce Green, 62, was working as a yardman at the Australian Bushmen's Campdraft and Rodeo Association event on Saturday when a bull charged at him. He was rushed to hospital where he later died from his injuries. https://t.co/z2bADpwL2C

Ian Bostock said Mr Green was a “great horseman” who would be missed at rodeos, shows or “galloping down the mountain jumping into the Maclean arena on your little bay horse”.

“Have the greatest respect for your abilities. Never new were you would turn up like Dalby stock horse sale, always a pleasure sorry mate. RIP,” Mr Bostock wrote.

Police say they will investigate the events leading up to Mr Green’s death.

It is believed to be the first human death involving an animal at a rodeo in Australia since 33-year-old Greg Meech died after being stomped by a bull at Caboolture in Queensland back in 2007.