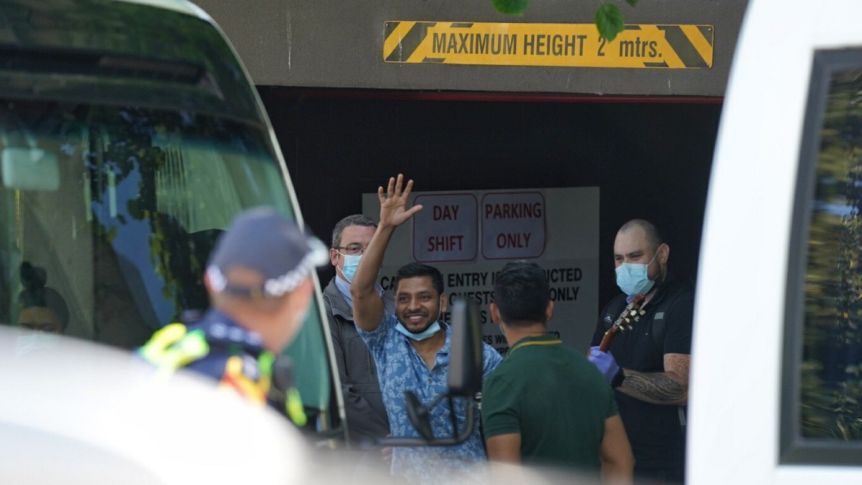 A refugee waves as he leaves the Park Hotel in Melbourne earlier in 2021. Photo: Kelsey Hannah

At least 45 refugees and asylum seekers have been freed from immigration detention in Melbourne, where some have spent more than a year detained in inner-city hotels, advocacy groups say.

The men were allowed to leave the Park Hotel and the Melbourne Immigration Transit Accommodation (MITA) on Wednesday, according to Ian Rintoul from Refugee Action Coalition.

Legal representatives for some of the men who were still detained said they had been told they would be freed on Thursday.

“We’ve got 100 cases where people are still in detention, and the minister has indicated that he’s considering granting the visas in a number of other cases,” Daniel Taylor from Sydney West Legal said.

Most of the men had cases pending in the court, where lawyers planned to argue they were being illegally detained.

The men who are being released were brought to Australia under the now-repealed medical evacuation law – widely referred to as the Medevac law – which allowed refugees and asylum seekers in offshore detention to enter the country for urgent medical treatment.

Ramsi Sabanayagan, a Tamil refugee from Sri Lanka, learned that he will be freed after eight years in immigration detention.

“Tomorrow morning, I am released,” the 29-year-old refugee said.

Mr Sabanayagan said he arrived on Christmas Island in July 2013 and was later transferred to Manus Island in Papua New Guinea, where he spent more than six years in Australian immigration detention.

In November 2019, he was transferred to Australia under Medevac to receive treatment for mental health issues and severe headaches caused by shrapnel wounds.

Mr Sabanayagan said in recent months he had made multiple requests to immigration officials to be returned to PNG but didn’t receive a response.

Police cars lined the streets outside the Park Hotel in Melbourne on Wednesday as officials prepared to move the men to the Melbourne Immigration Transit Accommodation (MITA) to be processed.

Images showed at least one man waving to supporters as police escorted him to a waiting bus.

Within hours, some walked out of the gates of MITA, according to the Asylum Seeker Resource Centre (ASRC).

“The entire refugee movement is feeling a great sense of relief that people are finally being released,” Jana Favero from the ASRC said.

“People’s mental and physical health rapidly deteriorated over the past year, especially with the pandemic.”

The Home Affairs department has long maintained the men’s stay in Australia would be temporary, and that as soon as their treatment was over they would be returned to PNG, Nauru or another country that was willing to take them.

Before being transferred to Australia for medical treatment, the men had spent years in offshore immigration processing centres on Manus Island in Papua New Guinea and Nauru.

Under Australia’s immigration policy, asylum seekers who arrive by boat are told they will never be settled in the country.

The Medevac legislation passed in February 2019 was short-lived, as the government opposed it and repealed it in December 2019, months after the federal election.

Home Affairs Minister Peter Dutton claimed the legislation offered a “back door” into the country that refugees would exploit to stay here.

“No one who attempts illegal maritime travel to Australia will be permanently settled here,” the spokesperson said.

The Home Affairs spokesperson did not confirm what visas the men had been given, but said final departure bridging visas give holders the right to temporarily reside in Australia while they finalise their arrangements to leave.

Home Affairs did not respond to requests to confirm the number of men who were being freed.

Mr Taylor from Sydney West Legal said all of his clients who had been in detention had asked to return to PNG or Nauru, but their requests were ignored.

“Regional processing has occurred and it has finished and they are here,” Mr Taylor said.

“They are determined for the most part to be refugees and now Australia has to exercise its responsibility under the Refugees Convention towards people who are refugees.”

Hundreds of people were transferred to Australia under the Medevac legislation.

Most were held in Alternatives Places of Detention (APODs), namely hotels in Melbourne and Brisbane while they received medical treatment.

Some of the refugees said they did not receive adequate medical care and were confined to their rooms for 23 hours a day.

Mr Rintoul from Refugee Action Coalition said he welcomed the decision to release the men, but said another 145 still being held should be freed, too.

“While, it is very good news that the government has begun the release of refugees brought from Manus and Nauru for medical treatment, they should never have been held in detention in Australia,” Mr Rintoul said.

“They should all be released immediately.”

Kurdish refugee Farhad Bandesh was among the first group of men who were released in December.

He said he tries not to think about the prospect of the government revoking his visa or deporting him from the country.

“I think we will see what they’re going to do, you know,” Mr Bandesh said.

“I don’t think about that. I want to heal myself from the pain.”