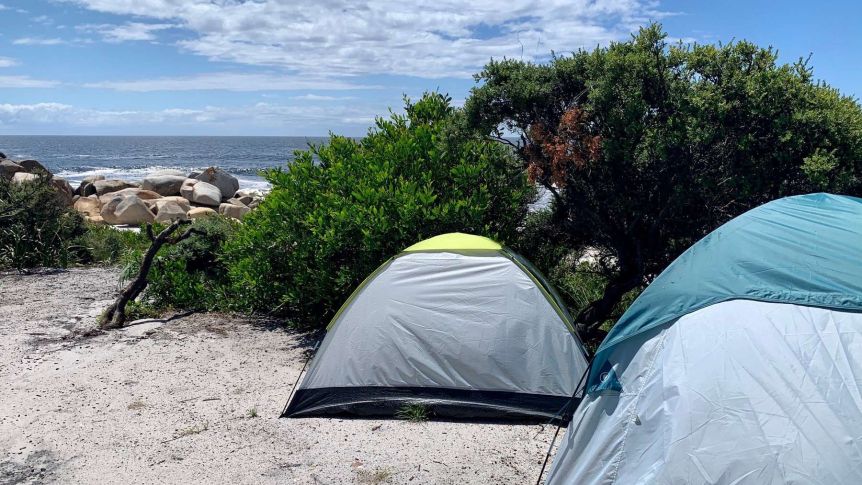 Tasmania's Bay of Fires is a popular camping destination for tourists and locals. Photo: ABC News

Susan McKinnon and her family have been holidaying on Tasmania’s east coast for the past 14 years.

They normally head up from Hobart in January, but this year they decided to come up early fearing they would miss out on a camping spot.

“Last year we were lucky to get the spot we found, so we came early this year,” she said.

She said she has seen people driving around looking for camps and not being able to find anything because sites have already been set up in advance – and often empty inside.

“People have always been doing this … and I guess people sort of feel they have the right to do it, there’s no signage to say you can’t do it.”

Darryl Bain travelled from Launceston to camp along the east coast and said there are tents near his camp that have been empty for weeks.

“When you find empty tents, it’s a bit annoying really,” he said.

“They should just use the site while they’re here like everyone else does, and then leave when they’re not using it.”

Craig Dennyson has trekked around Australia for the last five months and said Tasmania’s “ghost sites” are the worst he’s seen.

“We’ve been here for around three weeks now and we were lucky to find a spot, it was quite busy already and that was on the 16th of December,” he said.

“They’re locals [nabbing the spots], clearly locals, so they’re entitled to it but it is frustrating,” Mr Dennyson said.

“There are a lot of people who come and cannot find a spot and have gone and no one’s been there.

“It does happen everywhere but here where they’re free it’s worse.”

Currently, Tasmania’s Parks and Wildlife Service allows a maximum stay of 28 days in the one spot.

After that time, it says a ranger will move people on – but enforcing it is a growing issue.

“I don’t think it should happen,” he said.

“It’s unfortunate, we do have people who do it, but it doesn’t just happen in Break O’Day … it happens in Cockle Creek, Lake Barrington, it happens all over the place.”

On the ABC Hobart Facebook page, social media users said it has been a problem for years.

“My daughter and family tried to find a decent tent spot in the Bay of Fires reserve a week ago … So many sites were already taken and reserved with parked caravans, tents etc by absent “campers”, one user said.

Another said, “If not occupied for 24 hours it should be removed/towed at the owner’s expense to free the site up for someone else.”

Others said some people may have taken their belongings with them to avoid theft.

“If you’re going for a walk don’t leave anything in your tent. Pretty smart if you ask me. What right do people have opening tents? Not cool,” one Facebook user said.

“Why are they snooping around people’s campsites?” one user asked.

Calls for a booking system

Since photos of the abandoned sites, some even with human faeces at the campsites were shared online, it has renewed calls for a booking system to be introduced.

One user on the ABC Hobart Facebook page said they would be more than happy to pay a fee and use a booking system.

“Bay of Fires should be a booking system and fees put in place, with a maximum stay time of 14 days, especially in peak season,” one user commented.

Another said, “If it continues, there will be a booking system, which will cost money, and ultimately we’ll all pay because of the selfish minority.”

“A booking system and payment just like at Richardson’s Beach would be the best way to fix it,” another posted.

The Mayor said something needed to be done.

“I’m a great supporter of free camping … but people do need to be honest with themselves, they should not take up camp sites if they’re not there,” Cr Tucker said.

“We need to make sure this doesn’t destroy free camping – a handful of people doing the wrong thing.”

Cr Tucker said camping would be a key topic of the Bay of Fires masterplan being developed by the council, Parks and Wildlife and East Coast Tourism.

“What they’re doing is not reducing camp sites but they’re going to actually define what a camp site is … there’ll be sites that will be for tents, sites that’ll be for caravans, and sites designed for mobile homes,” he said.

“Parks and Wildlife are very restrained by, I suppose, the number of feet on the ground and resources available to do everything for everyone all the time, so I think we need to be fair to them as well.

“I think we need to be patient and wait for that masterplan to be finished and go from there.”

In a statement, Parks and Wildlife said the north-east of Tasmania was a very popular holiday destination and that there could be a very high demand for camp sites.

It also said there is signage in place on site to remind visitors of the length of stay permitted.