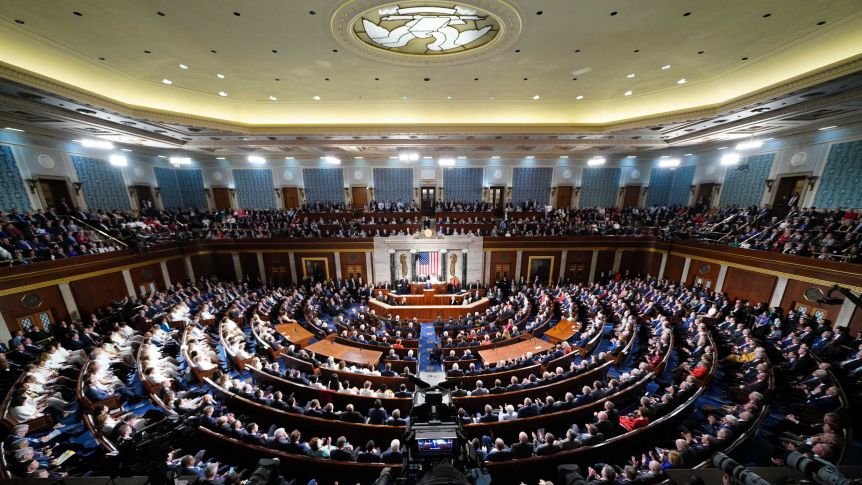 The package would provide direct payments of $US600 to individuals and boost unemployment payments by $US300 a week. Photo: Reuters

US congressional leaders have reached an agreement on a $US900 billion ($1.19 trillion) package that will provide the first new aid in months to an economy battered by the surging coronavirus pandemic.

The package would be the second-largest economic stimulus package in US history, following a $US2.3 trillion aid bill passed in March.

It comes as the pandemic accelerates, infecting more than 214,000 people in the country each day.

BREAKING: As the American people continue battling the coronavirus this holiday season, they will not be on their own.

Congress has just reached an agreement. We will pass another rescue package ASAP. More help is on the way.

Republican and Democratic leaders said the package should have enough support to pass both chambers of Congress.

White House spokesman Ben Williamson said US President Donald Trump supported the bill and would sign it into law.

The package will give direct payments of $US600 to individuals and boost unemployment payments by $US300 a week.

These are people’s jobs and livelihoods, and they need this help now. I won’t stop fighting for them. #COVIDrelief https://t.co/kgiB9H3nSg

It extends a moratorium on foreclosures and provides $US25 billion in rental aid.

But Democratic Senate leader Chuck Schumer said the funding fell short of what was needed.

“Anyone who thinks this bill is enough does not know what’s going on in America,” he said.

He said he would push for more aid after Democratic president-elect Joe Biden took office on January 20.

US politicians said they had resolved disputes over the Federal Reserve’s pandemic lending authority and other issues that had forced negotiations into the weekend.

The Democratic-led House of Representatives will likely vote on the package on Monday local time, with the Republican-controlled Senate to follow, according to House Democratic leader Steny Hoyer.

Congress aims to include the coronavirus aid package in a $US1.4 trillion spending bill funding government programs through September 2021.

That funding was due to expire at midnight Sunday in the US.

The House and the Senate both voted to extend funding, buying more time to pass the coronavirus package and the larger government spending bill.

The relief bill leaves out two of the most contentious elements in the negotiations: Legal protections for businesses from coronavirus lawsuits, which had been sought by Republicans, and the substantial aid for state and local governments advocated by Democrats.

But the package helped state and local governments indirectly by providing billions for schools, coronavirus testing and other expenses, Mr Schumer said.

It also includes elements unrelated to the pandemic: a bipartisan provision that aims to end surprise medical billing, and one that authorises flood control and other water-related projects.

The bill would allow Federal Reserve emergency lending programs to expire on December 31 for businesses and state and local governments, which Republicans said were an unnecessary government interference in private business.

But it does not prevent similar programs from being created.

In the 11 months since the first cases of the new coronavirus were documented in the United States, COVID-19 has put millions of Americans out of work, with unemployment rising.