Australian fossil fuel workers say they know the writing is on the wall and want help transitioning into a renewable future, so they can save their communities before it’s too late.

It comes as new research shows if Australia starts to transition its labour market force away from fossil fuels, we can avoid any involuntary redundancies or disruption to communities.

An oil refinery worker in Victoria, who has spoken to The New Daily on the condition of anonymity, says the community is increasingly concerned they are being left without a plan.

George has been working in fossil fuels for over a decade. He said there’s a misconception workers in the industry are married to oil and coal – really they just want to make sure their jobs are protected.

“You can’t just switch off fossil fuels today and then switch on renewables tomorrow because you know, the country’s not set up for it,” he said.

“It’s going to take massive change over a number of years to do it.”

The refinery already goes through a massive overhaul every 25 years, and there was no reason the next one could not be renewable, he said.

Inaction from the federal government has helped put his job – and the roughly 350 others at his plant – in jeopardy.

“The government’s been happy to sit back and watch it happen,” he said.

The subsidy may save Australia’s three last oil refineries – but it is propping up a dying industry.

“We’re gonna have to transition eventually, it might be in 20 years or something. But in the meantime, a local refining industry is important for a whole bunch of reasons,” George said.

“There is a whole lot of stuff hanging off the back of the refinery. There are probably five or six times the amount of people that are directly employed,” he said. “The community worries about it.”

Angus Middleton, a delegate at the United Workers Union represents the refinery workers. He said they’ve started a working group to determine what a renewable energy transition would look like.

“This project straddles the opportunities of renewables and green hydrogen – and the possibilities of diverse advanced manufacturing in the industries downstream of the refinery,” he said.

He’s bringing together plant workers to look at what skills they’ll need in the future and how they can protect their communities, and he wants governments to come on board.

“We can’t settle for a piecemeal transition,” he said.

“We need to take a look at the whole system, from the energy sources to the refinery, to the downstream chemicals sector, to fully appreciate the challenges and opportunities this transition would create.

“Without doing so, we won’t get the most out of the inevitable transition.”

A new report from Australia Institute’s Centre for Future Work has found we can transition to renewable without losing a single job.

Around 133,000 people were employed in fossil-fuel jobs in 2019 –around one per cent of Australia’s total jobs.

Approximately 50,000 of those jobs are in the coal industry.

Centre for Future Work director Dr Jim Stanford said their analysis – commissioned by health and community services superannuation fund HESTA – showed the government could save jobs by planning and communicating a transition.

“A clear long term timetable is critical,” he said. 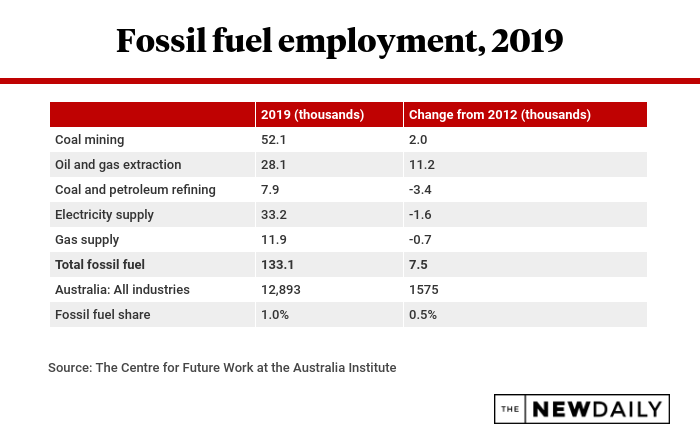 Across the fossil fuel industries, most of the workers are older, which mean the majority of jobs could easily be phased out by people entering voluntary retirement over the next 20 years.

“One thing I found is fossil fuel workers are older than the typical Australian worker so most of the adjustment required and be achieved through normal retirement,” he said.

“That only works if we don’t get new people coming in to backfill those positions.”

If we started planning now, we would only need to transition roughly 3000 jobs, and this could be done easily, he said.

“Over two million Australians change their jobs every year. So the scale of the challenge is manageable.”

That could be managed by assuring workers received the same pay with government top-ups for five to ten years in their new jobs, he said.

“In the big picture, even generous incentives for retraining would be small potatoes compared to the other costs that we are facing.”

Importantly the economy is turning away from the fossil fuel industry, he said.

“The claim the economy depends on it is absolutely false. The evidence is clear already. Fossil Fuels will never again lead to Australia’s economic growth. We might as well accept that,” he said.

Some have already made the jump.

Chris Barfoot was a third-generation coal miner who worked in the industry for over 30 years – at Victoria’s Hazelwood plant.

Now he workers in renewables. He said transitioning is painful but needs to happen.

“It’s painful, there are no two ways about it,” he said. “The thing for Hazelwood, we recognised it had reached the end of its life.”

He said they had been trouble getting financed, the cost of wind and solar were dropping, and support from the major banks was slipping.

It was clear renewables were the future, he said.

“The writing is on the wall and the sooner you start planning the better.

“You need to start thinking about transition early so when they come to the point of closure there are jobs there. If you wait till it comes, you’ll see a drop in pay and an effect in the community.”