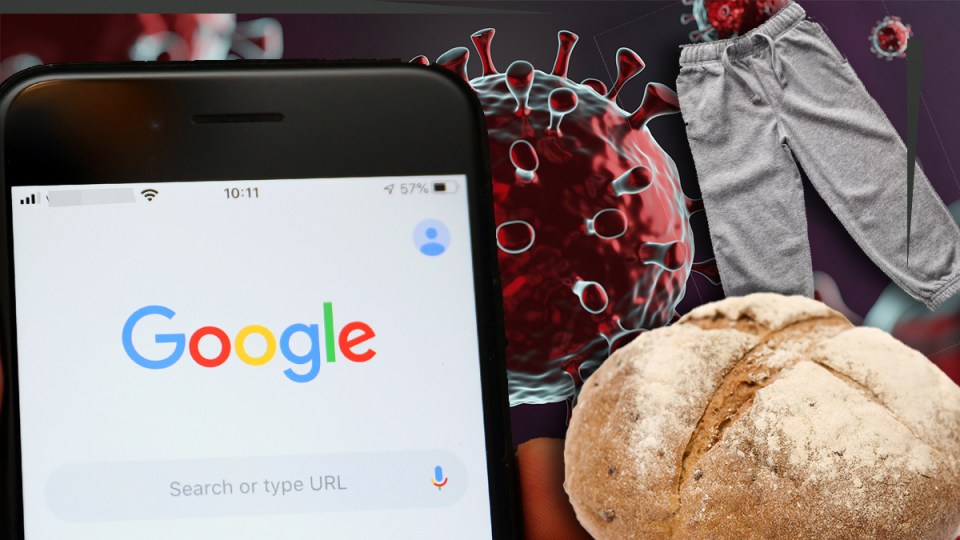 Sourdough bread, track pants and the coronavirus were among our most popular searches in 2020. Photo: TND

COVID-19, bushfires and sourdough bread dominated Australian searches on Google this year, but one curious slip of the tongue from Scott Morrison saw Australians set an unlikely global record.

Zoom, toilet paper, Kobe Bryant and home workouts were also top of Australians’ minds in 2020, while we were five times as engaged in the US election as we were in our own 2019 federal poll.

The findings come from Google Australia’s annual list of ‘Trends’.

Perhaps surprisingly, the US election was the number one trending search for 2020 in Australia, followed closely by coronavirus and the NBA.

With everyone stuck at home, video-conferencing software Zoom came in number four on the trending searches list, followed by ‘coronavirus symptoms’ and basketball legend Kobe Bryant, who was killed in a helicopter crash in January.

Further searches linked to weather, bushfires, COVID and the American election filled out the top 10, with COVID dominating Google search activity in Australia in a number of ways.

We hunted down information about symptoms and testing, but isolation was also high on everyone’s minds.

Australians searched ‘how to make sourdough bread’ more than any other country, and also led the world on interest in home workouts.

Australia has searched more for exercise equipment than any other country,” Google Australia said.

“Exercise has also never been more searched in Australia than it has this year … Dumbbells, weights, treadmills and exercise bikes are also at a record high this year in Australia”.

‘Toilet paper’ was also number five on the list of the top trending news searches, likely sparked by hoarding and short supplies of the precious essential item at various stages of the pandemic.

Australia was actually “the top country for search interest in toilet paper this year”, Google said.

‘Fires Near Me’ – the critical bushfire information mapping and warning tool – was the third-highest searched news item, as the country battled devastating blazes at the start of the year.

And politics was also a key question on many minds, with state lockdowns, national announcements, border restrictions and the US election all dominating the year.

“Singapore, Australia and New Zealand are the top three countries searching for “US election” in 2020. In Australia, the US election even trended higher in search than the bushfires.”

But one more light-hearted search that rocketed up the charts came after one of Mr Morrison’s late-night press conferences in the early stages of the pandemic, as he read out a long list of services which would be closed nationwide under lockdown measures.

Barre is a ballet-inspired physical workout, using a dance bar. It is said like the word “bar”, but a perplexed Mr Morrison pronounced it “bar-ray”.

“I might need some help with that. I’m not quite sure what that is, to be honest,” he admitted at the time.

The rare humorous moment led to a massive spike in searches for the term, which Google said “hit an all time high in Australia in March after the PM’s viral press conference gaffe”.

“As a result, Australia is also the no. 1 country searching for Barre in 2020,” Google Australia said.

Mr Morrison ended up taking a barre class himself last month when he visited Melbourne, poking fun at his own mistake.

Rounding out the top 10 trending ‘definition’ searches was the term ‘Karen’, one we’ve all come to know during 2020.

Disease concern for survivors of Afghanistan earthquake
Steve Smith confirmed as starter for first Test against Sri Lanka
Deadly Norway shooting treated as Islamist terrorism: Police
Matildas will be keen to forget 7-0 drubbing by Spain
Upcoming stats will reveal where and how hard rates are hitting economy
Victorian MPs pocket a tidy 2.75 per cent pay raise
Geoffrey Adams expected to die before sentencing for killing his wife Colleen in 1973
Today's Stories