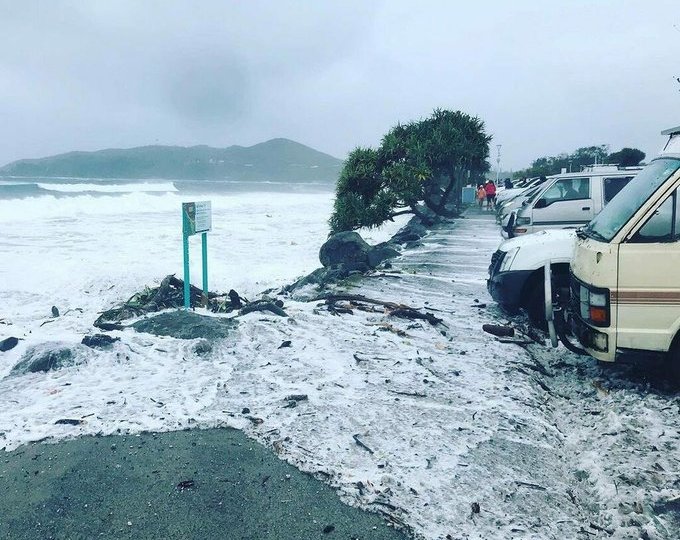 The extreme weather hitting the northern NSW coast is continuing into Tuesday morning, with the residents battening down from the dangerous rainfall and strong winds.

Wind gusts have been as high as 104 km/h at Cape Byron, with the weather bureau warning of winds strong enough to bring down trees and power lines.

Other beaches along the NSW northern coast are being eroded after huge tides, gale force winds and heavy rain washed away much of the Main Beach at the popular tourist town of Byron Bay.

Authorities have asked residents to beware of the dangerous conditions, warning them to protect their homes and animals, stay on top of the latest warnings, and avoid driving through flood waters or swimming at beaches.

The rain will likely ease late on Tuesday.

Federal Emergency Management Minister Stuart Littleproud said the government was “very concerned” about the weather system, but agencies were prepared.

“We knew that we would have to pivot quickly from bushfires to La Nina … We have been ready for this, we have practised for this,” he told ABC TV.

The NSW State Emergency Service had received more than 900 requests for help by Monday afternoon, with 160 logged between 6pm on Sunday and 1pm on Monday.

Four people have had to be rescued, including a woman who was swept away when she tried to leave her car after getting caught in floodwaters.

The rain has produced significant overland flash flooding with more flooding likely to continue even after the worst of the rain subsides.

In the past 24 hours, the Gold Coast and Sunshine Coast had the highest rainfall, with 186 millimetres at Upper Springbrook and 188 millimetres at Maleny.

“[There is] a deep low- pressure system sitting off the coast of Queensland, bringing with it heavy rainfall, strong winds and dangerous tides,” the BOM said on Monday afternoon.

As the Christmas holiday break approaches, with state borders opening and family and friends reuniting after a COVID 2020, dozens of coastal towns have been battered by 100km/h winds and days of rain – topping 400 millimetres in places – causing riverine and flash flooding.

Queensland Emergency Services Minister Mark Ryan has warned of the cyclone-like impact of the extreme weather event and said residents must prepare for the worst.

“Many of the impacts from this weather event will be similar to a category-one cyclone event,” he said.

Power supply company Energex took to Twitter on Monday at 1pm to update 16,000 customers without power.

“Severe weather has flooded parts of the underground network and blown large trees across powerlines. Stay safe SEQ and keep away from flooded network and fallen powerlines.”

As the tidal surge from a king tide breached Bribie Island, Queensland Park alert urged people to stay away: “Severe weather is causing considerable issues on the northern part of the island. This section of the island is closed to vehicle traffic and boaties should not be anywhere near the area. The situation is being monitored.”

The BOM has issued a severe thunderstorm warning for heavy rain in the Wide Bay region north of Brisbane, including Bundaberg.

It is warning about more showers and storms next week, with those conditions continuing right up to Christmas.

A flood watch is current from Fraser Island to the NSW border and there is a minor flood warning for the Logan River.

The low-pressure system off the southeast Queensland coast is expected to bring another round of very heavy rain and strong and damaging winds, with gusts of more than 100 km/h in some areas forecast.

The weather bureau also warned of severe thunderstorms in Darwin’s Top End on Monday, with possible flash flooding in places including Borroloola, Minyerri and the Carpentaria District south of Ngukurr.

Brisbane was bracing for gale-force winds of up to 100km/h on Monday afternoon, while further south coastal towns were bunkering down for another 24 hours of extreme weather.

The NSW SES said waves of up to 10-metre from the storm were coinciding with the largest tides “for this time of the year as we approach the summer solstice”.

More than 900 NSW residents have called the SES for help in the past three days. That included four flood rescues.

“The combination of the waves and the really high tides means we’re seeing quite significant beach erosion at the moment up near the Queensland border and the expectation is we could see some more further down the coast, down towards the mid-north Coast as well as the northern rivers.”

Emergency workers from Port Macquarie up to the Queensland border at Tweed Heads helped residents put tarpaulins on roofs, cleared roads and removed the trees. They were busiest in the Tweed, Murwillumbah and Coffs Harbour areas.

An evacuation order has not yet been issued (by 2pm Monday) but the NSW SES warned it could happen.

Byron Bay residents experienced a king tide of 1.9 metres on Monday morning, as sandbagging efforts continue along the main beach.

“We are seeing some of the largest coastal erosion we have seen many years especially round Byron Bay which is changing the entire landscape of the beaches,” SLSQ said.

“It changes tide formation of the beaches, and starts to develop new permanent rips along beaches.

At least 14 schools along the northern NSW coast have also been closed, with a Department of Education confirming flooding in the area.