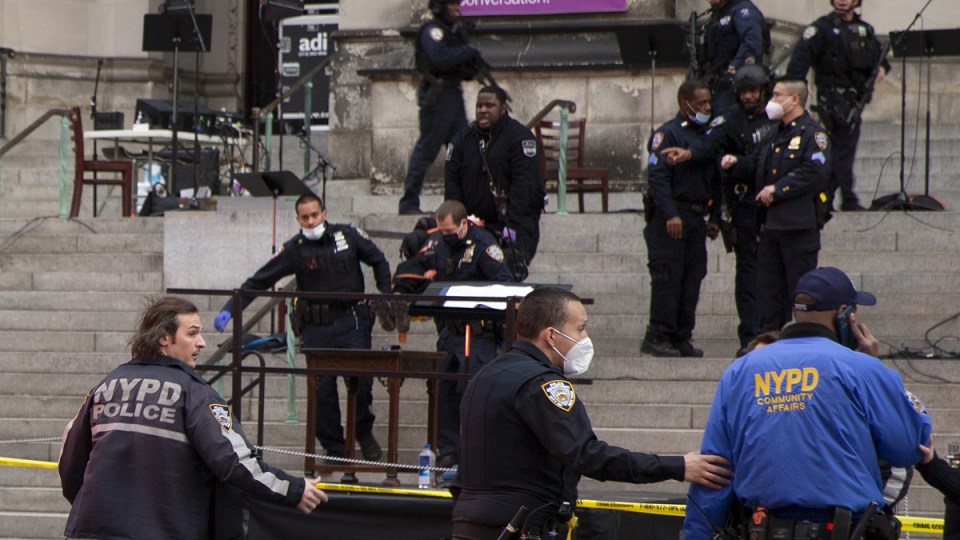 New York police officers carry a suspected gunman in a stretcher down the steps of Cathedral Church of St John the Divine. Photo: AAP

Police in New York have shot dead a man after he opened fire at the end of a Christmas choral concert on the steps of a Manhattan cathedral.

The shooting happened just before 4pm on Sunday (local time) outside the Cathedral Church of Saint John the Divine, mother church of the Episcopal Diocese of New York and seat of its bishop.

It was believed to be the cathedral’s first performance since the coronavirus pandemic hit New York City.

New York Police Department spokesman Sergeant Edward Riley said the gunman had fired on police, but no officers or bystanders were believed to have been injured in the late-Sunday afternoon violence on Manhattan’s Upper West Side.

The suspect, who was not identified, was rushed to a local hospital in critical condition, where he later died.

The shooting occurred outside the city’s landmark Cathedral Church of St. John the Divine, located at Amsterdam Avenue and West 112th Street, about 15 minutes after the conclusion of an outdoor choir performance on the church steps drew an audience of about 200 people.

The choir’s annual Christmas holiday concert had been moved outside in keeping with COVID-19 health safety rules.

Only about 15 people were still present when the gunman appeared at the top of the steps, screaming, “Kill me,” and “shoot me,” as he fired a handgun, sending bystanders running for cover in panic, according to a Reuters photographer who was on the scene.

Police officers who had taken cover ordered the suspect several times to drop his weapon before shooting him, the photographer said.

Members of the choir were already back inside the church by the time of the shooting, which lasted several minutes.

Reuters photographs of the gunman showed him wearing a black winter coat, a white baseball-style cap and a face mask emblazoned with the flag of the Dominican Republic, as he stood wielding two pistols, one in each hand. He also was carrying a large backpack strapped to his shoulders.

Police said officers recovered two firearms from the scene after the shooting.

The New York Post reported the man fired his weapon into the air before being shot by a responding Emergency Services Unit officer.

“He was shooting it up in the air and toward police,” a high-ranking department source told the Post.