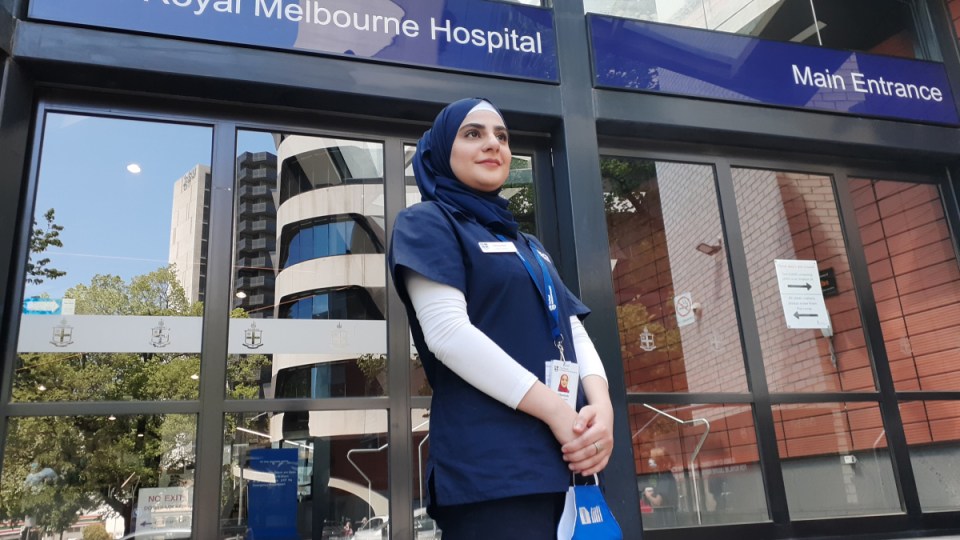 Ghanieh Daghagheleh escaped Iran by boat, was locked up in Indonesia six times, held on Christmas Island for six weeks, then spent another six weeks at a detention centre in Darwin.

Now she’s on the front lines of Australia’s fight against COVID-19.

Since September, the midwifery and nursing student, who is entering her final year at Victoria University, has been working at the Royal Melbourne Hospital and helping care for ICU patients who have developed coronavirus symptoms and are awaiting their test results.

Ms Daghagheleh, 25, knows what it’s like to feel you’re on the brink of death.

But unlike her patients, she wasn’t surrounded by anyone who could help her. Rather, she was crammed on a boat with about 130 others. She had no food, no water, no space to move, and no idea where she was.

“I even said my last words to my mum,” Ms Daghagheleh told The New Daily.

Ms Daghagheleh was 17 when she was handed an ID band with a number on it that authorities on Christmas Island could use to identify her.

It made me feel very inhuman, that I was just a number during that time,” she said.

As well as being a nursing assistant, the single mum is also a community officer with Ambulance Victoria, a scholarship recipient and the first refugee from Iran to become a lifeguard in Australia.

But it’s been a long journey to get to where she is today.

Ms Daghagheleh was in her final year of school when her parents told her they had to leave Iran because it was no longer safe for them.

“We actually had no idea about, you know, what migration is or how people migrate. What is refugees or seeking asylum?,” she explained.

“I had no idea … what is illegal or what is legal.”

But Ms Daghagheleh never questioned her parents’ decision to escape.

“In our culture parents are the heads of their family. Whatever they say or whatever decision they make … we just say ‘yes’ to it,” she said.

Ms Daghagheleh said she waited to board what she expected to be a big ship that looked like something you’d see in a movie.

But things weren’t what they seemed. Ms Daghagheleh was shocked to be directed to board a “very tiny” wooden boat with about 130 others.

As they attempted to pass through the territorial waters of Indonesia on their first day, local authorities stopped the boat and detained everyone on board.

After a few days, Ms Daghagheleh along with her four younger siblings, mum, and some other detainees managed to run away.

But as they were about to get back on their boat, they were caught by Indonesian police and bussed back to the centre.

“The two buses in front of us crashed,” Ms Daghagheleh recalled.

They made it on their seventh attempt but it wasn’t smooth sailing from there.

Ms Daghagheleh didn’t eat. Two Indonesians who were leading the boat brought with them some bananas and water, but she felt so sick she kept on vomiting.

Ms Daghagheleh went from thinking she would get her own bed to having to sleep sitting up.

“At night, it was just black. You could absolutely see nothing or where you are,” she said.

The group spent a total of three days and two nights at sea before being intercepted by the Australian Navy, which Ms Daghagheleh said was a moment of pure joy.

“I was so happy; I could see the light,” she said. “We were all like screaming from the happiness. I felt like I was given a second chance in life.

“If the navy didn’t rescue us … most likely we would have died.”

Ms Daghagheleh was so sick that when she arrived at Christmas Island, she passed out as she was taking a shower.

She later found out that the friend she made while detained in Indonesia had suffered a haemorrhage and died on the way to Christmas Island.

“We just saw her husband and her child, and we were just crying. We just couldn’t even believe it,” she said.

Ms Daghagheleh spent six weeks at Christmas Island, and was then transferred to a detention centre in Darwin for another six weeks before being granted a bridging visa and sent to live in Melbourne.

“Nowadays, when I talk to my dad, he says, ‘Believe me, I didn’t know that it is like that. They said that it is a big ship, you’re going to have your own bed and it’s very safe, otherwise I would never put you in such danger’,” she said.

“But at the end of the day, we didn’t have any other way.

We didn’t have another choice. We had to leave, and we did, and I’m glad that we did.”

Ms Daghagheleh said the experience has taught her to never give up.

“When I want something, and I fail, I’m like, yeah, you know, I failed to come to Australia six times.”