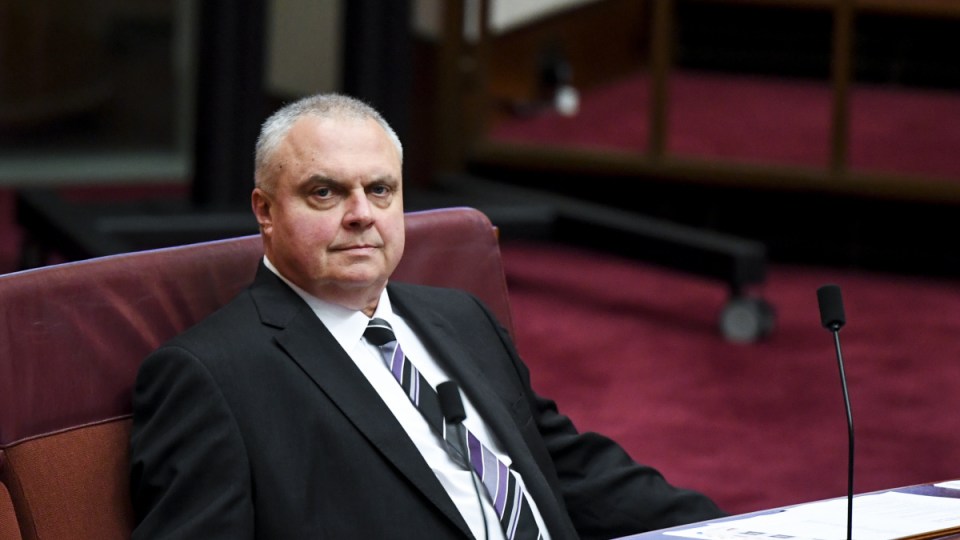 Stirling Griff said he could not support the bulk of the bill Photo: AAP

South Australian senator Stirling Griff was ducking outrage on Thursday, after his last-minute parliamentary backflip that allowed the government to extend the cashless debit card scheme in a marathon Senate sitting.

Senator Griff, of the Centre Alliance, has not explained his surprise decision to abstain from voting on the card, which let the Coalition’ plan pass by just one vote.

The plan to make the card permanent in four trial sites and extend it to the Northern Territory failed. But with 11th-hour amendments, the government proposed to instead extend trial sites for two more years.

After it scrambled to alter the bill, it passed 34-33 after midnight on Thursday.

Senator Griff had previously opposed the scheme, which restricts how welfare recipients in several regional areas can spend their money.

But, following Thursday night’s frantic debate and amendments in parliament, he instead chose not to vote at all. He has not explained that decision.

“Centre Alliance have hoodwinked and misled the people of South Australia and those on the cashless debit card. They’ve assured voters for weeks now they would not support this racist, punitive bill and tonight they flipped on that promise, devastating thousands.”

Labor, the Greens and welfare advocates are demanding Senator Griff explain his actions – and reveal if he was offered any encouragements by the government in a horse-trading deal. But the South Australian did not surface on Thursday.

He has not commented publicly on his decision to abstain, and is understood to have left Parliament House long before the final vote early on Thursday. His offices in Canberra and Adelaide have diverted their landline phones to voicemail. The blinds in his Parliament House office are firmly shut, with the door locked.

When The New Daily knocked on Senator Griff’s office door, a staff member said he was not available. We were referred to his Centre Alliance colleague Rebekha Sharkie, the member for Mayo. But her spokesperson said Ms Sharkie was also unavailable and unlikely to comment on Thursday. TND has sent written questions to her office about the cashless debit card vote.

“He left the building. And I think it was quite disgraceful, really,” she told the ABC.

For @MakeMayoMatter & @Stirling_G to back out at the last minute is just heartbreaking and unforgivable.

This is a shameful dirty deal.

I am so sorry that this card is continuing.

“You cannot trust someone who doesn’t even vote in this place. We were not sent here to abstain from votes,” she said.

“We were sent to vote on issues, to put down our opinion in the voting record. When someone like Stirling Griff cannot even vote on such an important issue, I say to everyone who has voted for Centre Alliance what does that mean for your vote, it counts for naught.”

For welfare recipients involved in the cashless card trial, up to 80 per cent of their benefits are quarantined on the cards and cannot be spent on alcohol, gambling or withdrawn as cash.

The card is used in Ceduna in South Australia, the East Kimberley and Goldfields in Western Australia, and Bundaberg and Hervey Bay in Queensland.

The Morrison government said it was aimed at stamping out alcohol and drug abuse. But community groups have criticised it as racist and paternalistic, as the majority of people on the cards are Indigenous.

“Continuing this policy is a massive mistake,” she told parliament.

Senator Siewert said the Greens would continue to campaign to scrap the card.

“The CDC is dehumanising and attempts, unsuccessfully, to treat the symptoms of colonialism and dispossession,” Amnesty International Indigenous rights campaigner Nolan Hunter said.

“It is devastating to have this legacy of paternalistic and discriminatory policy-making continued with the Cashless Debit Card,” added Change The Record’s Cheryl Axleby.

Dr Cassandra Goldie, CEO of the Australian Council of Social Service, called it “punitive and demeaning”.

“This card discriminates against Aboriginal and Torres Strait Islander peoples, is impractical, demeaning, unproven and expensive,” she said.