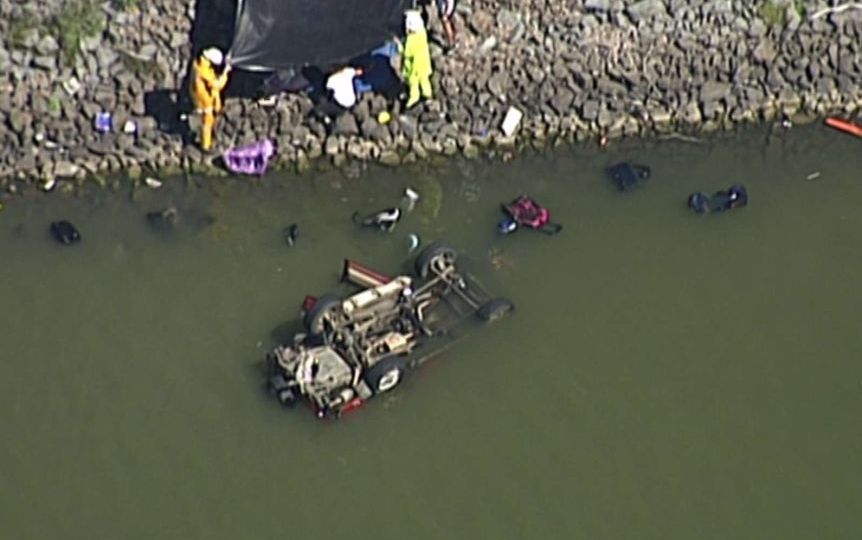 Two children died in the crash, while two others and two adults were injured. Photo: ABC News

Two children, aged five and 13, are dead and a toddler is in a critical condition after a car crashed into the water at Wyaralong Dam, near Beaudesert, in south-east Queensland.

A six-month-old baby, a one-year-old toddler and two adults are in hospital.

Queensland Police Inspector Douglas McDonald said the adults and four children were in a Land Rover Discovery when it crossed onto the wrong side of the road and broke through a road barrier, rolling down an embankment before ending up on its roof in the dam.

Passers-by, including two off-duty doctors and a paramedic on a day off, helped pull people out of the submerged car.

“It’s absolutely tragic for the family. It was fantastic work [by the passers-by] to help rescue to occupants.

“Their actions were pivotal in making sure this wasn’t worse.

“We are still looking into the circumstances which led to the crash.

“At this stage, the vehicle is still submerged, police divers attending.

“It’s relatively shallow. The vehicle is on its roof. The wheels can be seen above water.

“We expect to be here until this evening conducting investigations.”

Three rescue helicopters and more than a dozen emergency vehicles attended the incident, which happened about 2pm near the Overflow Estate Winery.

One police vehicle flipped as it rushed to the scene, but no officers were hurt.

The two adults in the Land Rover – a woman in her 30s and a man in his 20s – were transported to the Princess Alexandra Hospital by road. Both suffered leg injuries.

Mark Nugent from the Queensland Ambulance Service said the actions of passers-by helped save lives.

“The six-month-old was removed from the water. There was no CPR [done] on that little one and they were conscious the whole time,” he said.

“The emergency response was exceptionally good.”

Police said they expected the road to be closed until at least 8pm.