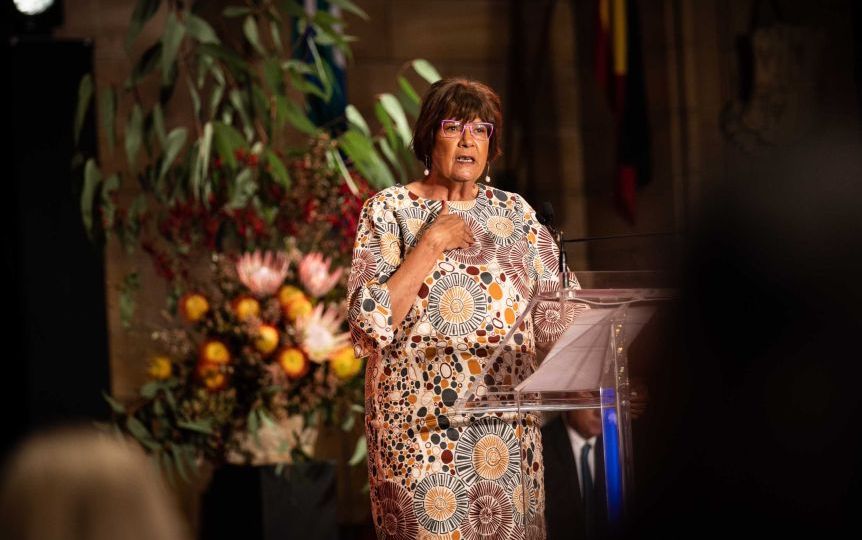 Governments must continue to prioritise working in partnership with Indigenous organisations to achieve positive outcomes for First Nations people, Aboriginal leader Pat Turner AM has said on Thursday night.

Speaking at the 20th anniversary of the Dr Charles Perkins Oration and Prize, hosted by the University of Sydney, Ms Turner used her keynote address to outline a blueprint for how Australia could move towards a future of greater acceptance and equality.

“We have a shared future – Indigenous and non-Indigenous Australians, together – and the two sides must come together to deliver lasting equality and recognition for Aboriginal and Torres Strait Islander peoples,” Ms Turner said.

The Dr Charles Perkins Oration provides an esteemed platform for the discussion of race relations in Australia.

In 2020, the theme is still relevant with the broader Australian public forced to once again reconcile with uncomfortable truths, just as it did in 1965 when Charles Perkins led a bus tour across NSW, known as the Freedom Rides.

Over the past 12 months, issues such as the over-representation of Indigenous people in the criminal justice system, an ineffective Closing the Gap strategy, and examples of blatant disregard for culturally significant Aboriginal sites have laid bare the inequality still experienced by Aboriginal and Torres Strait Islander people, Ms Turner said.

“Lasting change can only come when it is embedded in the culture of organisations and traditionally Australian governments are … slow to adapt,” Ms Turner said.

Ms Turner said Dr Perkins had led the fight against racial discrimination and segregation by mobilising the mainstream media and Aboriginal communities in unprecedented ways.

“He wanted Aboriginal people, his people, to see that we deserved more, should demand more, and could be more,” she said.

Perkins ‘held a mirror to the nation’

Dr Perkins knew that for Australia to face up to the plight of Aboriginal people, they had to be shown what was right in front of them.

Through his outspoken and sometimes controversial advocacy, he challenged Australia to confront its own history, sparking debate and opportunities for change.

“His role in instigating and undertaking the Freedom Rides in 1965 changed mindsets in mainstream Australia,” Ms Turner said.

Inspired by the American Civil Rights Movement, the Freedom Rides exposed wider Australia to the poor state of Aboriginal health, education and housing.

Stops in Walgett, NSW, where Aboriginal people could not enter the RSL, and Moree, which excluded Aboriginal children from swimming in the local pool, attracted national attention.

“Charlie held a mirror in front of this country and exposed the discrimination and racism our people endured,” Ms Turner said.

Throughout the 1970s, Dr Perkins focused his advocacy on the need for greater self-determination, governance and community control.

“He was not just an advocate who gave speeches, wrote articles, and carried flags at rallies. He chose to engage with governments directly – to step inside the tent,” she said.

Ms Turner said it was this which inspired her to “forge her own path”, as one of Australia’s most respected and accomplished public servants.

‘Change systems from within’

Historically, developing meaningful relationships with governments has proven difficult for those within the Aboriginal community-controlled sector.

Dr Perkins worked hard to bridge the gap, and became the first Indigenous Australian to head a government department.

“He understood that a solution was also required to the structural problem caused by our people being excluded from the colonial institutions established to govern Australia,” Ms Turner said.

In order to bring about substantial reform, Ms Turner said activists needed to “know, understand and be part of the systems you want to challenge and change”.

As the CEO of the National Aboriginal Community Controlled Health Organisation, and with the experience of a lengthy career in public service, Ms Turner is well versed in the intricacies of both government and the community-controlled sector.

“Achieving equality for Aboriginal and Torres Strait Islander peoples requires more than governments providing funding for health, housing, essential services, education and employment of our people – important as this is,” she said.

In her role as convener of the Coalition of Peaks, an alliance of more than 50 Indigenous peak bodies, Ms Turner has been a driving force in negotiating a new framework for the Closing the Gap strategy.

The latest Closing the Gap report, released in February this year, found only two of the seven targets to be on track – forcing the government to urgently rethink its strategy for developing policies and programs affecting Indigenous Australians.

“The National Agreement commits the country to a new way of working between governments and Aboriginal and Torres Strait Islander people to address the inequities that our people continue to face,” Ms Turner said.

Forging effective working relationships with governments was essential, she stressed, because community organisations could not do it on their own.

“We believe ultimately, a partnership between community-controlled organisations and governments will achieve better outcomes for Aboriginal and Torres Strait Islander peoples – where we are both inside and outside of the tent,” she said.

The importance of holding governments to account was where the community-controlled sector could play a significant role in shaping the future.

“Through their involvement in policy and political advocacy, our organisations also provide a voice for Aboriginal and Torres Strait Islander peoples. Without them, the accountability of governments would be far weaker,” she said.

Ms Turner was also critical of the lack of movement on the aspirations set out in the Uluru Statement from the Heart, which was released on May 26, 2017, by delegates to the First Nations National Constitutional Convention.

She said a First Nations Voice to the Commonwealth Parliament, to monitor and advise on making laws with respect to Indigenous people, was still missing from the political and policy landscape.

“So too is national Truth-Telling and Treaties.”

The Morrison government has opposed giving such a body any constitutional basis, or allowing it to directly advise Parliament.

Subsequently, a senior advisory group was established to develop options for an Indigenous “voice to government”, of which an interim report was handed down to Minister for Indigenous Australians Ken Wyatt in October.

Governments will need to demonstrate that their institutions and bureaucracy can embrace change and reform, as historically this has proven difficult.

Ms Turner said the fact that Indigenous people have now been afforded “a seat at the table” through The National Agreement on Closing the Gap is not only a significant step in the right direction but a long-held ambition of her uncle, Charles Perkins.

“Charlie’s approach to life must continue to inspire us all to more unified and purposeful action,” she said.

“Action where Aboriginal and Torres Strait Islander people are collectively taking back control of our own affairs.”

The Dr Charles Perkins Memorial Oration, delivered by Pat Turner AM, will air Friday at 8pm on ABC Radio National and on ABC TV on Saturday at 2.30pm.